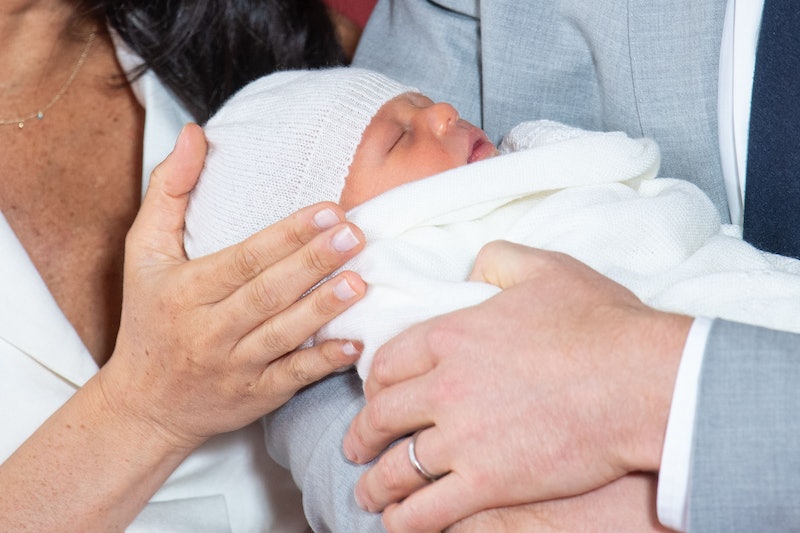 On Monday, May 6, Prince Harry and Meghan Markle's first child came into the world. Two days later, the newborn boy has finally been revealed to the patiently waiting public. And the first photos of the royal baby are more adorable than you could ever have imagined.

In the afternoon of May 8, Harry and Meghan posed alongside their two-day-old son for several pictures in a hugely grand room at Windsor Castle. The baby boy remained asleep throughout and was hidden away in a white blanket and bonnet. As the Telegraph reports, the couple dressed their son in a £105 shawl by Nottingham-based company G.H.Hurt & Son. The brand has clothed every royal baby since 1948.

Since giving birth, Meghan and her husband have spent some precious personal time with their child in Windsor's Frogmore Cottage. According to a statement from the royal family, Meghan's mother, Doria Ragland, has also been staying with the couple.

The royal baby is set to spend his first week meeting other members of his family. As Hello! magazine reports, the Queen is due to meet her eighth great-grandchild on Wednesday after attending the Royal Windsor Horse Show. Harry and Meghan confirmed this during a brief interview, stating that Prince Philip will also be present. Prince William and Kate Middleton are still yet to meet their new nephew, but the Duke of Cambridge did welcome his younger brother into the "sleep deprivation society", reports the Guardian.

If you were wondering whether the Queen has to approve a royal baby's name before it is announced to the public, here's the answer. The Queen has the power to bestow a royal title upon any newborn, but does not have the ultimate say over its name, reports the Independent.

"In the case of names, it is more of an informal conversation," royal commentator Kate Williams told CNN. "Of course they have such respect for the Queen that if she says, 'I really don't like that name,' they'd definitely take that into account."

A name is yet to be announced, but it is expected that the public will find out what the couple have chosen by the end of the day on Wednesday. People have been betting on names over the past few weeks. According to bookmakers, traditional names are still the favourite, despite Harry and Meghan's penchant for breaking royal norms.

Alexander appears toward the top of the list along with Spencer. The latter would be a fitting tribute to the Duke of Sussex's late mother. Princess Diana's maiden name was Spencer. Other contenders include Theodore, Arthur, James, Philip, and Albert.

"We have a new favourite in our market for the name of the royal baby and it is Spencer that is attracting all the late money from punters getting their bets on," Coral spokesperson Harry Aitkenhead told the Express. "It’s impossible to ignore the link with Diana and it is now the clear leader at 3-1."

He added that the level of interest around the new royal baby's name has been unprecedented: "A royal baby is always a popular betting event from a novelty point of view but this latest royal has broken almost all the records and it’s been amazing to see just how popular Prince Harry remains."

Whatever baby Sussex ends up being called, it's clear that the public will be following his every move over the next few months. Here's to more cute photos.