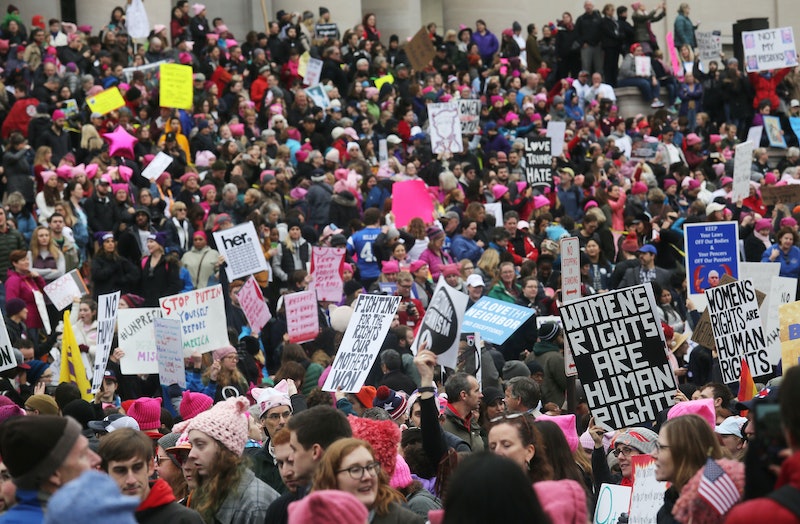 By now, you're probably well aware that thousands of people across the globe are protesting the presidency of Donald Trump. While Washington D.C. was decidedly pretty empty for Inauguration Day on Friday (that is, it was compared to inaugurations in the past), the city is now crowded with Americans who are standing up for people's basic human rights. But if you couldn't make it to D.C. for the protest, you'll be glad to know that tons of people did, and there are many incredible photos of the Women's March crowds to prove it.

Personally, I'm pretty bummed that I couldn't be in the capital city to protest with my fellow women. But, looking at the photos of the Women's March are giving me the hope I thought I lost since Trump was elected. People are taking a stand, and the crowds are proving that we won't give up our rights without a fight. Initially, 200,000 people were expected to show up to march in D.C. By Saturday afternoon, the number of people participating was estimated at 500,000. Not to state the obvious or anything but, uh, that's huge.

If you're hurting over Trump's presidency, take a look at the crowds that formed for the Women's March. There are good people still in the world, and they're all gathered in unison to take a stand, because as Hillary Clinton taught us, we are indeed stronger together. These photos of crowds at the Women's March prove we won't let injustices go quietly.