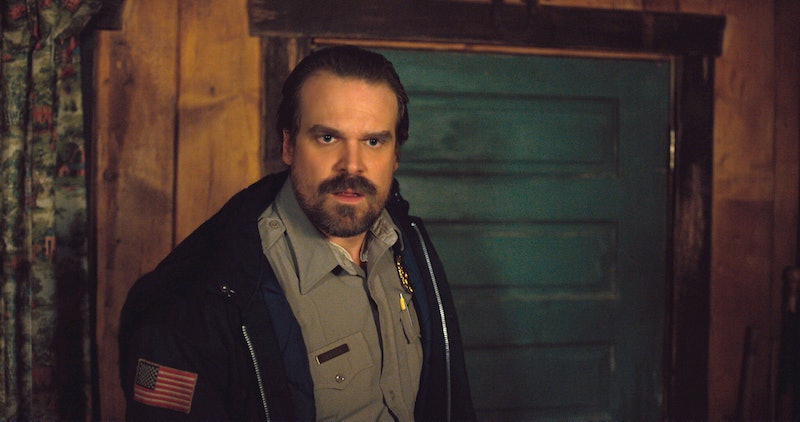 It's at times like these when we should be eternally thankful for the internet. Apparently, the twisty, epic Stranger Things Season 2 didn't leaves fans shook enough. So, actor David Harbour took it upon himself to post some of his throwback photos, and now social media is really not OK (in the best way possible, obviously). These pictures of young David Harbour before Stranger Things have fans going crazy, not only because he was a total dreamboat, but because he's a spitting image of one of his fellow Stranger Things stars.

Although many are convinced the dawn of reboots and nostalgia is dead, Harbour, star of the '80s-inspired show, stuck it to them with his photos by proving that certain things never go out of style. Stranger Things fans know him as the hardass, dad-like figure, Police Chief Jim Hopper. But on Monday, they learned he was once a dreamy '80s teen with a hair flow that couldn't be stopped.

The 42-year-old posted a photo of his young self next to a current photo of current 25-year-old Joe Keery (Steve Harrington). The resemblance is crazy, and Harbour provokes those who doubt the power of nostalgia with his caption: "So sick of these slick, handsome reboots. This nostalgia...Hollywood is just fresh out of ideas. Watch the original." Yes, the ladies are going wild, and no one is doubting the glory of a good throwback.

One fan wrote, "Godd*mn I wish I was a time travel[er]" and another commented, "why do you guys look so amazing." Others point out how similar the two look, but, overall, no one is mad that this is happening.

And Harbour didn't stop there. He continued by teasing the internet, writing, "I hope this will teach you not to encourage me, internet." This was written on another side-by-side post with him, Keery, and young Dirty Dancing star Patrick Swayze. One fan wrote, "You guys are so incredible, love the show, everything is perfect, even Steves hair," and another said what the rest are thinking, posting, "Best thing on the internet right now."

Harbour's third post of him and Keery is enough to really put fans over the edge because of how similar they look. Where are the conspiracy theories? And/or blood tests? Fans are demanding answers about Harbour and Keery's uncanny resemblance. And while hard facts and answers may never be provided, they can fantasize about what could've been in the meantime.

One fan unearthed yet another photo of a handsome young Harbour and paired it with a throwback photo of his on-screen counterpart Winona Ryder (Joyce).

Fans really can't contain their chill when imagining those two as a young couple at Hawkins High.

Fans may also be so incredibly shook because this stud wasn't gracing screens when he was that young. Harbour's first TV break was a one-episode appearance in Season 4 of Law & Order: SVU in 2002 when he was 27. Just a few years later he appeared in Brokeback Mountain when he was 30, once manhood (and haircuts) took a hold of him. These new photos of the actor had to have been way before audiences first saw him on screen — probably in his late teens or early 20's.

Harbour's look (or hair) never quite went back to the way it was in the good old days. Before Stranger Things, he was known for his roles as CIA agent Gregg Beam in Quantum of Solace (2008), Shep Campbell in Revolutionary Road (2008), Dexter Tolliver in Suicide Squad (2016), and Masters in The Equalizer (2014).

Harbour as a young hair enthusiast may not have been truly discovered until now, but thanks to the internet, he's here to stay.