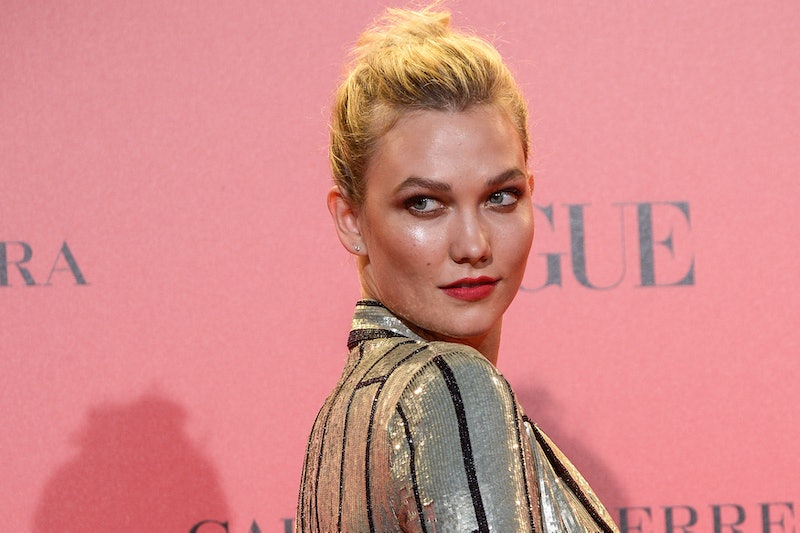 Karlie Kloss and Josh Kushner just became engaged after six years of dating, and the supermodel and coder shared the exciting news the usual way: by letting her friends and followers glimpse the jewelry that comes with the milestone. Kloss shared a photo of her engagement ring on Instagram Stories, sharing a close up peek of the cushion-cut diamond and platinum band.

Kushner proposed to Kloss during a trip to Upstate New York, and she confirmed it via an Instagram post where the two posed during a sunset. "I love you more than I have words to express,” she captioned. “Josh, you’re my best friend and my soulmate. I can’t wait for forever together. Yes a million times over."

The 25-year-old founder of Kode with Klossy has been dating the venture capitalist since 2012, but the two prefer to keep their relationship private, which is why you don't see the couple splashed across social media or walking red carpets together too often. But over half a decade of dating, they are now ready to take their relationship to another level.

After the official Insgram post was shared, Kloss then went on her Stories to give us a behind-the-scenes look at the excitement and joy she was feeling — and a closer look at the impressive ring.

While getting her makeup done for a shoot or campaign in Shanghai, she panned the camera across the skyline view from her chair at the hotel and captioned, "My phone is blowing up with the sweetest messages from loved ones. This poor make up artist is gonna kill me." She then flipped the camera to face her, and when the make up artist finished curling her lashes, she lifted her hand to the lens and smiled excitedly, giving the world a closer look at the rock.

But that wasn't all. The next story was a text screen, where Kloss wrote "One of the best parts of [getting engaged]..." and went on to share screenshots of her Facetiming with her closest family and friends, captioning their happy and surprised reactions. And in the corner where her small window is, we got to see her ring flash over and over again.

For example, in the Story with her grandmother, Kloss wrote "Grandma!! (She's still learning how to FaceTime :)" In the screenshot, we got to see the forehead of her grandma, and Kloss holding up the microphone of her earpiece to her mouth, bringing the diamond ring into close view.

Then when she was sharing the news with one of her friends, she flashed her left hand and shared her ring, capturing her pal's shocked expression perfectly.

While the details of the ring haven't been made public yet — like whether Kushner purchased it from a jeweler or passed on a family heirloom— but one thing is for sure: her square-cut diamond is a sparkler. The couple is obviously overjoyed over this new chapter in their lives, and are riding on the excitement of the engagement. Congratulations to the two, and here's to a year or two of hearing about their stylish wedding plans!