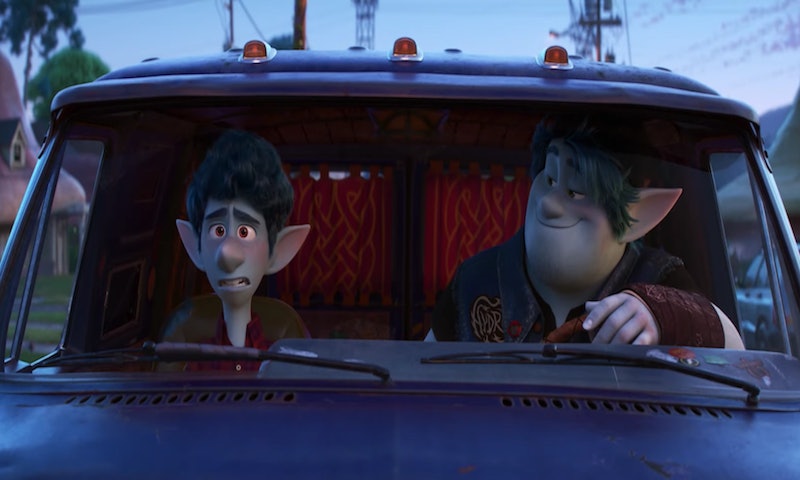 Star-Lord and Spider-Man have reunited in a new Pixar movie. Well, not really, but their IRL counterparts have reunited for the new Pixar animation, Onward. Unveiled on Thursday, May 30, the Onward trailer stars Chris Pratt and Tom Holland as Barley (Pratt) and Ian (Holland), two elf brothers who embark on a quest to discover if there’s still magic left in their world. Onward also stars Julia Louis-Dreyfus and Octavia Spencer, though they're seen only briefly in the clip. In the trailer, fans get a glimpse of Louis-Dreyfus’ character as the mom of the two teenage elf brothers when she forgets to walk the family's pet dragon.

Directed by Monsters University’s Dan Scanlon, Onward will arrive in theaters on March 6, 2020. At the D23 Expo in 2017, per Entertainment Weekly, Scanlon described the film as a “suburban fantasy” that follows the brothers' quest against the backdrop of a “mundane, modern fantasy world to somehow find a way to spend one last magical day with their father," who died when they were children. So, in other words, don’t forget the tissues. This is a Pixar film, after all. In fact, Onward was described by Pratt as, "in true Pixar form," one that "simultaneously moves and tickles." So, definitely expect it to give you some pretty intense feels.

According to Scanlon, Onward was inspired by his own personal quest for answers following his father’s death when he was a child. Set in a suburban humanless world inhabited by magical creatures, the movie consists of “a mix of the fantastic and the everyday,” Scanlon told the crowd at the 2017 D23 Expo. “There are mushroom houses that line the streets with satellite dishes sticking out the top of them and a minivan parked in front of each one. There are no humans… but there are unicorns everyone. They’re basically rodents, possums eating all the trash out of your bins.”

Following the unveiling of the Onward trailer, stars Pratt and Holland took to social media to gush about each other. Accompanied by the film’s official poster — which sees the two elf brothers perched on top of a van against a dreamy backdrop of their suburban magical world — Pratt wrote in a May 31 Instagram post, “@tomholland2013 and I play brothers in the movie. So I guess you could say Starlord and Spider-Man got their own spin off! But for real tho this has nothing to do with super heroes. I know you know that. Tom is the best, I love him like a little brother. He is so awesome. This movie is going to be your new favorite movie."

Holland also took to Instagram to share the same sentiments alongside the poster. He wrote about Pratt, “@prattprattpratt we are finally big brother little brother. So proud of this movie already and my dreams of being in a Pixar movie are coming true. Can’t wait for your guys to see this one."

More like this
A New Scooby-Doo Movie Confirmed Velma Is Gay & Twitter Is Pumped
By Radhika Menon
Twitter Is Unravelling Over Wolverine’s Return For 'Deadpool 3'
By Darshita Goyal
Everything You Need To Know About The 'Knives Out' Sequel
By Bustle Editors
Everything You Need To Know About ‘Black Panther: Wakanda Forever’
By Bustle Editors
Get Even More From Bustle — Sign Up For The Newsletter