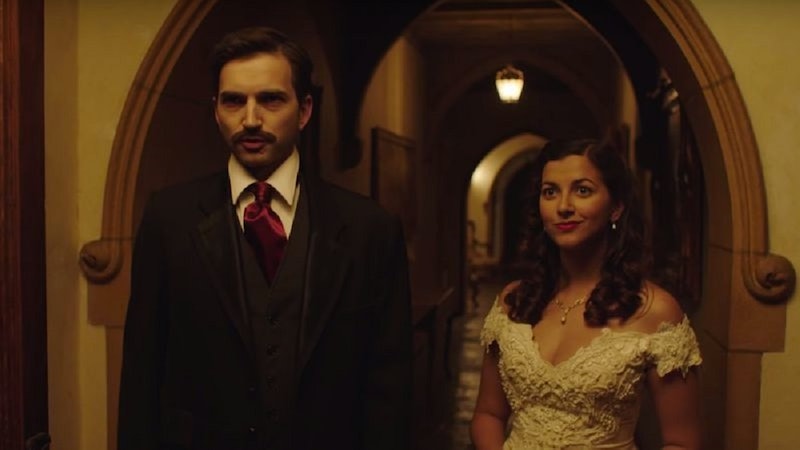 With the autumnal season fast approaching, there is going to be ample time for cozy indoor activities: reading, of course, being the main one. But for those days when you just want to chill and watch some TV, literary web series can be a great alternative. And now's the time to send in your RSVPs, because you are definitely going to want to attend Shipwrecked Comedy's Edgar Allan Poe's Murder Mystery Invite Only Casual Dinner Party/Gala For Friends Potluck (or Poe Party) this fall.

This hilarious, atmospheric, modern gothic take on Poe's dark tales sees the author (and his live-in ghost friend, Lenore) organizing a murder mystery dinner party for some of history's most famous authors...but things don't go quite as planned. Someone in the house starts killing off the authors one by one, and it's up to the remaining guests to try to stop it.

There are tons of familiar faces here; in more ways than one. Not only do world-famous authors Charlotte Bronte, Ernest Hemingway, Oscar Wilde, Mary Shelley and more all have seats at the table, you'll recognize Ashley Clements, Mary Kate Wiles and Jessica Jade Andres from The Lizzie Bennet Diaries; Joey Richter and Lauren Lopez from A Very Potter Musical; and even Jim O'Heir from Parks and Recreation.

It's that jolt of "Hey, I know you!" that will pull you in, but it's the dark comedy that will keep you clicking on to the next episode. Because as accusations among the guests fly, so do the sarcastic retorts, witty quips and general mayhem. From Hemingway's constant conjuring of drinks from his suit pocket to George Eliot's (a.k.a Mary Anne Evans) failed attempts to assure everyone that she is, in fact, a man, you'll see all of the stereotypes and rumors we know about each author played to hilarious effect.

And it's this that makes Poe Party one of the best web series out there for lit-fans; because the writers don't take time to explain why their jokes about Hemingway's proclivity for brevity, or the competition between Charlotte Bronte and Jane Austen, or Oscar Wilde's flair for the dramatic are funny...they just assume that you know. And because of this we get tongue-in-cheek references to the books they wrote and lives they led without any preamble or over-the-top, eye-rolling comedy. This, paired with the actors' finesse makes characters out of the classics in one of the best, and wittiest, takes I've ever seen.

So, not only will you feel like you got to spend some time with the weirdest and most wonderful versions of your favorite authors, you'll definitely want to find out more info about a few of them once you're done...and add a few of those classic books you may have missed on to your TBR.

With only 11 episodes, you can definitely binge watch this all in one afternoon. And the beautifully gloomy cinematography makes it perfect for the coziest of fall evenings, or even as a part of your Halloween festivities (after all there is definitely tons o' murder going on), to get the full effect. You'll laugh, you'll cry with laughter, and you'll be thoroughly sucked in by all of the sinister (and silly) goings-on. If you were looking for your next web series obsession, trust me, this one is it.