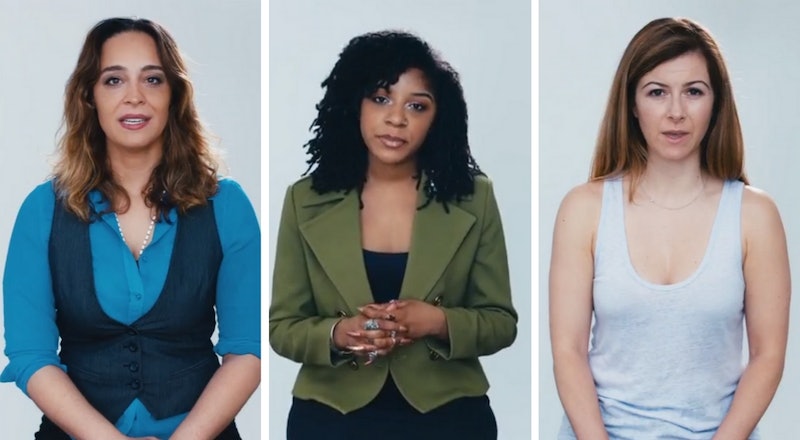 When news broke of Hollywood mogul Harvey Weinstein's decades-long history of alleged sexual misconduct, victims of sexual assault and harassment took to Twitter with the viral hashtag #MeToo to raise awareness about the epidemic and offer support to other survivors. For many, seeing their newsfeeds filled with stories of violence and trauma from their friends, family, neighbors, coworkers, and strangers was shocking. For others, including poet McKayla Robbin whose 2016 collection, we carry the sky, was recently turned into an empowering short film about women's experiences, it was a powerful campaign that brought women together and strengthened a vital conversation about the abuse they face every day.

Directed by actress, producer, and director Elizabeth Masucci, "we carry the sky" is a short film in which a tapestry of diverse women of all different ages, ethnicities, races, body types, and backgrounds read from Robbin's fiercely feminist poetry collection by the same name. The collaboration was released on PBS Newshour and Youtube last Monday, and features nearly a dozen different women delivering some of the collection's most captivating lines with passion, heart, and emotion viewers can feel through their screens.

"Because of the Weinstein allegations and the #MeToo movement, the film seemed particularly poignant and necessary," McKayla Robbin tells Bustle of the project's inspiration and process. "We decided to release it because we wanted to join the conversation surrounding those things."

Published in December of 2016, just two months after footage of then presidential candidate Donald Trump bragging about sexual assault surfaced, we carry the sky is a commanding collection of short-form poems that explore themes of identity, femininity, sexuality, self-love, power, violence, and healing. Though each entry is small, every poem is packed with powerful imagery, vivid emotion, and welcomed womanly wisdom.

Featuring rich lines that are as bold as they are lovely, Robbin's poems seek to inspire, to comfort, to empower, and to engage the reader in a deeper conversation about the most crucial issues facing women today.

"Poetry is having a renaissance in our country right now, in part because of the social/political climate and the accessibility of social media." Robbin explained. "But if you look at the history of poetry, it's an art form that has always been the chosen art of the oppressed. Poetry gives us a way to name the emotions and experiences that are most difficult or painful to name. Naming something gives us immense power — it gives us the power to tell our own stories. When we can tell our own stories, when we can tell the stories of our lives instead of depending on someone else to tell our stories for us — we reclaim our own agency."

Robbin chose to write her poetry in short form in the hopes of reaching a wider audience who wouldn't otherwise pick up a traditional collection, and her burst of inspiration do just that. In one poem, she insists we must unlearn our own internal misogyny. "sorry to be a woman, / eve learned to say," she laments, "and / now we have to / unteach her apology / from our / mouths". In another — "her mouth is a graveyard / full / of all the words / fear / has drowned" — she addresses the constant state of terror most women live their lives in.

"When we can tell our own stories, when we can tell the stories of our lives instead of depending on someone else to tell our stories for us — we reclaim our own agency."

Filled with an endless amount of quotable lines that would make perfect signs for the next feminist march, we carry the sky only becomes more empowering when it is brought to life in Robbin and Masucci's short. Simple in design and powerful in execution, its tightly-cropped shots of a rainbow of beautiful and inspiring women reading some of Robbin's most beautiful and bad-ass lines is enough to give any viewer chills.

In speaking about the short, Robbin expressed her desire for for the film to serve as an empowering tool for women who have experienced harassment and sexual assault. “What I most hope is that it helps women feel less alone, helps women feel like their story is important, like they matter as humans and are supported members of a community," Robbin said. "With the short film, Liz (and of course the actresses in the film) bring the poems to life — the women in this film are inter-generational; they come from different religious and ethnic backgrounds and different sexual orientations; they represent a wide diversity of women. We wanted the film to be a reflection of intersectional feminism."

And that is exactly what the five minute short is.

Like the viral #MeToo campaign, we carry the sky, both the poetry collection and the recent short video, are brave acts of honesty and openness that seek to unearth the truth about rape culture in the United States, spread awareness about the prevalence of sexual violence against women in America, and inspire women around the world to speak their truths and fight for the justice they deserve.

"We need to believe women's stories when they are shared. We need women to write and produce and direct and run for office, and we need men (and women) in positions of power to lift up our voices. To say 'I believe you,' " Robbin explained. "We need to stop depending on the patriarchal system to write feminist narratives — we need to write our own."

More like this
Women Around The World Are Cutting Their Hair In Solidarity With Mahsa Amini
By Darshita Goyal
The Most Anticipated Books Of October 2022
By K.W. Colyard
10 New Must-Read Books Out This Week
By K.W. Colyard
What Is A "Hot Girl Book" & Why Is Everyone Talking About Them?
By Samantha Leach
Get Even More From Bustle — Sign Up For The Newsletter