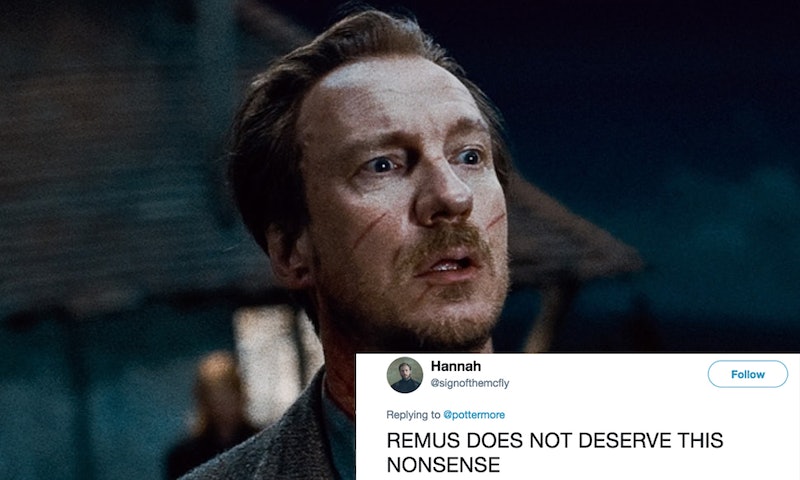 Pottermore inadvertently insulted Remus Lupin on Twitter, and Harry Potter fans are UPSET, because if there's one character in all of Harry Potter who does not deserve to be criticized, it's Remus Lupin.

Pottermore's tweet alleged that there was no real difference between any of Harry's Defense Against the Dark Arts professors, except for Dolores Umbridge, who — sorry, Voldy — is the true embodiment of evil in the Harry Potter franchise. The post overlooked that fact that there is a wizarding world of difference between the six other DADA professors, who could easily be placed on a spectrum of badness.

Let's review. Harry's first DADA professor, Quirinus Quirrell, tracked down Voldemort in pursuit of recognition — as He Who Found He Who Must Not Be Named, presumably — only to be possessed by the Dark Lord. Gilderoy Lockhart was a lying sham of a wizard who might as well have been a squib. Barty Crouch, Jr. was a murderous, Unforgivable Curse-teaching Death Eater who kidnapped Alastor Moody and used Polyjuice Potion to impersonate him. Dolores Umbridge was probably some sort of cat-loving frog demon, if we're being honest, and Severus Snape was a bitter incel who took his anger at James Potter out on an innocent little boy. Then there's Amycus Carrow, who changed the course to "Dark Arts" and enjoyed torturing his students.

And then there was Remus John Lupin, Order of Merlin, First Class. By far the sweetest of the Marauders, Lupin had every reason to turn into a bitter old man like Snape. He was an outcast who had to keep his disability a secret from his students. He mourned the death of Sirius Black — his best friend, and, if you ship it like I do, his lover — and fell hard into the arms of Nymphadora Tonks, only to feel conflicted and afraid when he realized that building a family with her would mean putting his wife and child at risk. And then he and Tonks died at the Battle of Hogwarts, leaving the wizarding world with one more legacy orphan to raise.

To be clear, J.K. Rowling's treatment of lycanthropy in the Harry Potter franchise is hella problematic. Using HIV/AIDS — which is still thought of today as a "gay person's disease" — as a model for lycanthropy, and then having that lycanthropy spread by attacks from a pedophilic werewolf, conflates gayness and pedophilia in really gross way, one that has been used historically to vilify the LGBTQIAP+ community. But just because Rowling made Lupin's "furry little problem" into something of a homophobic mess does not mean that Lupin himself was problematic as a character, something Twitter users came out in droves to remind Pottermore of.

R.I.P. Remus. You did not deserve this.

More like this
10 Must-Read New Books Out This Week
By K.W. Colyard
10 Must-Read Books Out This Week
By K.W. Colyard
Harry Potter's Viktor Krum Has Undergone A Huge Transformation Since Hogwarts
By Sam Ramsden and Meguire Hennes
Nicola Coughlan Shared A Lady Whistledown Excerpt From ‘Bridgerton’ Season 3
By Grace Wehniainen, Alyssa Lapid and Sam Ramsden
Get Even More From Bustle — Sign Up For The Newsletter