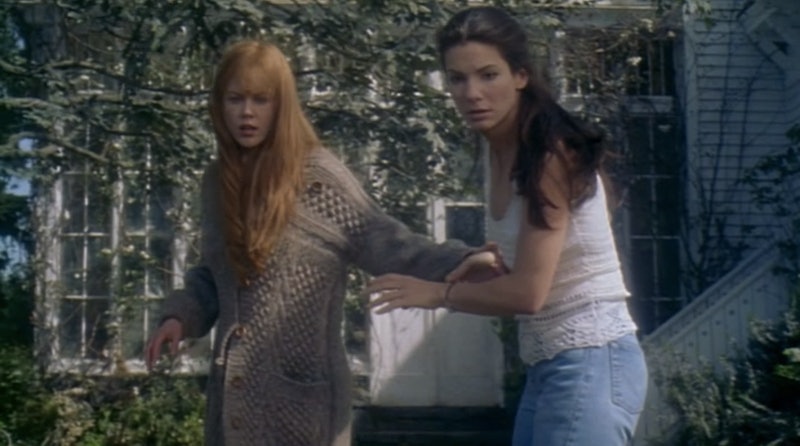 Back when it was first released, if you would've said Nicole Kidman and Sandra Bullock's 1998 film Practical Magic would be considered a cult-classic today, no one involved, not even director Griffin Dunne, probably would've believed you. According to Dunne's recent Vulture interview, Practical Magic was cursed by a real witch, leading him to believe that its label of "a flop" in the '90s came as a result. That's right — "a flop." And its Rotten Tomatoes score of 20 percent from some of the industry's top critics make the now-phenomenon seem so unexpectedly brilliant.

In the interview with Vulture, Dunne, an original skeptic of anything magical or witch-related, explained that after bringing a witch consultant onto the production, what was once a story about strong, yet complicated female leads quickly turned into an unforeseen disaster. The consultant was helpful to Dunne in developing a film that was more about a holistic legacy than spell books and potions. But once the consultant reportedly felt as if she wasn't going to be credited in the production properly, the tables quickly turned. Dunne told Vulture,

And in dropping his voice into a growl, according to Vulture, Dunne claimed that the consultant yelled: "How dare you sic that shrew on me? You think you can buy me off, well let me tell you something? There is a land of curses!" He also said she slipped into tongues during the eerie voicemail, which he deemed "terrifying." Apparently, then the consultant decided to sue Warner Bros. Not only that, but according to Dunne, this spell seemingly left a bad taste in the mouths of the critics who reviewed the film. He added,

"Nonetheless, when we’d screen it, people were jumping out of their seats and laughing. Women and girls in particular were all so moved by it, and it did very well at the box office. But despite that, it had a weird reputation for being a failure. So I don’t give the curse any power, but at the same time, I did come to think that somehow a little stink was put on the movie."

The "stink" Dunne speaks of did eventually go away, as the film is considered a fan-favorite today. But initially, some harsh reviews included "part comedy, part family drama, part romance, part special-effects mystery-adventure, and not entirely satisfying on any of these levels," via Variety, and "a witch comedy so slapdash, plodding, and muddled it seems to have had a hex put on it," via Entertainment Weekly.

So, maybe that means that the consultant's spell, if actually casted, was only meant to withstand for a certain amount of time? Perhaps, but in the moment, Dunne wasn't going to take his chances. The director reportedly hired someone who could reverse the supposed spell right away — or an exorcism, if you will.

Practical Magic was the last major motion picture that Dunne ever directed, and he had a hard time getting any of his projects off the ground in the industry, as well. If that was the witch consultant's aim, it may be safe to say that the spell had its negative effects, but there was also some good that came out on the other end. Dunne got to see how much of impact the Halloween classic had on its female fans — helping to foster a sense of feminism and sisterhood. One person's trash is certainly another man's treasure.