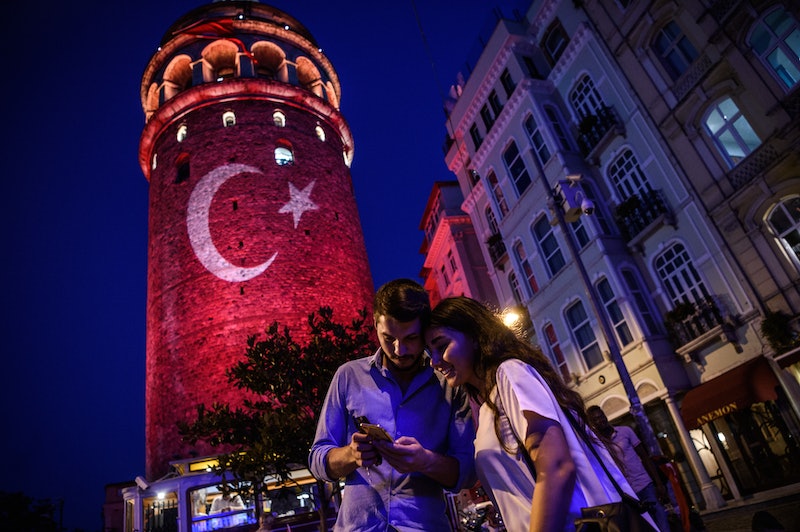 Hopes for a more peaceful new year were dashed when a gunman killed at least 35 people in an attack on a popular Istanbul nightclub shortly after midnight on Sunday. In the wake of the attack, many took to social media to share their distress, outrage, sympathy, and support for Turkey's largest city. As "Pray For Istanbul" tributes and memes began to trend on Twitter it became clear just how weary many people have become with the recent surge of violent attacks happening around the world.

At least one gunman dressed in a Santa Claus suit fired on revelers ringing in the new year at Reina, a trendy nightclub in Istanbul's Ortaköy neighborhood, in what the city's governor has called a "terror attack." Initial reports claim at least 35 people have been killed with dozens more injured. An estimated 600 people were believed to have been in the nightclub at the time of the attack.

Although an investigation into the incident is ongoing and many details remain unclear, the deadly attack came as a serious blow to those who had hoped to leave the surge of violent attacks seen in 2016 behind when the clock struck midnight. Under the hashtag #PrayForIstanbul, many social media users called for an end to allowing such violence to continue.

For those weary of the "Pray For" trend that got started in 2016, the shooting at Istanbul's Reina nightclub was a distressing way to welcome 2017.

Is There A Skip Button On This Thing?

More than a few people were into the idea of simply skipping ahead to 2018. I can't say I blame them if Sunday morning's attack is any indication of how the rest of the year might play out.

Just To Say, I Love You

Many who know and love Istanbul took to Twitter to express their sympathy and support for those affected by Sunday morning's attack.

Some social media users took to Twitter to share illustrated tributes to Istanbul as a means of showing their support.

In the wake of another violent attack, some Twitter users called for adding love and understanding to lists of New Year's resolution.

While "Pray For" tributes and tweets may be great for sharing your support for those affected by violence around the world, Sunday's attack in Istanbul is clear evidence that we need action more than we need Twitter hashtags.