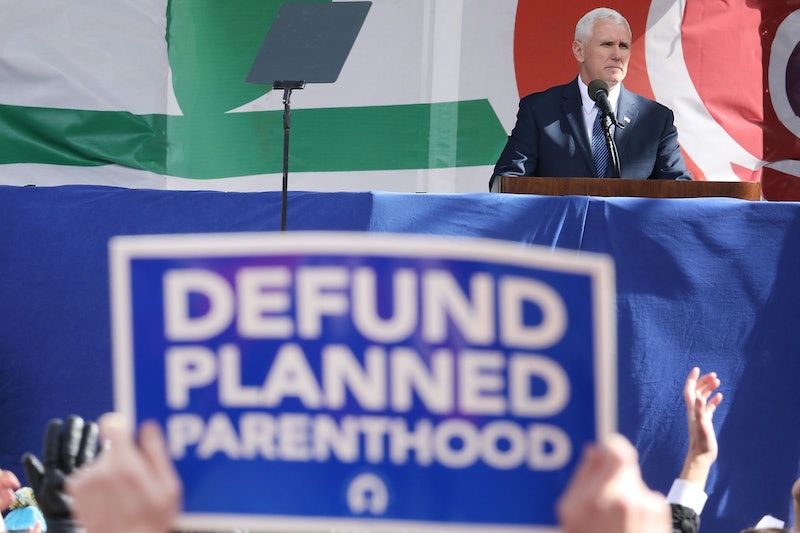 Although he only recently passed his 100th day in office, calls for Trump's impeachment have already started — and they're growing louder by the day. In a speech on the floor of the House of Representatives, Texas Rep. Al Green called for impeachment proceedings, accusing the president of obstruction of justice due to his decision to fire FBI director James Comey, who was investigating Trump's campaign for potential ties to Russia. On Tuesday, The New York Times reported that, according to a memo written by Comey, Trump asked him not to investigate Michael Flynn, Trump's former national security adviser. In the last 24 hours, the conversations about potential impeachment have only intensified.

None of this means that a Trump impeachment is even particularly likely. However, if Trump does leave office — either via impeachment or resignation — it is important to remember that the policies he and his administration have tried to advance may likely continue. With a bicameral GOP majority at least until 2018, for example, the American Health Care Act may still be on its way to becoming law.

Most importantly, Trump's potential successor would be Vice President Mike Pence, whose stated opinions on social issues are, in some cases, even more conservative than Trump's. The battle for women's reproductive rights, for example, may even intensify if Pence were to take office.

Given Pence's previous record on women's health issues, the fight to save funding for Planned Parenthood and to protect a woman's right to choose may get even harder under a Pence presidency.

Trump's policies have already set in motion damage to the health of women worldwide — and those who think his potential impeachment would undo that are almost certainly wrong.

Trump has formerly identified himself as pro-choice, but Pence has a long history of being committed to impeding abortion access nationwide. Unlike Trump, Pence worked in politics for decades before taking on his White House role. During that time, he established himself as one of the country's staunchest opponents of reproductive rights.

"Mike Pence has an alarming history of restricting a woman's right to basic health care services," Amanda Allen, Senior State Legislative Counsel at the Center for Reproductive Rights, tells Bustle. "From signing extreme abortion restrictions while governor of Indiana to issuing a tie-breaking vote in the Senate to rescind a rule protecting health care for patients who rely on federal funding for family planning services, it's clear Pence poses a dangerous threat to American women and their rights."

Before being nominated as Trump's vice presidential candidate, Pence was governor of Indiana, where he attracted national attention for a restrictive abortion law that was eventually stricken down by courts. The law required miscarried or aborted fetuses to be buried or cremated, forced abortion patients to look at an ultrasound and listen to the heartbeat, and banned abortions sought because the fetus had abnormalities. He also inspired the famous "Periods for Pence" campaign, in which activists sarcastically called Pence's office to report that they were menstruating, in case they had miscarried without their knowledge.

"By his own admission, Pence refuses to dine alone with any woman other than his wife, which could certainly complicate visits with heads of state like Theresa May and Angela Merkel."

Then, there's what HuffPost's Erin Schumaker called Pence's "defining moment" as governor: the HIV outbreak that seized the southern part of the state while he was in office. In her report, Schumaker attributed the outbreak, in part, to Pence's attacks on Planned Parenthood, where patients could be tested for HIV and acquire condoms. Under Pence, one of Indiana's southern counties, Scott County, lost its only Planned Parenthood clinic — the only HIV testing facility in the county.

Moreover, as vice president, Pence cast the tie-breaking Senate vote on a bill intended to enable states to defund Planned Parenthood and similar organizations. Federal funding already doesn't cover abortions, so what such a bill would have actually done is strip women on Medicaid of coverage for contraception and other necessary medical treatment.

Being anti-choice is not the only way in which Mike Pence is a vehement social conservative. He once said that same-sex marriage would cause "societal collapse" and called the children's film Mulan "mischievous liberal propaganda" about the possibility of women in combat. And, by his own admission, Pence refuses to dine alone with any woman other than his wife, which could certainly complicate visits with government leaders like Theresa May and Angela Merkel.

In many ways, then, his ascension to the presidency would continue the endangerment of abortion access that began under Trump. Last October, when many Republicans pledged to write in Pence's name after Trump's Access Hollywood tape leaked, Planned Parenthood President Cecile Richards said of these GOP leaders, "They are switching from a man who condones sexual assault to Mike Pence, a man who made his career crusading against women, including trying to redefine rape and criminalize abortion, and leading the Republican party’s charge to defund Planned Parenthood."

While some Democrats might initially rejoice at the prospect of a Trump impeachment, they shouldn't assume that the change would make the battle for women's health any easier.