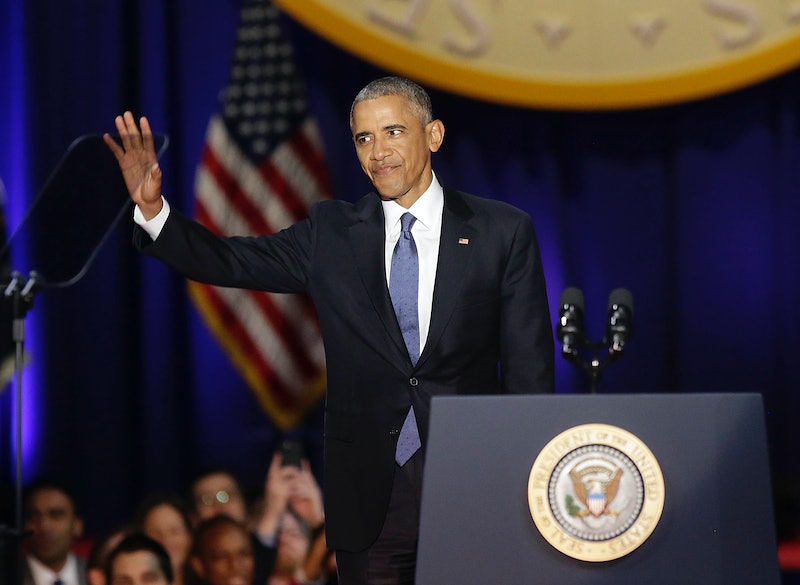 During his final address to the nation as Commander in Chief, President Obama made an important and meaningful reference that ended up being one of the highlights of his speech. No, it wasn't about Donald Trump, but a much more likable, and in some ways more relevant, character. President Obama gave Atticus Finch his good name back and naturally, literature fans on Twitter were overjoyed.

Though his daughter Scout is the narrator of the book, Finch is and always has been the hero of the beloved Southern novel To Kill A Mockingbird. But the lawyer and stoic civil rights supporter was infamously maligned in the 1960 book's sequel, Go Set A Watchman, published 55 years after its predecessor. Once a symbol of racial justice and the importance of white allies, author Harper Lee's second book recast Finch as a racist who had attended Ku Klux Klan meetings and supported segregation. The sequel was allegedly published without the express permission of the author and was reportedly a first draft of To Kill A Mockingbird that Lee never intended to release, but the damage to Finch's character appeared done. The country was begrudgingly forced to accept a new facet of Finch's character that certainly added a level of context and veracity, but never sat right for many of the die-hard Finch fans who had fallen in love with the book over the decades.

But Tuesday night in Chicago, President Obama decided to conclusively weigh in on Finch's legacy, while at the same time reinforcing his own. Obama dropped one of Finch's most famous and influential quotes from the original book as part of his plea to the American people to reach a deeper understanding of one another: "You never really understand a person until you consider things from his point of view, until you climb until his skin and walk around in it." With that, Obama pretty unquestionably restored Finch's standing as a racial justice advocate, to the relief of millions of fans from across the political spectrum.

Finch's character is a reminder that there are still things Americans can come together on, and the incredible thing is that he's an active combatant against racism and institutionalized discrimination.

Like the rest of Obama's speech, the reference to Finch and the reaction it received online gives hope that a more racially just America is within reach. To achieve that, all Americans must be brave enough to challenge difficult social norms and institutions, just like Finch does in To Kill A Mockingbird.