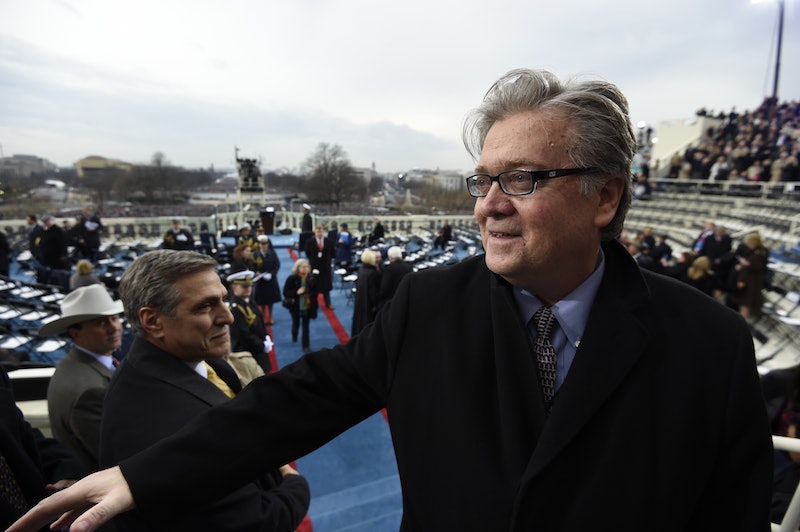 Donald Trump was sworn in as the 45th president of the United States a little more than a week ago, and yet a trending Twitter hashtag is stirring up questions about who's really running the country. Less than a day after Trump added his chief strategist to his National Security Council — an action that signaled Steve Bannon's influence in the White House was quickly extending far beyond politics — many on Twitter began questioning Bannon's power with the hashtag #StopPresidentBannon.

Trump signed a memorandum Saturday giving Chief Strategist and Senior Counselor to the President Bannon and White House Chief of Staff Reince Priebus permanent positions on his National Security Council in a highly unusual reorganization that also removed the Director of National Intelligence and the Chairman of the Joint Chiefs of Staff as principal members. Political operatives like Bannon and Priebus are not traditionally (or even normally) given such positions. According to The Washington Post, Trump said he thought the reorganization would add "a lot of efficiency and, I think, a lot of additional safety."

However, the notion that seasoned intelligence and military leaders were being pushed aside for a man with ties to Breitbart News and the alt-right, a movement that embraces white nationalism, racism, and anti-Semitism, didn't sit well with many on social media. Under the hashtag #StopPresidentBannon, some Twitter users attributed Trump's recent executive order on immigration to Bannon's growing power and influence. Others questioned who was really in power, implying Trump was Bannon's puppet.

There were those in vocal opposition to Bannon:

There were those questioning how much power Trump yields:

There were those calling Bannon the puppet master

There were those protesting Bannon's ties to the alt-right:

There were those feeling a bit sympathetic for Trump:

There were those wondering about the reasoning behind it all:

There were those who felt the fact spoke for themselves:

There were those for which the news came as no surprise:

Former Secretary of Defense Robert Gates called the removal of the director of National Intelligence and the Chairman of the Joint Chiefs of Staff out of meetings "a big mistake," in an interview with ABC News. "I think that they both bring a perspective and judgment and experience to bear that every president, whether they like it or not, finds useful."

White House Press Secretary Sean Spicer told ABC News Trump's reorganization was an effort to "modernize the National Security Council so that it is less bureaucratic and more focused on providing the president with the intelligence he needs."

While it's hard to see how removing the director of national intelligence and the chairman of the Joint Chiefs of Staff will enable the president to have "the intelligence he needs," Bannon's growing influence in matters of foreign policy and national security are hardly surprising. Was it not a large enough red flag when Trump appointed the head of Breitbart Media as his chief strategist?