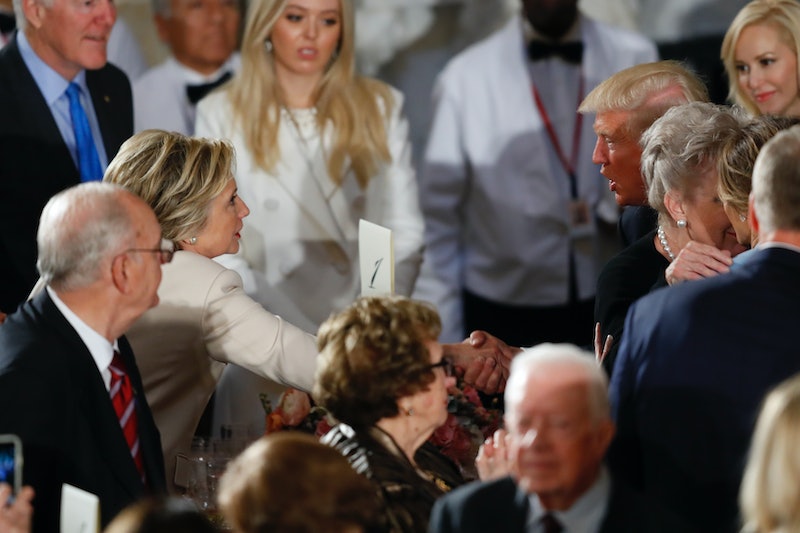 At the inaugural lunch on Friday afternoon, President Trump asked Hillary Clinton to stand up, saying he was honored that she attended the event and that he "has a lot of respect" for her and her husband. Clinton obliged, and the crowd gave her a standing ovation.

"And honestly," the president continued, "there's nothing more I can say, because I have a lot of respect for those two people."

In normal circumstances, there would be nothing strange about a newly-inaugurated president asking a room to show some respect to their former opponent. But these are not normal circumstances: During the campaign, Trump pledged to throw Clinton in prison, and his fevered supporters chanted "lock her up!" at his nominating convention.

It was a shockingly hostile and retaliatory piece of campaign rhetoric, and whether or not Trump would follow through with it was an open question after he won the election.

However, Trump said after election day that he wouldn't actually be pursuing any investigations into Clinton once taking office. Though time will tell whether or not this is true, Trump's tribute to Clinton at the inaugural lunch today suggests that he won't pursue any retribution against his former opponent. If that's the case, it will be welcome news to anyone who doesn't want to see America go down the same route Ukraine took several years ago, when the new president imprisoned the last president after narrowly winning election.

Amusingly, some of Trump's supporters are now upset at him for reneging on this, and are insisting that he uphold his pledge to put the former secretary of state in prison on unspecified charges.

The deplorables' objections notwithstanding, it's a relief to see signs that Trump isn't actually going to try and imprison Clinton. The peaceful transition of power is a cornerstone of democracy, and so is the notion of being able to run for office without getting thrown in jail if you lose. There is still plenty to fear in Trump's presidency, but seeing him pay tribute to Clinton on his first day in office is certainly a positive development.