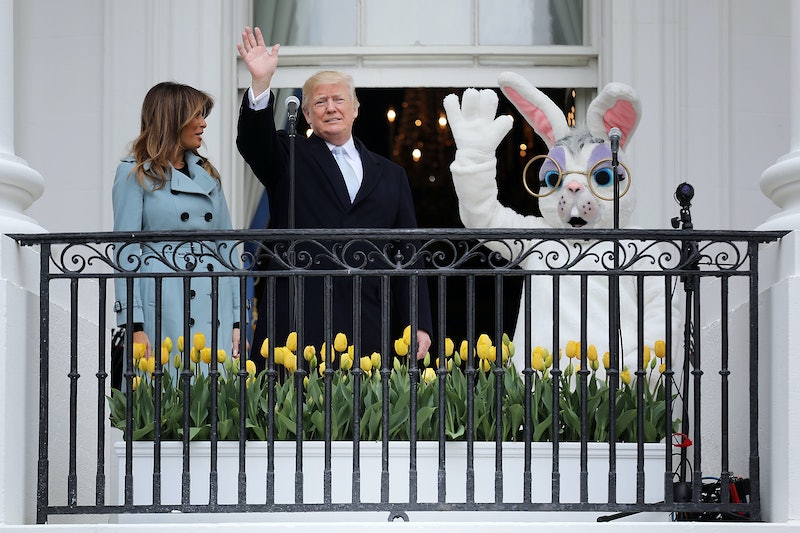 On Sunday, millions of people around the world celebrated Easter, including the President of the United States. On Twitter, President Trump's Easter message praised the U.S. economy and the strength of the country. Shortly thereafter, the president doubled down on his criticism of the Mueller report and its associated investigation.

"Happy Easter!" Trump tweeted early Sunday morning. "I have never been happier or more content because your Country is doing so well, with an Economy that is the talk of the World and may be stronger than it has ever been before. Have a great day!"

The president also expressed condolences for the more than 200 people who died in Sri Lanka, as part of what authorities have called a coordinated bombing attack on three separate churches during Easter services, according to The New York Times. "The United States offers heartfelt condolences to the great people of Sri Lanka," Trump tweeted. "We stand ready to help!"

But the president's tweeting changed course as the morning wore on. Instead of focusing on Easter, itself, it appeared that Trump's attention reverted to the Mueller report and the Special Counsel's investigation into whether the 2016 Trump campaign colluded with Russia to influence the presidential election, as well as questions of obstruction of justice (the report found no evidence to support criminal wrongdoing).

"The Trump Haters and Angry Democrats who wrote the Mueller Report were devastated by the No Collusion finding!" Trump tweeted Sunday morning. "Nothing but a total 'hit job' which should never have been allowed to start in the first place!"

That tweet was the first in a string of messages related to the report tht the president sent out over the course of the morning. In one message, he suggested that because of the Special Counsel investigation, Democrats will suffer during the upcoming 2020 presidential election, wherein Democratic candidates will do their best to prevent Trump from serving for a second term.

"Despite No Collusion, No Obstruction, The Radical Left Democrats do not want to go on to Legislate for the good of the people, but only to Investigate and waste time," Trump tweeted. "This is costing our Country greatly, and will cost the Dems big time in 2020!"

As the president has done many times over, he described the report and the investigation as an attempt to undercut his authority and position as president. He pointed to the fact that the Mueller report did not determine that there was any collusion between his 2016 presidential campaign and Russia. (Trump has not been charged with any crimes associated with the investigation.)

"Can you believe that I had to go through the worst and most corrupt political Witch Hunt in the history of the United States (No Collusion) when it was the 'other side' that illegally created the diversionary & criminal event and even spied on my campaign?" the president tweeted late Easter morning. "Disgraceful!"

After tweeting several times over the course of the morning, ABC News reports that the president attended an Easter morning church service.