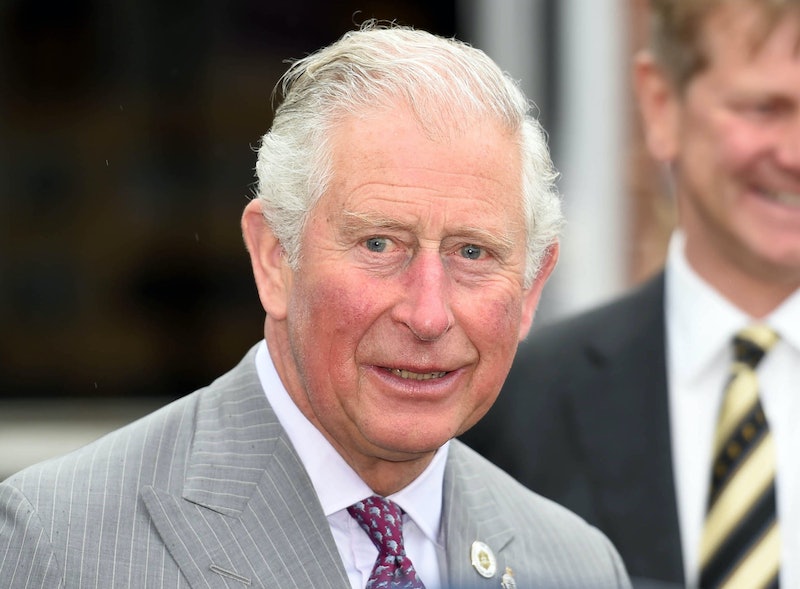 The new royal nugget has finally arrived, and needless to say, people are pretty pumped. It's no surprise then that Prince Charles' reaction to Prince Harry and Meghan Markle's baby proves that he's definitely as pumped as the rest of us are — OK, probably more so — and he's absolutely over the moon about being a grandfather yet again.

In a statement via Clarence House's official Twitter handle on May 7, the Prince of Wales and Duchess of Cornwall (aka Prince Charles and Camilla Parker Bowles) announced,

"We couldn’t be more delighted at the news and we’re looking forward to meeting the baby when we return."

It's worth noting that they said they're "looking forward to meeting" their grandson — as in, they still haven't met the little guy. According to People, Charles and Camilla were, in fact, in town when Meghan gave birth, but left the following day for a three-day tour in Germany.

Don't worry, though. It doesn't seem like the delay in meeting Baby Sussex was a snub from either party— Prince William and Kate Middleton haven't met him yet either. In a video on Twitter from The Sun's Royal Correspondent Emily Andrews, William said that he and Kate were "absolutely thrilled [about the newborn] & look forward to seeing [Harry and Meghan] in the next few days."

William then added a bit of cheek to his response, telling the press that he's "very pleased and glad to welcome my brother to the sleep deprivation society that is parenting!" Ah, yes. The Sleep Deprivation Society. If you've got kids, perhaps you've heard of it? Membership not limited to the royal family.

Fortunately for Charles and Camilla, their membership to that society has since expired, and now, they're free to simply revel in the many joys of being grandparents. And Camilla, especially, appears to be all for it.

"[Being a grandparent is] very nice because you haven’t got the full responsibility," she said in the documentary The Real Camilla: HRH The Duchess of Cornwall (as per People). "You can give them a wonderful time, spoil them, give them all the things their parents won’t allow them to have and then give them back again."

Charles seems to be quite happy about being a grandfather as well, and is apparently *really* good at it, according to Camilla. In speaking about him during the BBC's 2018 documentary, Prince, Son & Heir: Charles at 70, according to E! News, the Duchess of Cornwall revealed, "He reads Harry Potter and he can do all the different voices and I think children really appreciate that. He will get down on his knees and crawl about with them for hours, you know, making funny noises and laughing."

Um, OK, how cute is that? Can someone please see if there's a recording out there of Charles reading Harry Potter to his grandkids and like, going between Harry and Hagrid's voices? Better yet, can someone just convince him to do an entire audiobook? Looking at you, Harry, Meghan, and yet-to-be named Baby Sussex.