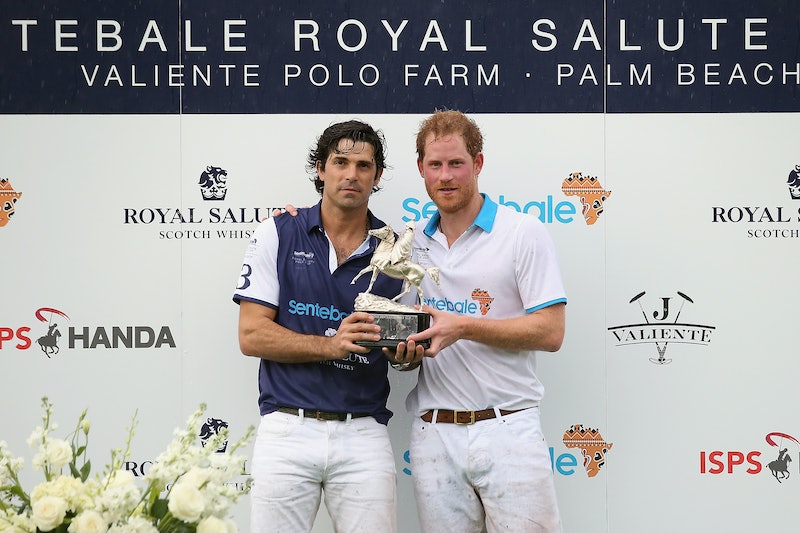 Prince Harry's best friend, polo player Ignacio "Nacho" Figueras, isn't here for his royal pal being dad-shamed. During a conversation with reporters in Rome, Prince Harry's pal defended him for leaving Archie, and Figueras made some great points about parenthood and judgment.

As Cosmopolitan reported, Prince Harry was in Rome with Figueras for the 2019 Sentebale ISPS Handa Polo Cup on Friday. And according to the magazine, it was his first time away from his son since baby Archie was born on May 6. Considering it was a charity event, though, that's a pretty good reason to leave home for a day — and Prince Harry's pal emphasized that fact when asked about the royal leaving his newborn so soon.

"I am a father of four, and sometimes duty calls. This is 24 hours away from the house, I think he's doing just fine," Figueras said of his friend Prince Harry in a video posted to a fan account on Instagram. "He's a wonderful father. I'm very impressed, and he's here for an amazing cause."

It's not clear from the video which outlet had asked Figueras about the Duke of Sussex leaving his son at home, but the polo player wasn't here for the question's implications. Prince Harry is clearly delighted to be a dad, and he's super devoted to Meghan Markle and baby Archie. But he's also still a member of the royal family, which means he has to attend charity events and other outings, too. And that certainly doesn't make him a bad father.

Figueras also shared a loving tribute to his royal pal over the weekend, writing a lengthy caption about what a "kind, generous, compassionate person" Harry is. The polo player wrote on Instagram,

"The world thinks they know everything about this man. I have been fortunate enough to spend enough time over the years to learn and understand the man he really is, a kind, generous, compassionate person who is constantly thinking about how to make the world a better place, wether [sic] that is helping kids in Africa, talking openly about mental health, encouraging children or talking about climate change and the things that we all human beings need to change for the next generations."

This is far from the first time Figueras has praised Prince Harry and Meghan Markle's charitable work. In an Instagram post he shared last July, Figueras wrote that the couple "both found each other to change the world."

"This girl really rocks," Figueras wrote of Markle on July 27, sharing a photo of the three of them together. "The more I know you the more I am convinced that you both found each other to change the world. Let's push the envelope!! Let's make the world a better place."

The polo player seems to be all about positivity, especially when it comes to his royal pals. And his latest statement about Prince Harry and baby Archie should make others think twice before commenting on the royals' — or any new parents' — actions.