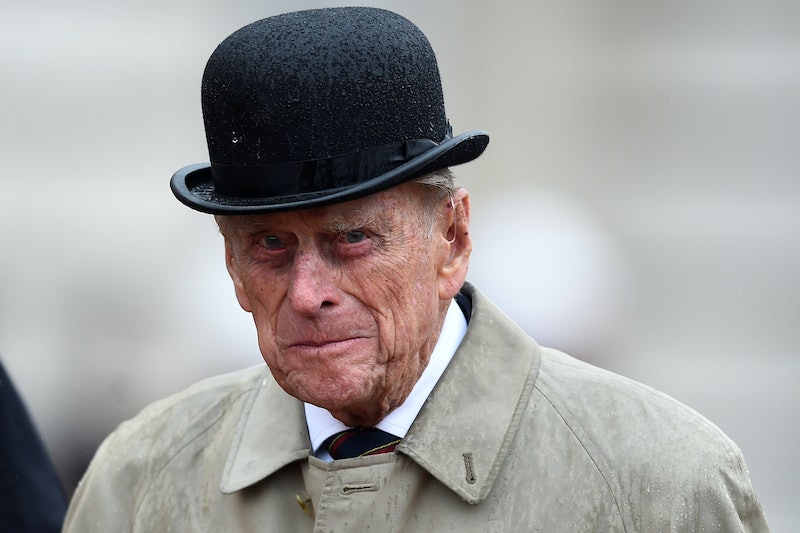 Up until recently, very few people had laid eyes on the new royal baby — including most members of his family. However, on May 8, Prince Harry and Meghan Markle had their official public photo call with their days-old son, and revealed that the first royal to meet Baby Sussex was Prince Philip, according to Cosmopolitan. The funny thing is, though, Philip's introduction to his great-grandson happened totally by accident, but the way it went down was actually super sweet.

Meghan gave birth to her and Harry's son in the early morning hours of May 6. While many of the royal family members have voiced their excitement about the new baby — including Prince William and Kate Middleton, and Prince Charles and Camilla Parker Bowles — their statements also made it clear that they still hadn't met the little guy yet.

During the family-of-three's photo call with the press on Wednesday morning, though, royal reporter Omid Scobie disclosed the happy accident that led to Philip being the first royal to meet Baby Sussex — even before the Queen. At the time, Scobie tweeted that, "The Queen is meeting Baby Sussex shortly but Prince Philip was actually the first member of the royal family to meet him!"

So, how and why did that end up happening, you wonder? "We just bumped into the Duke as we were walking by, it was just so nice," Meghan revealed to the press, as per Scobie's tweet. "It will be a nice moment to introduce the baby to the whole family." (Just to clarify, Prince Philip is also known as "the Duke." His full title is Prince Philip, Duke of Edinburgh.)

Now, the photo call was held in St. George's Hall in Windsor Castle. Philip and the Queen were, in fact, set to meet the new baby there later on in the day, but for whatever reason, Philip bumped into them first.

Isn't it funny to imagine Philip just like, strolling around, killing time before the formal introduction, and then as he like, turns a corner or whatever — surprise! — there's Harry, Meghan, and the baby on their way to meet the press. It kind of creates a funny and endearing mental image, right?

Anyway, the Queen did end up meeting her new great-grandson shortly after the photo call, and Philip and Meghan's mom, Doria Ragland, were there as well. "The Queen and The Duke of Edinburgh were introduced to the newborn son of The Duke & Duchess of Sussex at Windsor Castle," the Royal Family's official Twitter account announced. "Ms Doria Ragland was also present."

Oh, and in that same tweet, they *also* announced the little guy's name! "The Duke & Duchess of Sussex are delighted to announce that they have named their son Archie Harrison Mountbatten-Windsor," the post read.

Do you think Harry and Meghan told Philip their son's name when they bumped into him before meeting the press? Like, "This is Archie, but 'Shh!' don't tell the Queen yet!" Oh, to be a fly on the wall in St. George's Hall.