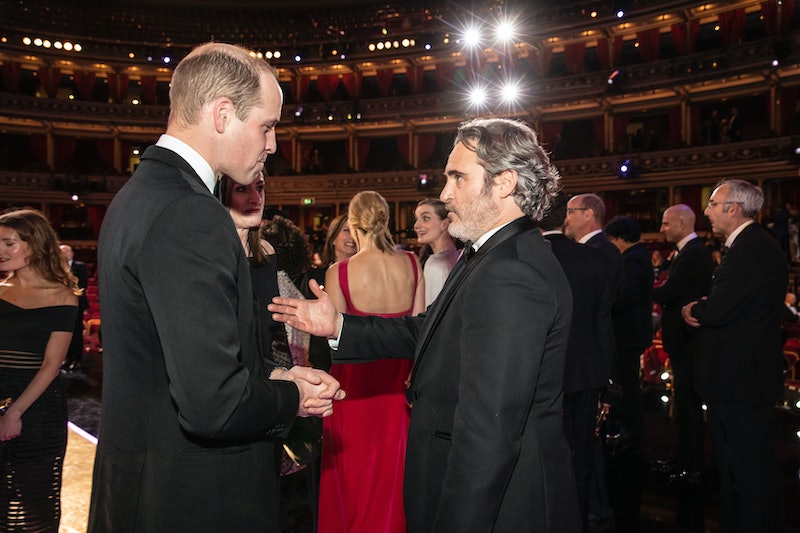 The very best from the world of film were once again at the forefront of the British Academy Film Awards on Sunday (Feb. 2). However, between all the glitz and glam, the 73rd annual ceremony harboured some deeper messages, much of which centred around criticism of this year's nominations — and during two of the most poignant speeches of the night, Prince William and Joaquin Phoenix spoke about lack of diversity at the BAFTAs.

The Duke of Cambridge has been President of BAFTA since 2010, and during his appearance at the 2020 ceremony, the prince praised the "incredible film makers, actors, producers, directors and technicians — men and women from all backgrounds and ethnicities enriching our lives through film." However, as the Mirror reports, the Duke went on to to discuss how there is still a great deal of work left to be done to "ensure diversity in the sector and in the awards process." Prince William later explained that both Pippa, Chair of BAFTA, and Amanda, BAFTA CEO share the same frustrations, and ensured that BAFTA will "continue to work tirelessly to ensure that creative talent is discovered and supported."

The Duke of Cambridge then concluded, "BAFTA take this issue seriously, and following this year’s nominations, have launched a full and thorough review of the entire Awards process to build on their existing work and ensure that opportunities are available to everyone."

Prince William wasn't the only speaker to address the issue, and as Vanity Fair reports, Joker star Joaquin Phoenix shared a similar sentiment during his acceptance speech for Leading Actor. Phoenix began by thanking the British Academy of Film and Television Arts for being "very supportive" of his career, for which he is "deeply appreciative" — however, the actor also explained how he felt "conflicted" because "so many of my fellow actors that are deserving don’t have that same privilege."

Speaking at the ceremony, Phoenix added, "I think that we send a very clear message to people of colour that you’re not welcome here. I think that’s the message that we’re sending to people that have contributed so much to our medium and our industry and in ways that we benefit from."

Wrapping up his time on stage, the Lead Actor winner also touched upon systemic racism within the industry, before concluding, "I think that it is the obligation of the people that have created and perpetuate and benefit from a system of oppression to be the ones that dismantle it, so that’s on us."