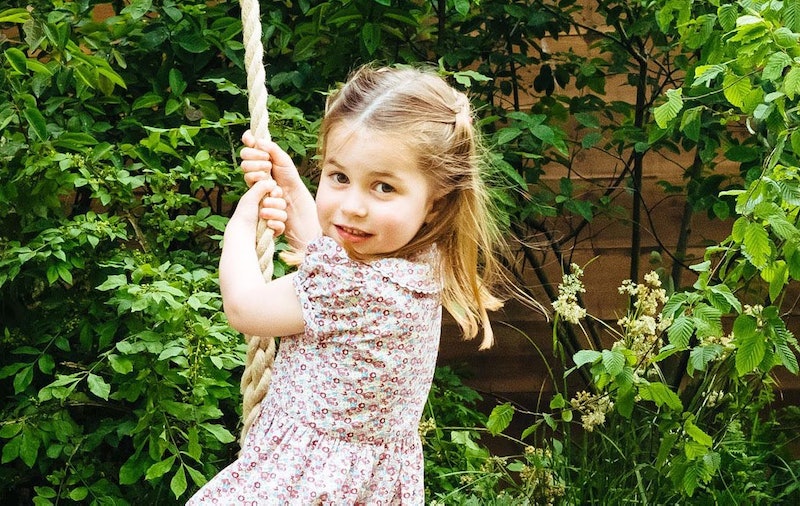 The royal family have had a pretty incredible spring so far, with the birth of Archie Harrison, the launch of a mental health text line, Shout, and the Duchess of Cambridge's new garden for Chelsea Flower Show. They're really living their best life. Prince William and Kate's children visited the garden before its public opening on May 19, and they took the most adorable snaps, letting us see a glimpse of their family life. And videos of the day even revealed Prince William's adorable nickname for Princess Charlotte, which I am low-key obsessed with.

In a video released on the Kensington Palace Twitter page, Prince William asks Prince George to rank Kate's new garden out of ten, to which he replies "20." Pretty cute, huh? Then Prince William says "Mignonette?" to which Charlotte replies "Yes." So it looks like Charlotte's family nickname Mignonette and that is a royal nickname if ever I've ever. For most Charlottes, "Char" or "Lottie" would suffice but, as a royal, perhaps Princess Charlotte needed something a little more unique.

According to the website Baby Names, Mignonette is a name of French origin and is said to mean "favourite" or "darling." Awwwwwww. Mignonette is said to derive from the French word "mignon" which Dictionary.com describe as "small and pretty; delicately pretty."

Fans of the royal family seemed to be really happy with this nickname, with many Twitter users expressing their joy over it. One user said "William is calling his daughter Mignonette, how cute" and another added "Love this! Will uses term of endearment 'mignonette', a sweet nickname for Princess Charlotte." I don't know about you, but I'm a huge fan of the nickname.

Earlier on in the clip posted by Kensington Palace, the children can be seen playing Kate's new Back to Nature garden, a prominent feature at the Chelsea Flower Show that she co-designed alongside landscape architect Andrée Davies and Adam White. Much to fans delight, the Kensington Palace Twitter page posted a series of photos of the royal children and their parents playing in the garden. One photo shows the eldest children George and Charlotte sitting happily with their feet in the stream with the caption "the Duchess of Cambridge is a strong advocate for the proven benefits the outdoors has on physical and mental health, and the positive impact that nature and the environment can have on childhood development in particular." Another photo shows Charlotte (or should I say Mignonette) swinging from a rope swing with Kate saying "I really feel that nature and being interactive outdoors has huge benefits on our physical and mental wellbeing, particularly for young children."

The BBC reported that the garden was based on the Japanese art of "forest bathing," which "originates from 1980s Japan, where it was introduced as a national health programme by the government." But what truly is heart warming is seeing the pride and the excitement on the royal children's faces as they explore the garden. So I agree with George, 20 out of 10 for Kate's Back To Nature garden.