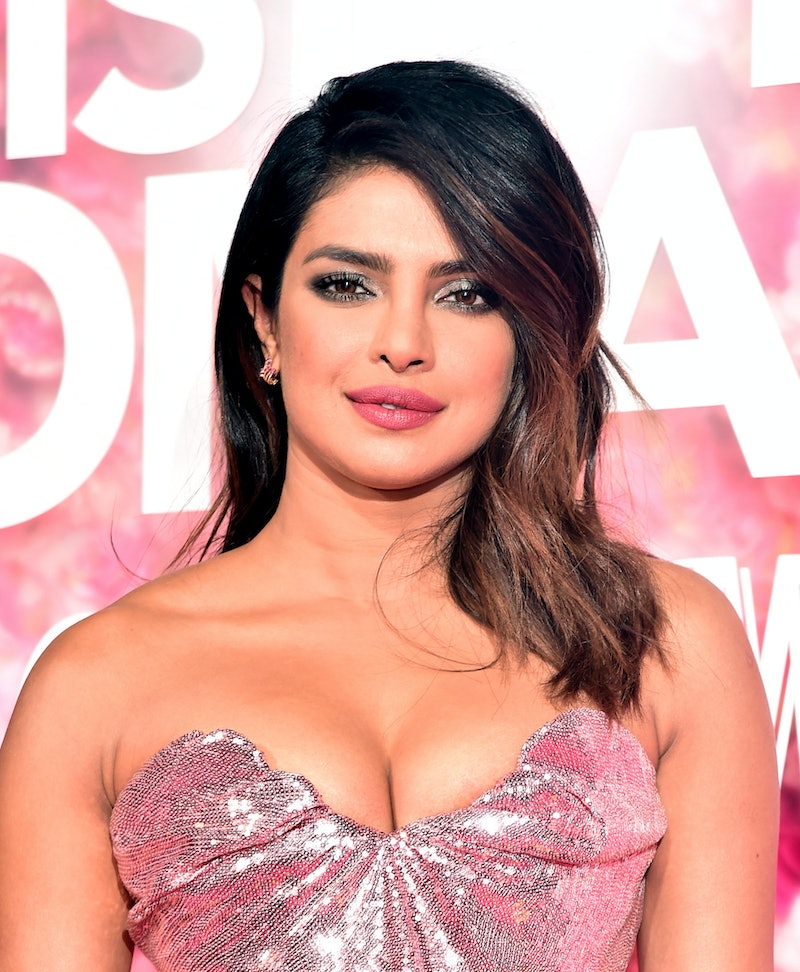 Last week, fans were thrown for a loop when Joe Jonas and Sophie Turner got married in Las Vegas after the Billboard Music Awards, but the wedding definitely seemed to suit the couple. And according to what their sister-in-law has to say about it, it couldn't have been a more perfect night. In an interview with Access, Chopra opened up about Jonas and Turner's wedding, and she had the sweetest comments to share about the event.

Although they've been talking about getting married later this year, Jonas and Turner surprised everyone by making it official at Vegas' Little White Wedding Chapel in a ceremony officiated by Elvis. Diplo live streamed the whole thing on Instagram, and although it was totally unexpected, the bride and groom seemed so happy.

But it doesn't seem like a ton of planning happened beforehand. According to Chopra, who said the wedding was "so Jophie" — her nickname for the couple — a lot of the last-minute details came together during the BBMAs in the final hours before it was all due to happen, including inviting the guests. As Chopra tells it, everyone was invited, including people they'd just met that night at the awards.

“It was really funny. We were at the Billboards. Joe, I think, had this idea that he wanted to do this. But we were at the Billboards and he had these little black cards that we all got. We were randomly inviting our friends, like people that we met. We were like, ‘alright, we’re going to set up this wedding now, we’re going to the chapel right from here, and please arrive, please arrive.’ We had Diplo, Khalid, they were really sweet, they arrived. Diplo Instagram Live-d the whole thing, it was awesome."

Chopra added that after the wedding was over, the fun continued as they drove around in a pink Hummer limo.

And while she also said that Turner and Jonas are still planning to have an "amazing, beautiful wedding" later this year, she pointed out that the fact that their Vegas wedding was so different from her wedding to Nick Jonas is part of the reason that the brothers' relationship is so special.

“It’s exactly who and what we stand for," Chopra said. "Nick and Joe both are so different but are best friends, and that’s what’s beautiful about their relationships. And you can see that in the weddings as well. It was very reflective of the two of them and us as couples, you know?”

Getting married in Vegas couldn't have been more perfect for Turner and Jonas, and now, fans can look forward to seeing what their next celebration is like, too. From what we've seen from this family so far, chances are high they will not disappoint.

More like this
Dixie D’Amelio & Noah Beck “Love Each Other” Despite Breakup Rumors
By Julia Emmanuele, Jordyn Tilchen and Grace Wehniainen
‘RHOSLC’ Star Jen Shah’s Arrest & Legal Drama, Explained
By Brad Witter and Jake Viswanath
The Try Guys Cheating Scandal, Explained
By Grace Wehniainen
An Extremely Messy Ranking Of What Actually Happens In 'Don't Worry Darling'
By Chloe Foussianes
Get Even More From Bustle — Sign Up For The Newsletter