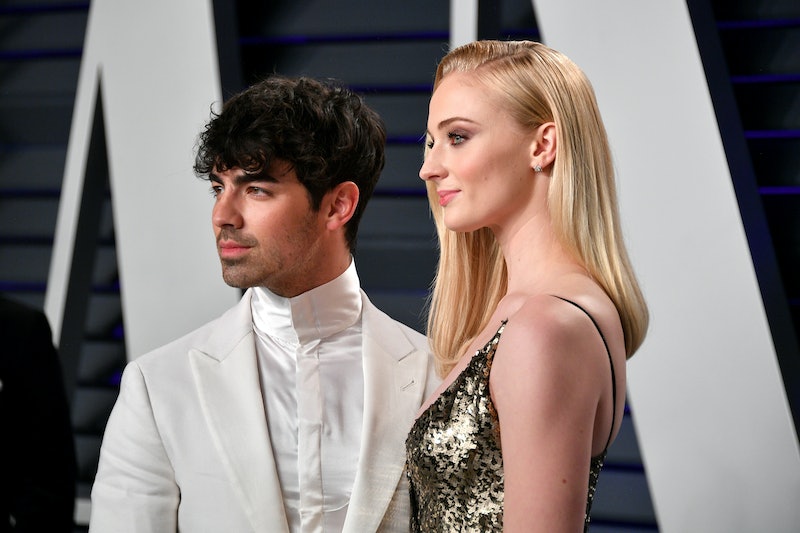 First there was Brangelina, then Kimye, then Speidi. And who could forget Zanessa? (I will always ship them). Whether we love them or hate them, couple nicknames are a thing. Everyone knows if you have a couple name it means you have achieved ultimate-power-couple status. However, it seems that the media and fans aren't the only ones constructing nicknames for power couples, as Priyanka Chopra has a nickname for Sophie Turner and Joe Jonas. And we can't get enough of it.

Following the couple's suprise Vegas nuptials after the Billboard Awards, Chopra said in an interview with Access Hollywood "it was so fun! And it’s so Jophie, I call them Jophie. It’s like, trust them to do that. That is Jophie!" While Jophie doesn't quite have the ring of Speidi IMO, this still 100 percent establishes Turner and Jonas as a power couple.

"It was really funny. We were at the Billboards. Joe I think had this idea that he wanted to do this. But we were at the Billboards and he had these little black cards that we all got. We were randomly inviting our friends, like people that we met. We were like, ‘alright, we’re going to set up this wedding now, we’re going to the chapel right from here, and please arrive, please arrive.’ We had Diplo, Khalid, they were really sweet, they arrived. Diplo Instagram Live-d the whole thing, it was awesome."

Chopra then said explained another part of their wedding that was "so Jophie," telling Access Hollywood about the pink Hummer. "It was so funny! I mean, we were driving around this pink Hummer limo. I was outside the window. It was just epic," the actor said. "I had that long hair extensions that I thought was going to fly out of the window It was that kind of night — a Jophie kind of night."

Cruising around Las Vegas in a pink hummer sounds right up my street. Chopra also seemed pretty excited for her new in-laws and how much their wedding reflected who they are as a couple: "Nick and Joe both are so different but are best friends, and that’s what’s beautiful about their relationships. And you can see that in the weddings as well. It was very reflective of the two of them and us as couples, you know?"

It doesn't look like this surprise Vegas wedding is the last that we'll see of a "Jophie" wedding because Chopra revealed that Turner and Jonas will get married again. She said they will have another "amazing beautiful wedding" and there will be "rugby and football" which I'm guessing shows who they are as a couple, with a touch of Turner's Britishness. If I'm honest, I can't wait for their second wedding, which is rumoured to be in Europe, People magazine reports. I just can't wait to see how "Jophie" it'll be. And, let's be real, only the most elite of power couples have two weddings. Ultimate level accomplished. Turner and Jonas have seriously set the bar high.