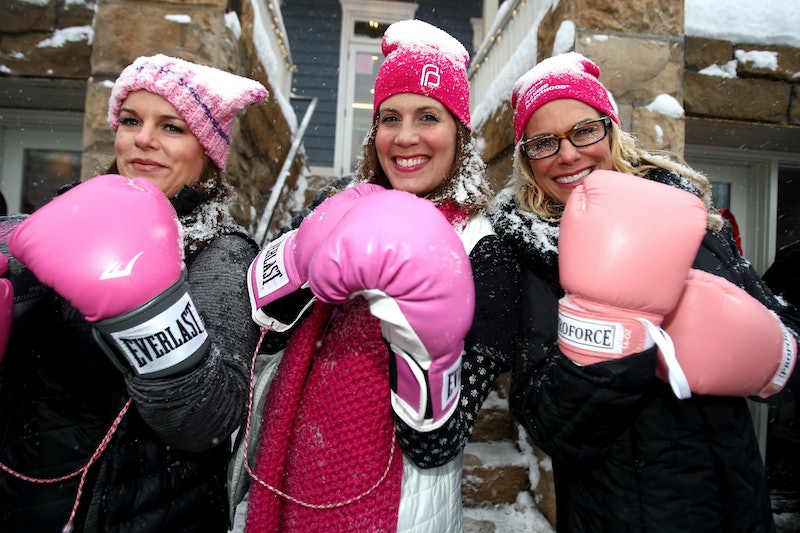 As the annual March for Life came to an end on Friday, a federal district court issued a major win for reproductive rights activists. A U.S. district court blocked Texas' fetal burial rule, which would have forced abortion providers, hospitals, or their patients to either bury or cremate the fetal remains from an abortion or miscarriage. The new regulation, which was supposed to be enforced immediately, would have placed increased financial stress on both health centers and their patients, as well as another burden on people seeking abortions.

Unlike most restrictions targeting abortion providers and their patients, the fetal burial regulation was not a law passed by the Texas state legislature, but a rule finalized by the state's health department during the fall of 2016. The Texas Department of State Health Services amended its health code, requiring embryonic and fetal tissue to be either buried or cremated by the health center and its patients. The rule got rid of all the previous forms of embryonic and fetal tissue disposal, would have applied to elective abortions, ectopic pregnancy surgeries, and miscarriages that have occurred in either abortion clinics, hospitals, or other health centers.

In its initial lawsuit filed with the district court in early December, lawyers for the Center for Reproductive Rights, which is handling the case, claimed the new rule would force both health care providers and patients to work with expensive third-party vendors for the fetal tissue burials.

"[The rule] imposes a funeral ritual on women who have a miscarriage management procedure, ectopic pregnancy surgery, or an abortion," the lawsuit stated. As a result, cost "increases for women seeking pregnancy-related medical care."

The U.S. district court agreed. In its opinion released Friday, the federal court acknowledged that Texas had essentially eliminated "the most used and least expensive methods" of disposal.

According to the court, there might be just one facility in the entire state of Texas willing and able to handle this type of disposal of fetal tissue. The court concluded that this rule, then, would "deliver a major, if not fatal, blow to healthcare providers performing abortions."

The federal court's decision essentially confirmed what many reproductive health advocates already believed: These fetal burial regulations are just another way to shame people who need an abortion. "DSHS admits the Amendments have no health benefits and the prior version of regulations governing tissue disposal induced no health problems," the federal court added in Friday's decision.

So, the fetal burial rule was politically motivated. Like the previous Texas law HB2, which was partially struck down by the Supreme Court in June 2016, Texas created this regulation under the guise of protecting women's health and maintaining dignity and respect "for life."

Today’s ruling acknowledges that these regulations do nothing to protect public health while imposing new burdens and uncertainty on health care providers and the diverse communities they serve. ... Our Constitution protects a woman’s fundamental right to access reproductive health care without needless barriers, and we will continue fighting for decisions like this wherever politicians choose to ignore that right.

Amy Hagstrom Miller, executive director of Whole Woman's Health, which was the lead plaintiff in the lawsuit, added: "We will not back down and we are thrilled that, yet again today, Whole Woman’s Health brought victory for Texans."

The political motivation should be obvious. The Texas health department introduced the first draft of the fetal burial rule just four days after the SCOTUS ruling overturning HB2. Lawyers from the Center for Reproductive Rights saw this fetal burial rule as a direct response to that SCOTUS loss.

But this fetal burial rule in not a Texas creation. Indiana became the first state to pass this type of regulation, in the spring of 2016. Vice President Mike Pence, who was the governor of Indiana at the time, approved the law, which also banned abortions in cases when a fetus had been diagnosed with a disability. A federal court also blocked Indiana's fetal burial law.

Louisiana, too, attempted to pass similar fetal burial and cremation legislation in 2016. The Center for Reproductive Rights also sued Louisiana, and that case is currently tied up in litigation.

These types of regulations reveal just how creative anti-abortion legislators and officials are getting, but it's obvious that these new rules and laws have very little health benefits. Like most laws targeting abortion providers, the fetal burial and cremation guidelines would only further place an undue burden on people seeking abortion — a health procedure that is already endlessly under attack.