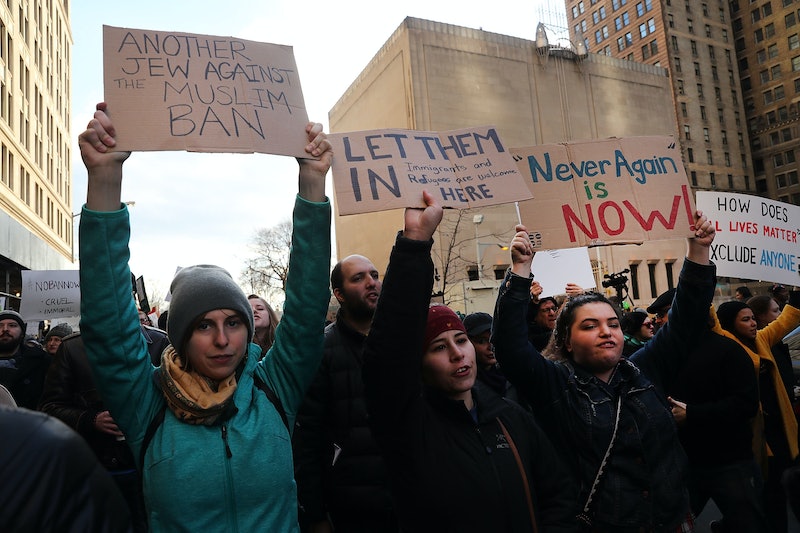 After President Donald Trump's immigration orders set a temporary refugee ban as well as an immigrant ban in seven Muslim-dominant nations, protests arose in major cities across the U.S. But the work is far from done, and there will undoubtedly be more protests in the coming days and weeks — for the next four years, if need be. If you're looking for pro-refugee sign ideas for the next protest, then look no further than here. Between some of the clever ideas that have already debuted at protests this weekend and the tried-and-true phrases that will always make an impact, you have plenty of options for signage.

And don't worry about getting too fancy with it, either. Yes, the colorful and artistic signs are always going to get more attention, but if worrying that your sign isn't ~good enough~ is keeping you from getting your hustle on at a protest near you, then believe you me — nobody is judging your sign for how pretty it looks. They are appreciating it for whatever message it sends. And right now, our messages to our government, our country, and to the rest of the world have never needed a platform quite like the one that American citizens can provide.

So go do what I did yesterday, and classless-ly rip a flap off a random box your neighbor was recycling, grab a pen, and get a move on! Here are a few pro-refugee sign ideas to get you started:

Among the ones that were chanted in cities across the nation this weekend:

Quotes From Emma Lazarus's Poem On The Statue Of Liberty

"The New Colossus," the poem inscribed on the Statue of Liberty was written in 1883 to convey that the U.S. was a safe harbor for immigrants and refugees — the very "tired," "poor," and "huddled masses" that the text refers to. Protesters are inscribing bits of the poem on their signs, particularly the quote at the end. (This was my SUPER last minute sign below.)

"The New Colossus," by Emma Lazarus

With conquering limbs astride from land to land;

Here at our sea-washed, sunset gates shall stand

A mighty woman with a torch, whose flame

Is the imprisoned lightning, and her name

Mother of Exiles. From her beacon-hand

With silent lips. "Give me your tired, your poor,

The wretched refuse of your teeming shore.

Send these, the homeless, tempest-tost to me,

I lift my lamp beside the golden door!"

You know Millennials are protesting when you see signs like ~these~.

Something Personal From Your Own Life

Some of the most impacting signs in the protests are the ones that strike close to home. If you or your family members are affected by the ban — or would have been, if this ban were put into effect in the years your family immigrated to the states — and you feel comfortable sharing, these kind of signs spark a deeper conversation.

The truth is, though, that you don't even need a sign to go out and protest. Yes, it always helps — so if you've got the time and materials, don't overthink it. But at the end of the day, the thing protests need most? You.