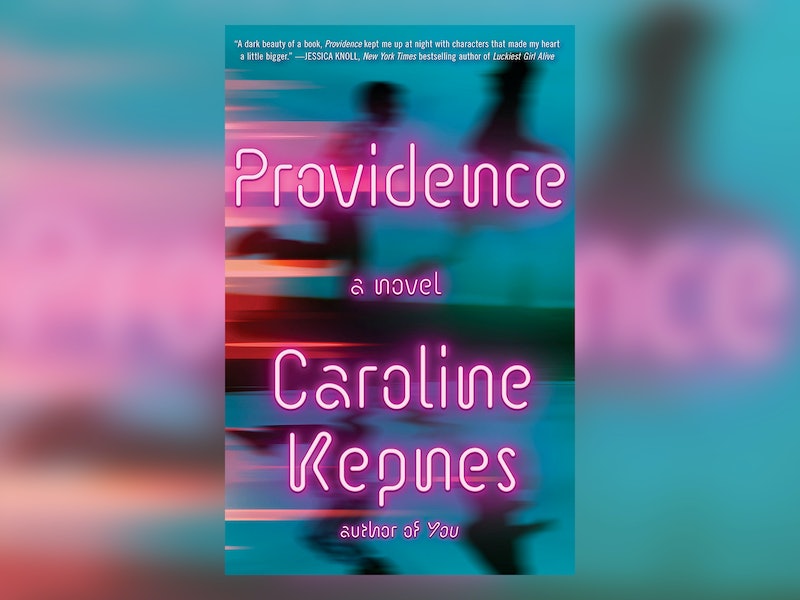 When you pick out a summer read, what is it that you're looking for? Is it a love story you can cheer for, a bit of horror that will keep you up at night, or perhaps a mystery you can't wait to solve? If you, like me, want a summer read that can do it all, it's time to pick up Caroline Kepnes's new book Providence, a fascinating genre-bending novel you won't be able to put down.

Some people would call Jon Bronson odd. He's the kind of kid who reads books about the history of marshmallow fluff and lets his class hamster sleep in bed with him. He's the boy in school the jocks love to pick on and the girls think is weird. But Chloe, Jon's best friend, doesn't think he's weird. She's really his only friend — and his soul mate, too. She sees Jon for who he really is — someone like her whose "heart spreads out in the stupidest ways."

That is why, when Jon vanishes one morning, all eyes in their small town of Nashua, New Hampshire, are on Chloe. She is the only one who knows that he takes the long way to school to avoid bullies, or that he likes to spend his afternoons hiding out in the shed in the woods. But even her insight into Jon's life isn't enough to help to cops find him. It doesn't take long for the town to lose interest in the strange boy's disappearance, and soon enough, it seems like Chloe is the only one who remembers he's missing at all. Determined not to lose him or let herself forget too, Chloe collects her best friend's favorite newspaper and sketches pictures of Jon every day. That is, until the day she doesn't, until the day she opens her heart up to the possibility of another boy and a normal high school experience. “I love Jon. I want Care. My heart must be bigger than normal," she laments. "Or maybe that’s just this pool, this summer, the summer we got boys, the summer Jon became like an eyelash that gets stuck beneath the lid, that makes me blind and tearful, but eventually falls away.”

Four years later, just a few months before graduation, Jon wakes up in a strange basement with no idea of how he got there or how much time has passed. Next to him is a used copy of H.P. Lovecraft's The Dunwich Horror, and a note from Roger Blair, Jon's old substitute teacher and the man he remembers taking him in the woods that fateful day he disappeared. “Time moves forward. You should too," it reads in part. "You have power, power that will present itself to you slowly, so as not to overwhelm you. Take it in stride.”

No one is more surprised to learn Jon has reappeared than Chloe, who had given up all hope of reuniting with her best friend. It doesn't help that the man in front of her is nothing like the boy she remembers. Once a scrawny little kid, Jon is bigger and stronger than ever before. It's obvious they both want to pick up where they left off, to see if their young love can finally become a real romance, but when Jon realizes that the strange "power" Blair gave him has the potential to hurt, even kill, the ones he loves the most, he disappears again. Determined to keep Chloe safe and find out what really happened to him, Jon sets out on a journey for answers.

Meanwhile, in Providence, Rhode Island, young people are inexplicably dying of heart attacks, and Charles "Eggs" DeBenedictus suspects the deaths must be the work of a serial killer. It's only when he starts to look into his hunch that the troubled detective with plenty of heartache of his own realizes there is something much more sinister, and much harder to explain, happening. Also in Providence is Jon, living under different names and desperately searching for a way to stop his powers from making him the monster he fears he has become.

Switching narrators with each chapter, Providence follows Jon, Eggs, and Chloe, who has become a famous artist in New York, on their separate but interconnected journeys towards the truth. But the closer they get to the answers they're looking for, the more questions they're forced to ask: What lengths should you go to in order to protect the ones you care about? Is it worth it to sacrifice love for safety, connection for protection? Where is the line between human and monster, and what pushes us over the edge?

A beautifully crafted narrative that deftly combines a sweet coming-of-age love story with elements of Lovecraftian horror and supernatural suspense, Providence is Kepnes at her best. A rich novel brimming with as much heartfelt emotion as genuine thrills, it will keep readers flipping the pages at a rapid pace, searching for answers to their own questions about love, truth, connection, and what it means to be human.