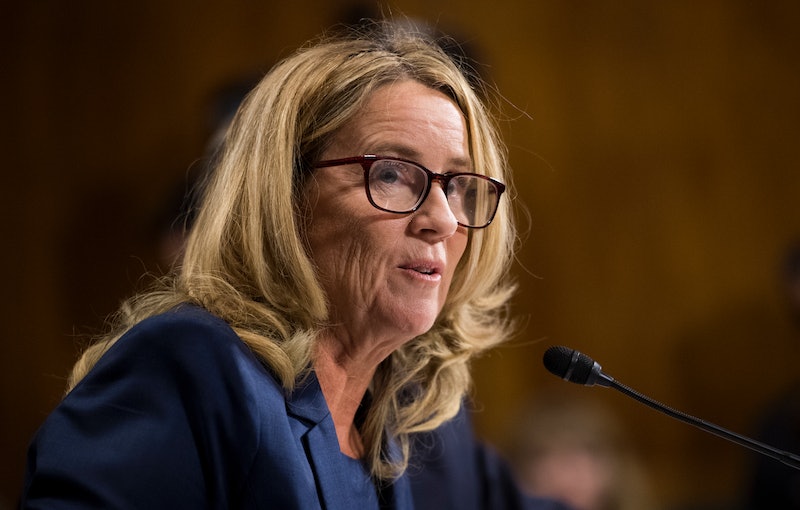 In late September 2018, the confirmation hearing for then-Supreme Court nominee Brett Kavanaugh elicited intense attention and controversy across the United States, to say the least. Now, months after his confirmation to the Supreme Court, public opinion of Christine Ford and Kavanaugh has changed in very specific ways, a poll by the nonpartisan public policy research firm PerryUndem concluded.

First off, public trust in Dr. Ford over Kavanaugh was nine points higher than what Quinnipiac University noted last year in September 2018. The think tank further stated that 57 percent of participating people said that they believed Kavanaugh "likely lied under oath about his teenage years." At 49 percent, almost half of the polled people viewed Kavanaugh with disapproval. It's not too different from an ABC News and Washington Post poll from 2018 that stated that the majority of its participants opposed Kavanaugh's confirmation.

This all comes months after Ford appeared before the Senate Judiciary Committee in September to testify about her sexual assault allegation against Kavanaugh (who denied Ford's accusation). In her opening statement, Ford stated: "I am here today not because I want to be. I am terrified. I am here because I believe it is my civic duty to tell you what happened to me while Brett Kavanaugh and I were in high school."

PerryUndem suggested that the Kavanaugh hearings influenced how Americans voted in the 2018 midterm elections, too. According to the firm, the heated confirmation hearings gave Democrats an advantage over the Republican Party. The think tank stated that the public "feeling unfavorably toward Justice Kavanaugh motivated people to vote for the Democratic candidate for US House of Representatives — above and beyond typical factors, such as party affiliation." However, the survey did not specify whether Republicans felt compelled to shift party loyalty and vote for Democrats.

Additionally, PerryUndem tackled the subject of public perception of sexist behavior. In another section of its key findings, PerryUndem concluded that "Republican men reverted backward in their views toward women." Some 68% of Republican men in the poll stated that they believed that "most women interpret innocent remarks or acts as being sexist." The think tank noted that the view got a 21-point increase compared to the 47 percent of GOP men who believed the same in their 2017 poll.

The think tank went on to add that Kavanaugh hearings affected how some parents discuss sexual assault and the subject of consent with their children. Apparently, one in three parents in the PerryUndem survey said that they were having conversations with their children about consent and sexual abuse as a "direct result" of the confirming hearing.

On a broader cultural level, 70 percent of the participants said that American society "does not teach men to be thoughtful about how they relate to women when they feel sexual attraction." The hearings also pushed 65 percent of the survey participants to actively think about the effect of sexism in American culture, according to PerryUndem.

It's a detailed and exhaustive poll with multiple charts and indexes to illuminate the shift in the American public's view of Ford and Kavanaugh. If you're interested in learning more about the short- and long-term effects of the Kavanaugh hearings, head on over to PerryUndem's full survey notes.