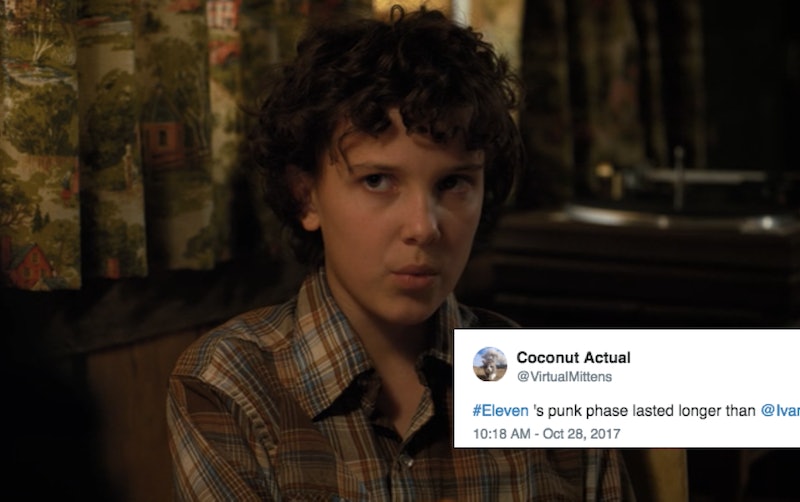 Extremely mild spoilers for Stranger Things 2 ahead. When beloved Eleven is introduced into the new season of Stranger Things, it's shown that she's been living in a rustic cabin in the woods for the better part of 1984. And as it turns out, Punk Eleven from Stranger Things 2 is the last-minute Halloween inspo that every "I'll just wait to figure a costume out" fan needs. The odds are, you have half of the stuff you need lurking in your closet already.

After a year outside of the Hawkins laboratory, fan-favorite Eleven is growing out her buzz cut. It's not like her buzz cut was a conscious aesthetic choice; her life as a secret government lab rat likely didn't offer her many of those. The folks at the lab probably kept her hair short to make it easier to map her brain. So, what's a fierce, supernatural child to do once she's escaped a horrific facility and found herself essentially trapped in a remote Midwest cabin? Get real punk with it, of course.

Eleven's short curls, flannel shirts, t-shirts, and attitude are all emblematic of a budding Indiana punk. Like all good punks, she's sad, angry, and ready to take down The Man. Even if "the man" is housing, feeding, and clothing her. Not in a weird way. You just kind of have to see it.

Who hasn't felt trapped between Eleven in disguise and Eleven rebelling, after Halloweekend? Aesthetically, of course. And emotionally, too.

Why settle for just one? Eleven would probably appreciate a little vampire. She stays at home to watch Frankenstein on Halloween, after all. Although, that might be because she finds it relatable. Hmm.

3. Another Was Ready To Stan

No one blames him for that, though his use of "spirit animal" might need some work.

4. This Fan Has Already Committed To Punk Eleven

They were punk Eleven before there was punk, or Eleven. Was MTV in Indiana by 1984? Is this person going as the future for Halloween? Kidding, kidding.

5. Some Were Ride-Or-Die For Punk Eleven

Don't push her on this one. You might just lose all your Halloween candy.

6. One Person Had The Best Political Burn

Nailed it. If there's a way to shape this one into a last-minute Halloween 2017 look, it could be a costume contest winner.

7. This Fan Said What Everyone Is Thinking

8. Another Fan Loves Punk Eleven So Much They Were Rendered Unable To Continue Using An Inside Voice

You don't get dibs on her look just because you yelled about it. Do you even have blood running out of your nose? Oh, you do? Well, fine. This is your aesthetic, then. Halloween is a state of mind.

How thoughtful — she even used a Joyce Byers GIF from Season 1, so as not to spoil the look for fans.

10. One Person Is Already Stressed Out Over Which DIY Stranger Things 2 Look To Take On For Halloween

Shoutout to people who wait until the Friday night beforehand and still can't make the right call on a Halloween costume. It's not easy.

11. The Punk Eleven Look Gets The Emoji Of Approval

Anyone else have "Judy Is A Punk" stuck in their head, now?

If you wanted to dress up for Halloween, but found yourself at a loss, let Hawkins' adorable androgynous terror be your guide. Let's be real, too: You definitely had all of this in your closet already. In fact, you might be wearing it right now. So grab a tube of fake blood (or even just a red lipstick you don't use, no judgment here), a box of Eggos, and your spookiest scowl. You've got yourself a Punk Eleven look just in time to trick-or-treat. Or spill a cup of mystery punch on yourself as a party, if that's more your speed, Nancy Wheelers of the world.

More like this
Caleb McLaughlin Details Racism From 'Stranger Things' Fans
By Radhika Menon
Kate Bush Revealed The Real Meaning Behind 'Running Up That Hill' Lyrics
By Darshita Goyal
10 Stranger Things-Inspired Halloween Costumes For True Fans
By Emma Carey
26 Ghost Story Podcasts To Get You Ready For Halloween
By Jessica Booth, Mia Mercado, JR Thorpe and Emma Carey
Get Even More From Bustle — Sign Up For The Newsletter