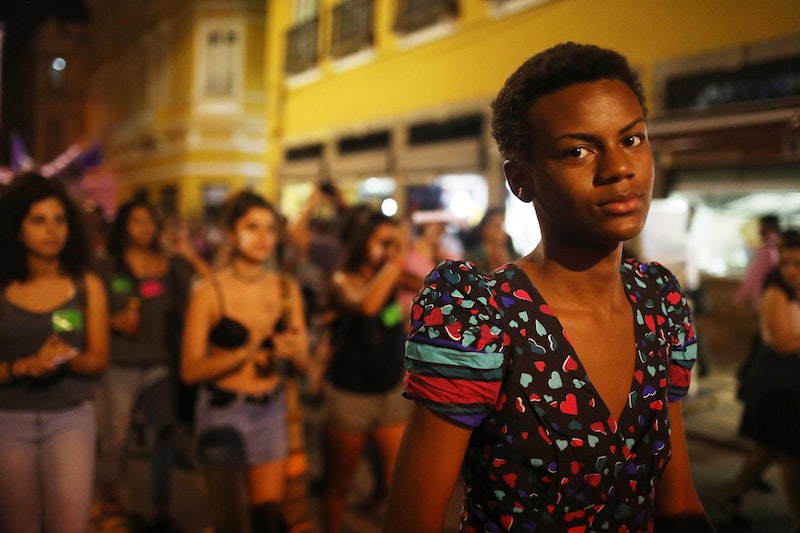 When I gave birth to my daughter, I never imagined this could be her future. But we have to face facts. Abortion is being criminalized and pushed out of reach, and when this happens, the harm falls hardest on low-income people, women of color, and young people. It’s for exactly this reason that appointing Brett Kavanaugh to the Supreme Court would be disastrous for poor women and people of color.

If Roe v. Wade is overturned outright or reduced to a legal fiction, wealthy women will still have abortions in this country. That has always been true. Attacks on abortion are attacks on the low-income women who are left to fend for themselves when abortion is made inaccessible.

In 2014, three-fourths of abortion patients were low-income, with half (49 percent) living at less than the federal poverty level. And low-income women are disproportionately women of color. Black and Latina women are more likely to experience unintended pregnancy than white women, and disproportionately likely to need abortion care. When a woman wants to get an abortion but is denied, she is more likely to fall into poverty, less likely to have a full-time job, and twice as likely to be a victim of domestic violence.

Unfortunately, we’re already starting from a pretty grim place when it comes to abortion access. Many think it’s easy to get an abortion in the U.S., but it’s not. Since 2011, politicians have quietly passed more than 400 new abortion restrictions. As a result, politicians have created “abortion deserts” that force a woman to drive hundreds of miles or get on a plane just to get care.

In West Virginia, a constitutional amendment will appear on the ballot this November that would take away the right to legal abortion for women – meaning that if Roe v. Wade falls, abortion could become illegal overnight in a state where one in five women earn income below the poverty line. When you are living paycheck to paycheck, it’s just not possible to come up with money for a plane ticket to states where abortion will remain legal, such as New York or California.

And even if she can get to a clinic, she might not be able to afford to pay for care. Bans on insurance coverage for abortion push care out of reach for many. Restricting Medicaid coverage of abortion forces one in four poor women to carry an unwanted pregnancy to term.

President Trump repeatedly promised to appoint only justices who will take away our right to legal abortion by overturning Roe v. Wade. Trump said he wants to punish women for abortion, and Pence wants to put Roe in the “ash heap of history.” This seems to be one promise the president plans to keep – but we can’t let him. If Kavanaugh is confirmed, the balance of the court will almost certainly turn against the constitutional right to abortion and access to abortion – and marginalized women will pay the price.

This moment in our history brings serious challenges, but we know what it's like to fight and win against tough odds.

Kavanaugh has shown us his stripes. He issued a ruling to allow the government to continue blocking the abortion of a young immigrant woman, forcing her to remain pregnant against her will. He praised Chief Justice William Rehnquist’s dissent in Roe v. Wade – joining Rehnquist in criticizing rights (such as abortion) not specifically enumerated in the text of the Bill of Rights. He has also sided with bosses who want to deny birth control coverage, with employers in discrimination cases, and against the rights of students with disabilities. Kavanaugh has repeatedly protected the privileged and powerful over the rights of women, immigrants, young people, and workers.

Abortion access in the U.S. today depends largely on where you live, how much money you make, and where you get your health insurance. But it doesn’t have to be this way. In fact, we had been making some headway: in 2016, the Supreme Court struck down a law intended to close clinics and allowed for several similar laws to be successfully blocked. And we’ve we’ve introduced legislation to stop politicians from banning insurance coverage for abortion.

This moment in our history brings serious challenges, but we — women, people of color, young people, immigrants — know what it's like to fight and win against tough odds. We know that a large majority of people are with us (seven in 10) and now is the time for everyone to speak out and show up.

Our struggle for justice is so much bigger than abortion. It is for equality, dignity, and justice. It’s time to unite, to act, and to make our voices heard.

Destiny Lopez is the co-director at All Above All and stands united to lift the bans that deny abortion coverage.