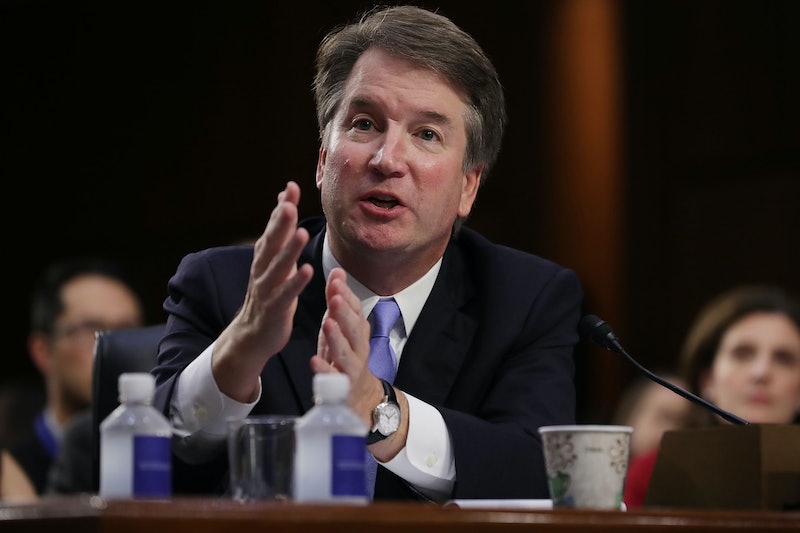 On Tuesday evening, Republican senators in the Senate Judiciary Committee let the public know they hired outside counsel for the hearing on Thursday. Rachel Mitchell, who will question Christine Blasey Ford and Brett Kavanaugh on behalf of the GOP portion of the SJC, is a prosecutor from Arizona. The goal of hiring Mitchell, according to Chairman Chuck Grassley, is to "de-politicize the process and get to the truth" — even though the move goes directly against Ford's wishes.

The goal is to de-politicize the process and get to the truth, instead of grandstanding and giving senators an opportunity to launch their presidential campaigns. I'm very appreciative that Rachel Mitchell has stepped forward to serve in this important and serious role. Ms. Mitchell has been recognized in the legal community for her experience and objectivity.

The desire to find outside counsel reportedly stemmed from the Republicans' fears of "optics," given that all 11 Republican members of the SJC are white men. And despite Ford's explicit and repeated requests that senators ask the questions, it now seems to be a done deal that Mitchell will ask them instead.

Both Ford and Kavanaugh will appear before the SJC on Thursday, one after another. Kavanaugh has repeatedly denied both Ford's and Deborah Ramirez's sexual misconduct allegations. As of now, Ramirez is not scheduled to testify before the SJC at any point.

According to The Washington Post, Mitchell is the sex crimes bureau chief for the Maricopa County Attorney's Office in Phoenix. She is a registered Republican who has worked in the same office for 26 years. Of her decision to pursue a legal career related to sex crimes, Mitchell said via The Washington Post, "It struck me how innocent and vulnerable the victims of these cases really were.”

Mitchell has been quoted in a number of interviews and books as a result of her legal acumen, but there's one particular quote from the book One Child At A Time that has been circulating on Twitter since the announcement of her hiring. Mitchell said, "In the myth, we tell our children to watch out for the guy in a trench coat, the stranger ... We don't tell them to stay away from their baseball coach."

One of the most frequent defenses that has been made on behalf of Kavanaugh by his supporters is the notion of him being a "good person," with people often citing his role as a basketball coach as evidence to that fact.

Mitchell has not spoken publicly yet about her newfound role in the Kavanaugh/Ford hearings.

Grassley's statement noted Mitchell's objectivity as a prosecutor as one of the reasons why she was selected. He said in his statement, "I’m very appreciative that Rachel Mitchell has stepped forward to serve in this important and serious role. Mrs. Mitchell has been recognized in the legal community for her experience and her objectivity."

Grassley continued, "I've taken this additional step to have questions asked by expert staff counsel to establish the most fair and respectful treatment of the witnesses possible."

More like this
Here’s Everything You Need To Know About Operation London Bridge
By Bustle UK
Lori Vallow’s Son Was Arrested For Sexual Assault Days Before 'Sins Of Our Mother' Premiered
By Brad Witter
10 Must-Read New Books Out This Week
By K.W. Colyard
The Miraculous Real-Life Thai Cave Rescue Mission Still Resulted In 2 Deaths
By Brad Witter
Get Even More From Bustle — Sign Up For The Newsletter