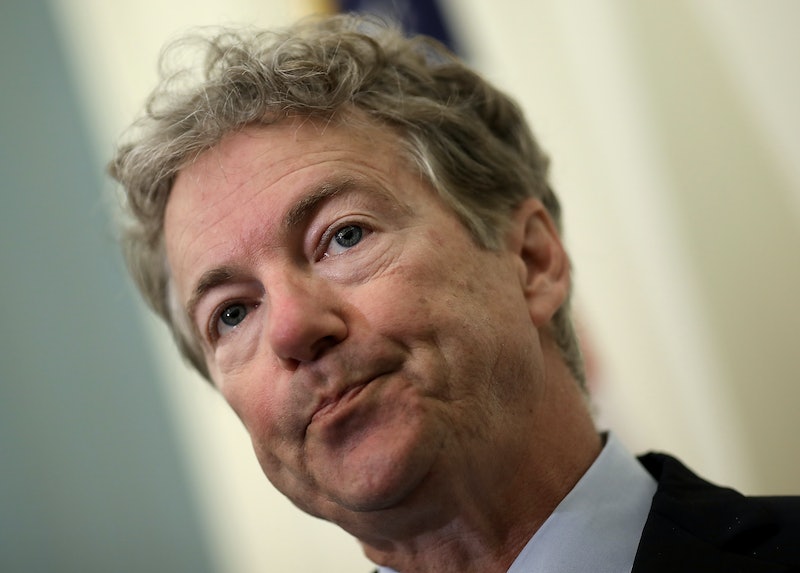 The White House has become a school yard of rumors this week, after the publication of a The New York Times opinion piece by a senior official exposed a network of aides supposedly working to minimize the damage of President Donald Trump's "misguided impulses." The nation is buzzing, wondering who the anonymous author may be. On Thursday, Senator Rand Paul suggested the anti-Trump New York Times op-ed author could be found using lie detectors. At a rally on Thursday night, Trump denounced the op-ed's claims as "lies," NBC reported.

While the op-ed did not reveal any government secrets, instead focusing more on the general mood of the West Wing, Paul voiced concerns that the author's willingness to speak to the press could pose a threat to security.

"This could be very dangerous if the person who is talking to the media is actually revealing national security secrets," Paul added. "I think we need to get to the bottom of it."

The op-ed, titled "I Am Part of the Resistance Inside the Trump Administration," says there is a network of professionals who remain in the White House, having vowed to "preserve our democratic institutions while thwarting Mr. Trump’s more misguided impulses until he is out of office."

The author clearly states they are not from the progressive left. They are a supporter of the Trump administration and many of its policies, but they had some harsh criticism to share on the president's leadership style, calling it "impetuous, adversarial, petty and ineffective."

"Meetings with him veer off topic and off the rails, he engages in repetitive rants, and his impulsiveness results in half-baked, ill-informed and occasionally reckless decisions that have to be walked back," wrote the author, saying the root of the issue is Trump's "amorality."

Trump, meanwhile, has suggested The New York Times contributor is a "phony source." If the "gutless" writer is real, however, the president said The Times "must, for National Security purposes, turn him/her over to government at once!"

According to Paul, though, anyone with a security clearance in the White House should undergo a lie detector test. This may root out the op-ed's author, but only if the author is unable to keep their cool.

Lie detectors, or polygraph tests, work by measuring the subject's breathing, heart rate, blood pressure, and other bodily aspects that are affected by the nervousness commonly associated with lying. If the subject isn't nervous about lying, however, results might not be accurate.