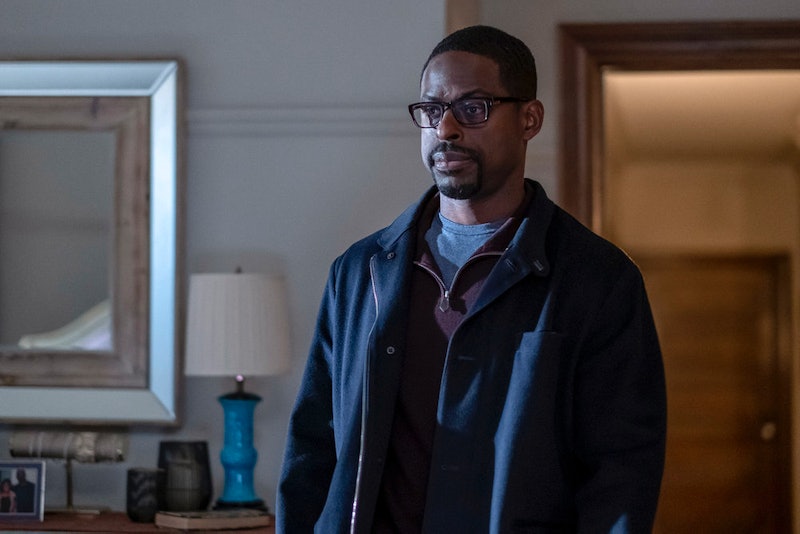 Spoilers ahead for This Is Us Season 4, Episode 15. Randall took a big step forward on This Is Us by going to therapy for the first time, but it's bound to lead to some turmoil. Randall's therapist is played by Pamela Adlon, whom creator Dan Fogelman teased will be a big part of the rest of the season. Randall had previously said therapy wasn't for him, but it's great to see him giving it a chance, and hopefully in the long run it really helps. However, in the short term, his therapy session previewed where Randall and Kevin's eventual fight may stem from.

During therapy, Randall revealed that he doesn't think anyone else in his family can take care of his mom — not even her husband Miguel. And, in his eyes, especially not Kevin. "My brother? Ha ha, just you wait. By the end of this session, I'll get a text saying that he completely lost track of time and forgot about [Rebecca's doctor] appointment," Randall said. In contrast, Kevin not only remembered the appointment, he was adamant that his mom go — even when she tried to cancel it. But Randall doesn't see that side of Kevin, and he values himself as the man of the family ever since his father died. "If it wasn't for me, this whole family would have fallen apart," Randall said. His therapist questioned whether that was actually true, and that's when Randall got up and left.

It's easy to see where this can all go very wrong and lead to sibling rivalry and tension and eventually a complete rift in the family. And that may only get worse as Randall continues therapy, because it is a very raw experience. As he learns more about himself, and is pushed to reconsider things he's thought of as facts, he may have less patience for Kevin's behavior and Kevin's own relationship with their mother.

Deadline reported that Fogelman said at a recent TCA panel that Randall's storyline with his therapist will be a "very intense" one. He added that Adlon "has an unbelievable arc in the back of the season, she plays a limited but very important part of that story." Viewers only got to see Adlon's face for a brief moment at the end of Tuesday's episode, but as Randall goes back to therapy, we'll see and hear more of her. Viewers may recognize her face from some of her other big projects like Better Things and Louie, and her voice from her time voicing characters in Bob's Burgers, Rick and Morty, and more.

Whether Randall and Kevin's fight is prompted in part by the work Randall is doing in therapy and the realizations he comes to (intentionally or unintentionally) or not, it's going to be a doozy. Justin Hartley, who plays Kevin, told Entertainment Tonight that it's not your average brotherly argument. "It's big. No, it's big, big," Hartley said. "It's more than a misunderstanding. I think it's a philosophy. It's like, 'This is how you handle your life and this is how you deal with things and this is what you think. I go about my business a different way,' and they just can't [see eye to eye]." He added, "This is two men, two brothers each taking a stand that suggests that if they don't bend, the other one will not be in their life." Sterling K. Brown, who plays Randall, also told Entertainment Weekly that those issues Kevin and Randall have about who the "man" of the house is — so to speak — will always come up for them.

Even though Kevin and Randall will go through this big fight and a period of not talking, fans have seen in flash forwards that they do eventually come back together. In one of them, Randall goes to Kevin's house to see his ailing mother. If she's living with Kevin, Randall must have let go of the control around her care a little bit and let his brother step up too. Brown promised People magazine that these upcoming trials and tribulations won't last forever.

"There's harmony to come from the siblings, from these two brothers," he said. "While there’s going to be tough times ahead, this family, whatever happens in the future, finds its way back to one another. In the course of the show, you will see the light and the dark, but you will always finish in the light, always."

More like this
'Firefly Lane' Season 2 Will Be The Show's Last — But There's A Twist
By K.W. Colyard and Grace Wehniainen
'The Rings Of Power' Episode 7 Will Feature An “Unlikely Pairing Of Characters”
By Grace Wehniainen
Rhaenyra's Sons May Not Last Much Longer On 'House Of The Dragon'
By Grace Wehniainen
Laenor’s Fate On House of the Dragon Differs from The Book In One Crucial Way
By Kadin Burnett
Get Even More From Bustle — Sign Up For The Newsletter