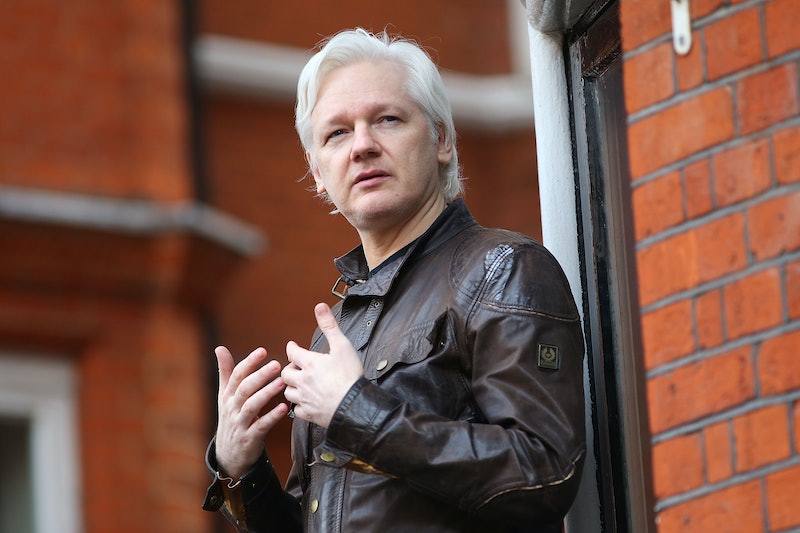 To say that Julian Assange is proud of himself for Wikileaks' role in exposing Hillary Clinton campaign aides' communications would be an understatement. In fact, based on what the Wikileaks founder wrote in the foreword to journalist Joe Lauria's new book How I Lost By Hillary Clinton, he believes Americans should just thank him. They, by Assange's account, are significantly better off because of Wikileaks' role in the 2016 election.

In the foreword, Assange examined allegations that WikiLeaks "play[ed] a partisan role" in the 2016 presidential election. Criticism that Assange helped Trump win largely stems from WikiLeaks' decision to publish a large number of emails hacked from Democratic National Convention (DNC) staffers and Clinton's campaign manager, John Podesta. These emails, American intelligence has concluded, were hacked by Russians with the intention of swaying the election results in Trump's favor.

According to some analysts, it worked.

"The evidence suggests Wikileaks is among the factors that might have contributed to [Clinton's] loss," argued data journalist Harry Enten in FiveThirtyEight. Other analyses were more severe: "WikiLeaks has joined the Trump administration," declared journalist Max Boot in a Foreign Policy editorial.

"I love WikiLeaks!" Donald Trump told a crowd of supporters weeks before the election.

But Assange, to put it bluntly, isn't sorry. Instead, he argued that WikiLeaks has improved Americans' relationship with the media and skepticism of politicians.

From the Podesta emails we have learned a lot about journalism and 'journalisn't.' We now know the outlets and journalists that are willing to provide an advantage to their preferred candidate. We now better understand how to read the “news” that comes from certain outlets, and that journalists provide questions prior to them being asked and articles for vetting prior to their publication. How can we make informed decisions when we rely on distorted sources of knowledge?

But experts tell Bustle that WikiLeaks may have encouraged willful ignorance rather than healthy skepticism.

"I think some of the critical information exposed by WikiLeaks simply helps reinforce things that people believe when they want to believe something, or provides ammunition for an argument," Roy Gutterman, director of the Tully Center for Free Speech at Syracuse University, tells Bustle.

"I'm not sure that WikiLeaks has made people more critical consumers of news as much as less trusting in authority, including the news media."

Take disgruntled Bernie Sanders supporters, for example — one of the groups Assange claims in his foreword to have helped. WikiLeaks released DNC emails that Sanders supporters interpreted to mean the primaries were "rigged" against their candidate, something that infuriated many of them and turned them further against Clinton and/or kept them home in November.

However, as Newsweek's Kurt Eichenwald explained, "The fact that the dates of the most controversial emails ... were after it was impossible for Sanders to win was almost never mentioned, and was certainly ignored by the propagandists trying to sell the 'primaries were rigged' narrative."

As Gutterman says, people aren't more skeptical consumers because of WikiLeaks — they're just likelier to believe what they want to believe, regardless of what credible outlets report. And that distrust can lead to a dangerous dismissal of credible journalism.

"I'm not sure that WikiLeaks has made people more critical consumers of news as much as less trusting in authority, including the news media," Shana Gadarian, a political communications professor at Syracuse University, tells Bustle. Gadarian draws a distinction between consuming news critically, which implies that the consumer is analyzing the angle of the news they're presented with, and simply distrusting what one reads.

Thinking critically about a story on CNN, for example, is not the same thing as dismissing CNN, the way the current administration sometimes does, as "fake news media."

"The idea that people in authority are hiding things or that the public is being lied to does not serve the wider public. Trust in institutions is necessary for those institutions to function properly," Gadarian says.

Assange also congratulates himself for leaking information about the Democratic National Committee, writing in the foreword:

Now that information is known there is greater understanding about how that institution and its leaders actually behave, making it much harder for that kind of corruption to be repeated.

Newhouse Journalism School professor Jennifer Grygiel tells Bustle, "I see WikiLeaks as just another source that needs to be consulted and vetted."

Gadarian echoes this point: "WikiLeaks is not a media outlet. It's a purveyor of information. It does not necessarily vet its sources or provide context. It does not tell the public why something is important or what its implications are."

In contrast and unlike Assange's work, Gadarian says, "News outlets have a responsibility to source information and present it in a more responsible way."

More like this
Watch Jacinda Arden’s Devastatingly Honest Resignation Speech
By Sam Ramsden
What The UK Blocking Scotland’s Gender Recognition Bill Means
By Sam Ramsden
Eurovision Has Been Given A Whole New Look Ahead Of Its Liverpool Debut
By Bustle UK
Man Meets Politics: ‘Boy Meets World’ Star Ben Savage Is Running For Congress
By Jake Viswanath
Get Even More From Bustle — Sign Up For The Newsletter
From hair trends to relationship advice, our daily newsletter has everything you need to sound like a person who’s on TikTok, even if you aren’t.