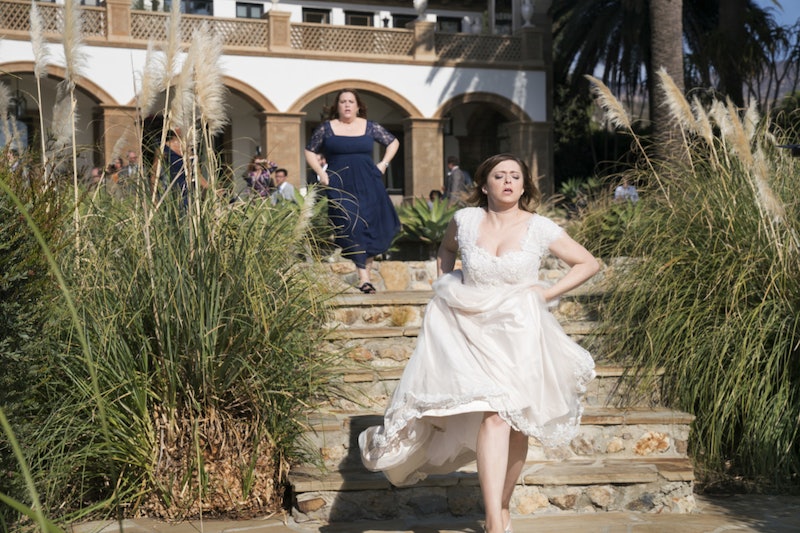 Crazy Ex-Girlfriend's brilliance has always been in its ability to skewer reductive stereotypes. Across three seasons, we've seen Crazy Ex-Girlfriend's Rebecca Bunch cycle from obsessive ex to crazed bridezilla to vindictive femme fatale. But what ties them together is that, for Rebecca, they are always a performance. She's far too complex a woman to fit some one-note gender trope, and the harder she fights against that, the more apparent it becomes. Spoilers for Crazy Ex-Girlfriend Season 3, Episode 2 ahead.

In the show's latest episode, "To Josh, With Love," that dichotomy is on full display. Unsatisfied with Paula's plan to sue Josh for $600-$800 ("That's, like, a pair of shoes," she opines), she decides to turn to the worst person she knows — her callous boss slash onetime fling, Nathaniel — in search of a more dastardly scheme. She shows up to his apartment to make a deal (sex, in exchange for a crash course in being bad), he obliges, and they embark on a plot to ruin Josh Chan's life: a disastrous, harebrained, 50 Shades of Grey-esque ploy that includes a decidedly unromantic helicopter ride, a masquerade ball, and a not-so-subtle hat tip to the Taylor Swift/ Zayn collab that soundtracks the film's trailer.

But the next morning, when Nathaniel informs Rebecca that his grand plan was to go after Josh's family, the fantasy yet again comes crashing to a halt, and she calls the whole thing off, making clear that — whether she consciously realizes it or not — actually ruining Josh's life isn't who Rebecca is. This is, after all, the woman whose idea of revenge was mailing him a box of cupcakes made of poo, and even that was an utter failure. Rebecca certainly has her flaws, but she's not malicious at heart, so it's unsurprising that she's so spectacularly bad at being a femme fatale.

All she knows is that she's hurting, and for now, making Josh feel that same pain is the only way she can think to numb it, even if she knows, deep down, that it won't ever work. It doesn't matter if she's chasing after him because of misdirected love or manic hatred, Josh has and always will be little more than a way to distract her from the depression and anxiety that brought her to West Covina in the first place. Rather than face her problems, she buries them in her caricature of the week, putting her focus on being anyone but herself in the hopes that one of them will finally make her happy. But no matter how many personas she tries on, the real Rebecca — outspoken, headstrong, and yes, a little erratic — inevitably peeks through.

In this episode, for example, she throws herself into a whirl of rom-com clichés, but, Rebecca being Rebecca, she can't help from commenting on how unsexy and impractical they actually are. She complains about how uncomfortable her thong is; rolls her eyes at Nathaniel's inability to pick out clothing real women can actually wear (the dress he bought was sized for a 13-year-old, the lingerie had laughably inexistent support); and after pulling off a particularly seductive come-on, immediately confesses she borrowed it from Cruel Intentions. It's fittingly meta: In trying to be "sexy," Rebecca turns to exactly the sort of unrealistic stereotypes the show is parodying.

But, as "To Josh, With Love" makes clear, the more performances Rebecca puts on, the less satisfying they become, and at this point, they're no longer enough: She tracks down Josh and impulsively confesses to everything he (inadvertently) drove her to do, finally un-bottling all the lies she's been frantically holding in. It's impossible to say where a show as unpredictable as Crazy Ex is headed next, but as Rebecca is pushed further and further into the deep end, reality, it seems, is closing in, and eventually, there won't be anywhere left to run — even from herself.