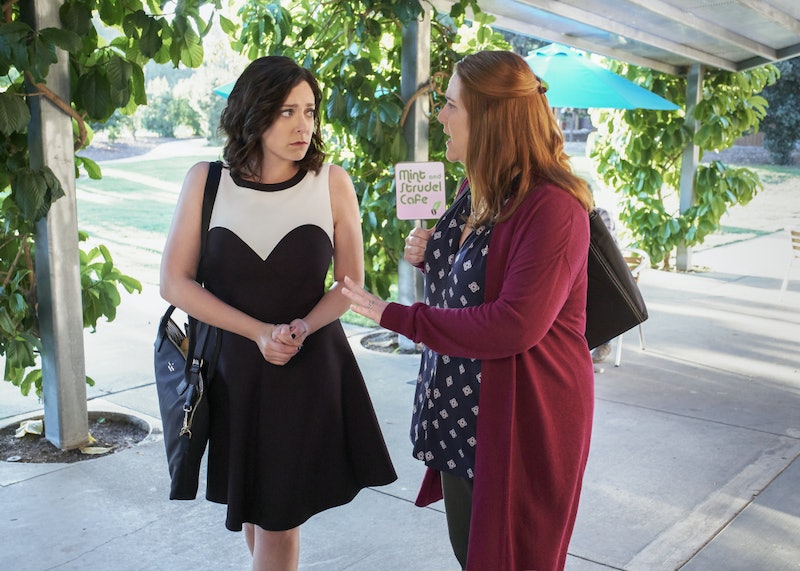 When Rebecca Bunch rolled into West Covina in Season 1 of Crazy Ex-Girlfriend, she was the most interesting thing to hit town in a while. Yet by Season 3, the people in Rebecca's California life should probably be less crazy about her. Nonetheless, Rebecca's friends enable her on Crazy Ex-Girlfriend. And although viewers of the show totally get why it's so fun to be a ticket holder to the wild show that is Rebecca Bunch, the Oct. 27 episode "Josh Is A Liar" makes it so incredibly hard to understand how she still has such supportive — and enabling — friends. Spoilers for Crazy Ex-Girlfriend Season 3, Episode 3 ahead.

As a competent and intelligent woman, Rebecca is the person who is responsible for her own mental health. As she has ditched her medications, not taken her therapy sessions seriously, and consistently embarks on self-destructive behavior, it's clear that getting healthier is not a real priority for her. And her new friends in West Covina — Paula, Heather, Darryl, and Valencia — are not to blame for that. However, even though they don't know the ins and outs of Rebecca's complicated psyche (heck, who does?), they continue to allow Rebecca to take advantage of them all while enabling her.

In the Season 3 premiere, "Josh's Ex-Girlfriend Wants Revenge," Paula actually made strides in decreasing her enabler status. Sure, she allowed Rebecca's fake porn revenge idea with a Josh Chan body double to go on for a bit too long. But she eventually stopped the madness and found a revenge solution against Josh that wouldn't damage Rebecca in the process. The lawsuit against Josh seemed like a solid plan — that is, until Rebecca reminded viewers just how little of a case she had against her ex-fiancé when she confessed everything to him in the fantastic musical number, "After Everything You Made Me Do."

In order to stop Josh from telling everyone about all the ways she has deceived him, Rebecca does some self-serving damage control with an assist from her younger self in "Josh Is A Liar." Part of that damage control includes stopping Paula from filing the lawsuit against Josh. And rather than tell her best friend the truth about the situation — after all, Paula pretty much knows almost everything Rebecca did to Josh anyway — Rebecca lies and tells Paula her legal work is amateurish and that they need to drop the case because it's not strong enough.

Rebecca deliberately preys on one of Paula's biggest insecurities by questioning her ability as a budding lawyer. She belittles Paula with the full knowledge that this will damage Paula's self-confidence so badly that she will no longer pursue the case against Josh. It's a low blow even for Rebecca, who is 99 percent of the time too self-absorbed to be a truly good friend. Rebecca is also too consumed by saving face and ruining Josh's reputation to listen to Heather, who has a life crisis now that she is finally graduating from college.

By the end of the episode, Paula, Heather, Darryl (whom Rebecca oftentimes doesn't give the time of day to), and Valencia (whose relationship with Josh was destroyed by Rebecca) confront her about Robert (who is not a dog). However, this intervention seems to come from a place of caring and concern about Rebecca's past arson and time in a psychiatric hospital. This is a good thing for Rebecca, who needs all of the emotional support she can get right now, but has Rebecca's behavior earned such steadfast friends?

Rebecca has made it clear time and time again that it's Rebecca Bunch's world and her friends are just living in it. And her friends fuel her narcissism by rarely checking her on that. Yes, they try to sometimes, but never enough for Rebecca to really get the message. Beyond that, they still give her the benefit of the doubt, even when she tells blatant lies, like she does in "Josh Is A Liar." While Darryl is blissfully naïve and always will be, Paula at least should know that Rebecca is lying to cover something up. Paula may say, "It's like we never really knew her" after she learns about Robert, but Paula does know Rebecca — very well, in fact. She knows Rebecca in all of her fascinating, clever, funny, and (here's the key) manipulative glory. So, as much as she admires and loves Rebecca, she needs to be holding her BFF accountable more.

Rebecca's friends obviously have their own mental health issues that make them the perfect accomplices for Rebecca's schemes. But after, "Josh Is A Liar," Crazy Ex-Girlfriend should explore exactly why they keep enabling Rebecca — and have them stop it. Because even though friends are a relatively new concept to Rebecca, Paula and the gang should know better.

Any changes to their behavior (and thus, Rebecca's) will have to wait a few episodes though since Rebecca is going to need her friends by her side as she deals with the Robert information going public. But for their own good, Paula, Heather, Valencia, and Darryl should help Rebecca become a better friend to them. It will be no easy feat, especially with the current setback, but it will make them all healthier — and frankly, less crazy — in the long run.