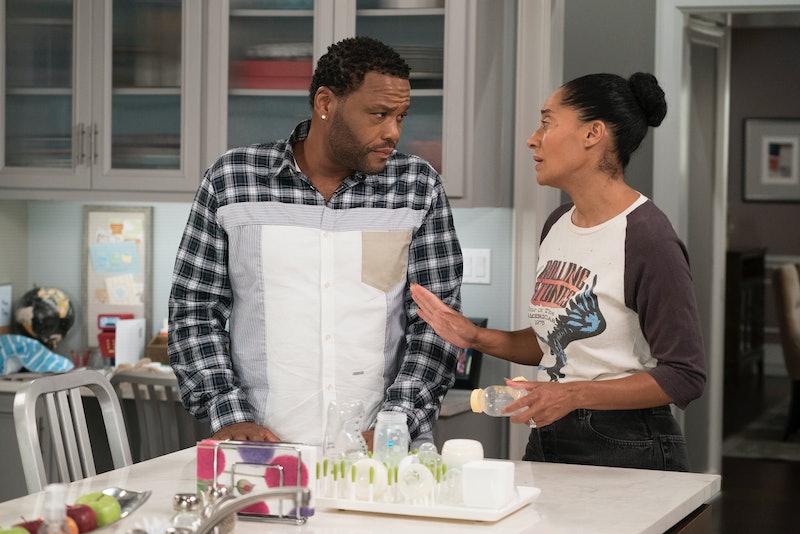 The most recent season finale of black-ish aired back in May of 2017, but the series is finally returning for a fourth season on Oct. 3. And if in the intervening months, you've perhaps forgotten where we left the Johnson family, this black-ish Season 3 recap should help remind you why this series is considered one of the best comedies on television and has racked up tons of nominations, awards, and great reviews over its first three years. Throughout Season 3, the series took a small serialized step forward while also remaining true to its roots as a half-hour family sitcom that resets at the end of each episode for another adventure. The Johnsons grew emotionally in their last set of episodes, but they also added to brood.

black-ish is holding strong to its position between the two extremes of TV comedy right now — one that tends more to psychological introspection, like Master of None or BoJack Horsman, and another, whose first priority is to make you laugh. Along with other family sitcoms like Fresh Off the Boat and Speechless, black-ish is a part of a great little niche of network comedies that are hilariously funny, fit for parents and kids, and also have a message behind him.

That being said, here's what you need to know about the Johnsons before black-ish returns for Season 4:

The most noticeable change that happened in black-ish Season 3 was Rainbow's pregnancy and the birth of baby DeVante. The family wondered whether they'd have a boy or a girl, and about the gendered expectations for each. Dre made a case for their son to have a recognizably "black" name and for the value of not assimilating to white cultural expectations in "The Name Game." And some slight complications with the pregnancy made the whole family realize that a healthy baby and mother, not a big co-ed party, is the important thing, in the season finale, "Sprinkles."

Bow reacted to her pregnancy by wondering whether or not she should take maternity leave or fight for a promotion. Dre initially wondered whether or not it's fittingly "manly" to be a stay-at-home dad in "Manternity," and eventually realized that taking more time to bond with his kids wouldn't necessarily be a bad thing.

Zoey was once a ditzy and entitled teenager, but in Season 3 she really grew up. She found a local college she's ready to attend in an episode that served as a backdoorpilot for Grown-ish, a spinoff set to premiere on Freeform in 2018. Throughout the season, Zoey tested the boundaries of her role in the family, by admitting that she doesn't believe in a god, and by getting her first internship at Teen Vogue thanks to "Nothing But Nepotism." Zoey also matured as she realized she didn't want to miss out on baby DeVonte's entire childhood by moving to the east coast.

This season also added some guest stars — and the one way black-ish loves to introduce those guest stars is as members of the Johnson extended family. So, in "Sister, Sister," Rashida Jones guest-starred as Bow's younger sister, a wannabe-Real Housewife whose seemingly shallow pursuits disguised a caring heart. And Lorraine Toussaint played Pops' sister in "Auntsgiving," where she rekindled a friendship with Ruby after they realized a two-timing man was at the heart of their longtime feud.

Dre Got Even More In Touch With His Feelings

Dre always grows and changes the most over the course of any given season, because of his past growing up in Compton (his reaction to being the one who "made it" out of that neighborhood was the subject of "I'm A Survivor"). Dre attempted therapy in "Good Dre Hunting," realizing that his usual coping mechanism of eating his feelings was inadequate. He also had his own journey to accept his first child leaving the nest. And as always, the character helped show audiences the complicated algebra black men are forced to go through daily in order to avoid being seen as a threat in "Who's Afraid of the Big Black Man?"

Bow Got A Little Spotlight

The second season should have had more Bow-focused episodes, but thankfully the third stepped up, giving Bow her very first episode-framing voiceover in "Being Bow-Racial," which marked the first time Bow's identity was more than just the occasional punchline.

The Election Was A Big Issue

The show always addresses political and social movements in this country, and the 2016 election was a big moment for many reasons. After an early attempt to poke fun at the election and black voting habits in "40 Acres and a Vote" — where Junior wears a women's pantsuit in order to help him win his high school student council presidency — the series revisited the subject more seriously in "LEMONS."

Overall, the third season of black-ish experimented slightly with some serialized changes, deepened some of its characters, especially Bow and Zoey, and added a new Johnson to the family. And the always-solid jokes and thought-provoking moments make black-ish Season 4 one of the must-see series of the fall, as it has been for the past few years.

More like this
Andrew Gray Returned To 'Bling Empire' In Season 3 To Make Amends
By Brad Witter
Who’s The Richest 'Grey’s Anatomy' Star? See The Net Worth Of Each Cast Member
By Hugh McIntyre
'The White Lotus' Season 2 Trailer Teases Multiple Affairs & Another Dead Body
By Bustle Editors
Dan Levy Appears In The Latest Teaser For The Weeknd's HBO Series, 'The Idol'
By Jake Viswanath
Get Even More From Bustle — Sign Up For The Newsletter