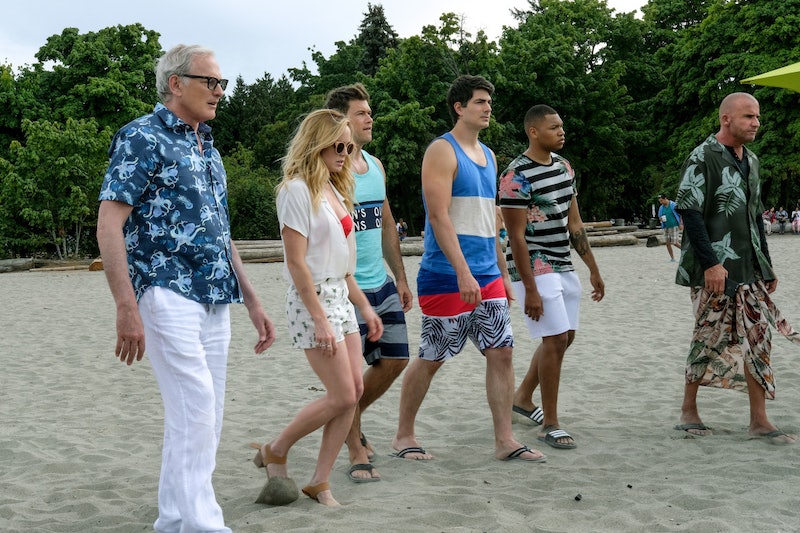 The Legends Of Tomorrow need their Waverider to get to the past, but you won't need their time-traveling ship to get you up to speed. This Legends Of Tomorrow Season 2 recap will cover all the important happenings in the DC show, just in time for the Season 3 premiere on Oct. 10. Be advised, being a recap, there are of course spoilers ahead.

If Season 1 of DC’s Legends Of Tomorrow was about stopping Vandal Savage, then Season 2 was all about fixing abnormalities of the past with the Time Masters, now gone. Unfortunately, for the Legends, that was true as much in the first episode of Season 2, as it was in the last episode.

What good is a team of heroes without a team of villains to stop them though? The Legends will be facing off a number of different foes in their third season, including a number of them who'd made appearances in the first two seasons. And those foes have included the man who formed their team in the first place: Rip Hunter. He has reformed the Time Masters now, as the Time Bureau and ultimately, it seems they and the Legends may butt heads as to how to appropriately “fix” and protect time.

Hunter may ultimately be a minor concern however, when looking at the confirmed roster of villains appearing next season. Darhk, Captain Cold, Gorilla Grodd, and Kuasa are all set to show up. It is unclear as to who will be the leader, and if they will be working together like Darhk did with the Legion of Doom last season. Here's everything else you may have missed:

More like this
Everything You Need To Remember Before ‘The Handmaid’s Tale’ Season 5
By Grace Wehniainen
Nicola Coughlan Shared A Lady Whistledown Excerpt From ‘Bridgerton’ Season 3
By Grace Wehniainen, Alyssa Lapid and Sam Ramsden
A New 'And Just Like That' Table Read Pic Confirms A Key Character's Return
By Jack Irvin and Grace Wehniainen
You’ll Definitely Recognise Both Of Ty Tennant’s Parents
By Maxine Harrison
Get Even More From Bustle — Sign Up For The Newsletter