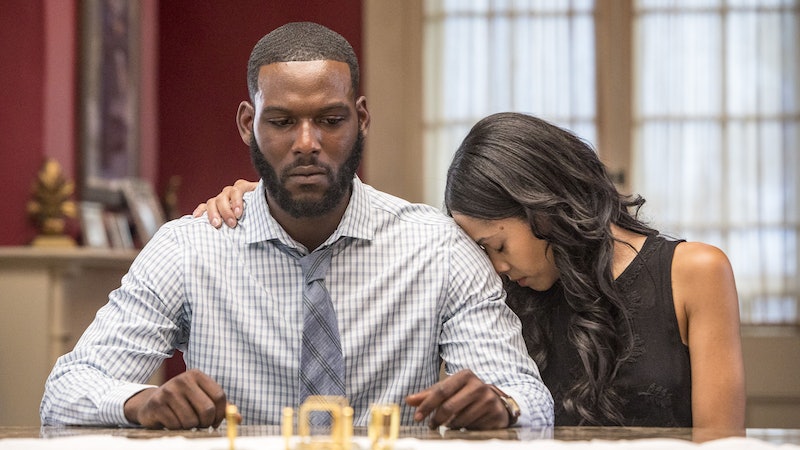 Few shows on television today can touch viewers the way OWN’s Queen Sugar does. In addition to creator Ava DuVernay's commitment to increasing behind-the-camera diversity with all-female directors, the hit contemporary drama series beautifully captures the love between three siblings in rural Louisiana. Additionally the show, based on the novel by Natalie Baszile, does a tremendously good job at exploring real-life issues with grit and grace. If you're not sure where your favorite characters ended up in the midseason finale, this Queen Sugar Season 2 recap will catch you up before the show's two-night mid-season premiere begins on Tuesday, Oct. 3.

In the first half of the show’s second season Nova, Charley and Ralph Angel struggled to move on with their lives while also honoring their father's legacy through the farm. Not only did the bond between the Bordelon siblings deepen, but fans also saw a shift in their family hierarchy when heart-wrenching secrets were revealed. New romances were introduced, while old flames fizzled out and life on the Bordelon farm won't be the same moving forward. The mid-season premiere is sure to pack a serious punch and if it’s anything like previous premieres, fans will most definitely need tissues.

But before you see where the Bordelons are going next, here's a recap of everything that already went down in Season 2.

Micah has been pretty messed up ever since his father's scandal came to light in Season 1 and moving to Louisiana permanently sure didn't make things easier. Once he started adjusting to life in the South and making new friends at school, fans expected everything to get better. But of course, there has to be more darkness before the dawn. At the top of Season 2, the newly minted 16-year-old cruised down the highway in a sports car gifted to him by his father. Seems pretty harmless being that he wasn't speeding or anything. But alas, he got pulled over. The older white cop began questioning if it was really Micah's car and after an uncomfortable few minutes, Micah was unjustifiably arrested. For the rest of the season he remained isolated, stopped eating, skipped school, shuddered around cops, and even pushed down his little cousin Blue who innocently grabbed him from behind.

Finally forced to recount what happened the day of his arrest, Micah broke down in his father's arms. When he was handcuffed and put in the back of the police car, the officer decided to “go for a drive,” passing the police station as Micah’s fear of what would happen next heightened. The officer belittled Micah, saying the he couldn't stand “fancy-talking n*****s,” before stopping in a dark alleyway. If fans weren't crying already, the moment Micah described next took the cake. The officer repeatedly said, “I’m going to take that spoon out of your mouth and put something else in it.” Unfortunately, that something else was a gun — and the officer added insult to injury by pulling the trigger in an attempt to scare Micah.

Queen Sugar Mill was officially opened for business in the first half of Season 2. Unfortunately, things didn’t quite go off without a hitch. Charley is no stranger to putting up a facade and pretending everything’s alright, but during the mill's opening ceremonies a sugarcane machine malfunction sent her spiraling out of control. Although, her breakdown had absolutely nothing to do with the machine. She tearfully confessed to Nova that she regretted not coming home from L.A. as soon as she got the call that their father was dying. Since she didn't get to say goodbye, getting the farm and mill back up and running was her way of honoring him. Nova reminded her that none of the Bordelon children were perfect, and encouraged Charley to let herself off the hook.

But, almost as quickly as one fire in Charley's life got put out, another one started blazing. Her breakdown was was witnessed by a nosey reporter who wasn't buying her whole "honoring my father's legacy" story. He wanted something more real and threatened to write about her crying spell if she didn't give him something good. So, Charley did what any woman in this situation would do: she promised the reporter an off-the-record-for-now exclusive about how she’s divorcing Davis. Additionally, Charley finally confessed her true feelings to Remy after months of going back in forth on her feelings for Davis. Though, something tells me this newfound romance will be put on the back burner when Charley finds out what really happened to her son Micah.

Nova Gets A New Love Interest

In Season 1, Nova was mostly a peace keeper and a soundboard for anyone who had problems, whether it be her siblings or members of the community. But in Season 2 fans saw her peaceful nature get swept away as she dealt with the fall out of her relationship with married man Calvin, a new editor at work questioning her writing skills and her never-ending family drama. Luckily a new man came into the picture giving Nova a second chance at happiness. While at a symposium in Atlanta she was introduced to Dr. Robert DuBois, a smart and charming epidemiologist. When he and Nova first locked eyes the chemistry was undeniable. Nonetheless their budding relationship hit some bumps especially when a hellish dinner with Robert's elitist and racist “friends” brought their differing views on how to really help Black people in modern America to light. Sulking from the disagreement Nova returned home where Aunt Violet advised Nova to stop always running when things get tough. Nova took in the criticism like a champ and like clockwork Robert showed up to her door to apologize. Where there relationship goes from here is to be determined...

If there's anyone who knows how to stir up drama in the Bordelon family, it's Ralph Angel, and this season was no different. At the end of Season 1 he found a hidden letter from his father naming Ralph Angel the true and sole owner of the family farm. Aunt Violet begged Ralph Angel to keep the news to himself and while he did initially, Ralph Angel quickly got tired of being ignored and passed over by Charley when it came to farm decisions. After a tearful chat with his son Blue about lying, Ralph Angel decided to come clean at a family dinner. Of course, his sisters didn't take the news well and harshly questioned his ability to raise a child or run a farm.

Things became especially heated between Charley and Ralph Angel, as Charley's own money is what got the farm up and running and she won't give it up without a fight. Fortunately, all was resolved (for now) when Charley and Ralph Angel both attended Darla's two-year sobriety celebration, and Charley promised to always be there for him. Later, Charley wasn't the only person Ralph Angel realized he needed in his life. In the mid-season finale over a candlelit dinner he confessed that he could no longer live without Blue's mom Darla and proposed.

Aunt Violet’s Health Took a Turn For the Worse

Aunt Violet has been the glue that’s held the Bordelon family together for years. Even when her own relationship with Hollywood began to crumble, Vi managed to balance her work at the High Yellow diner with diffusing the growing drama between her nieces and nephew. This is why it was especially devastating for fans to watch her health begin to decline. Right on the brink of her starting a pie-baking business, thinning hair, and sudden fainting all signal that things are headed south physically for the makeshift matriarch in the second half of Season 2.

How will Micah recover from his arrest? What's going to happen when Charley and Davis' divorce goes public? Will Nova and Robert make it? Is Aunt Violet about to die? Those questions will only begin to be answered in the two-part midseason premiere, and even more will definitely be raised.