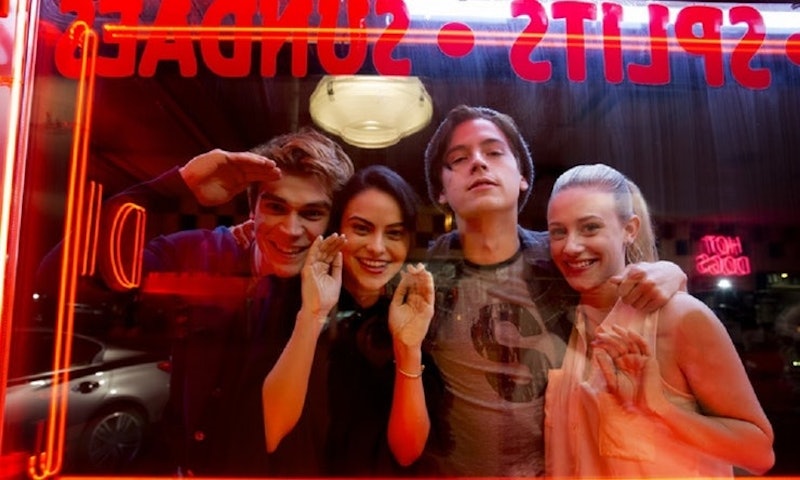 With a season finale that aired back in May, it's been a long five months since fans have gotten to catch up with Betty, Veronica, Jughead, and Archie. You might have forgotten what happened in Riverdale Season 1, it's been so long. This recap of the show's first season will catch you up on the twisty plot, because you know, just about everything that can happen in a teen drama set in an idyllic town that's actually super shady under the surface happened in the CW series. So much happened in just 13 episodes, so there's no shame in needing a refresher.

Last January, Riverdale began by reintroducing us to the characters from the classic Archie comics, but with a dark twist. The first season was framed around the mystery of who killed Jason Blossom, intertwined with a lot of other storylines that somehow all connected to each other. In the beginning, Veronica was only just arriving to Riverdale after her father, Hiram Lodge, was imprisoned; Betty was in love with an oblivious Archie (who mostly only cared about his budding career in music); and Jughead was an outcast narrator, observing and analyzing the nastiness simmering under the town's surface.

By the end of the season, so much had changed, and every character had gone on a journey. So here's everything you need to know about Riverdale Season 1. All signs point to Season 2 being worth the wait.

Veronica Had A Lot To Deal With

As a newbie to Riverdale High, Veronica has to deal with being a new kid, and the reality of her beloved father being locked up, as well as slowly figuring out that he might not be the man she thought he was. She instantly make friends with Betty, their relationship developing quickly after they team up to put a stop to Chuck Clayton's slut-shaming. By the end of the season, Veronica is dating Archie and trying to figure out what her life will be like now that her dad is coming home.

The Ms. Grundy Drama Was Real

Archie's big secret at the beginning of the season was the fact that he was having an affair with his music teacher, Ms. Grundy... who was shady from the get-go. At first, Archie thinks they heard the gunshot that killed Jason, but it turned out to be the Adventure Scouts instead. Eventually, the fact that she and Archie were seeing each other comes to light, and Betty, Veronica, and Archie discover that her real name is actually Jennifer Gibson and she escaped an abusive relationship and changed her identity. She leaves town when Alice threatens to expose her, and she's never heard from again.

Jughead & His Father Are Seriously Struggling

Jughead's world is turned upside down when the drive-in where he works (and sometimes lives) closes, and things only get worse once he discovers his father, FP, is actually the leader of the Southside Serpents. Later, he finds out that FP was arrested and then fired for stealing money from the business he shared with Archie's dad, Fred. Eventually, FP gets arrested when police suspect him of murdering Jason.

In Jughead's personal life outside of his family? Well, his relationship with Betty is basically the cutest thing ever, his beanie is the best, and he really, really hates birthday parties.

Betty's Sister, Polly, Has Been Through A Lot

Although she's MIA for the first few episodes, after a little detective work, Betty and Jughead end up tracking Polly down at a home for wayward teens. Yep, Polly's seven months pregnant with Jason's baby — and they were engaged. She escapes the home and goes to live with the Blossoms for awhile in hopes of finding out who killed Jason from the inside, but later, Polly and Alice find out that their dad, Hal, tried to get her to get an abortion.

And the biggest bombshell of them all? The Coopers are actually Blossoms by blood, which means that Jason and Polly's relationship was incestuous. Needless to say, the Blossoms lose it and Polly moves back home with her family.

The Truth About Jason's Death Finally Comes Out

Because the Riverdale PD is all but useless, Betty, Veronica, Archie, and Jughead team up to try to find out who really killed Jason so they can clear FP's name. Kevin's boyfriend (and Serpent member), Joaquin, leads them to a guy FP was working with, only to find him dead. They find a USB drive in Jason's Varsity jacket, and on the drive is a video of his death, revealing that his father, Clifford Blossom, shot Jason to keep him from revealing that Clifford was involved in selling drugs. And when the police finally go to arrest Clifford, they find out that he hanged himself before they got there. Yes, that's just as horrifying as it sounds.

How It All Ends

In the season finale, everything hits the fan — including but not limited to Polly finding out that she has an older brother who Hal forced Alice to give up for adoption. FP is still in jail, so Jughead is placed with a foster family and starts going to Southside High. Jughead is offered a Serpents jacket of his own as the gang offers to protect him while his father is in jail. Knowing what her father has done, Cheryl tries to drown herself, but Archie saves her. So instead, she does the next logical thing: sets her family's mansion on fire.

And at the very end of the episode, fans are left with a major cliffhanger. When a gunman tries to rob Pop's, Fred attempts to stop him and ends up getting shot himself. When the season ends, we have no idea whether or not Fred lives or dies.

With an epic season finale like that one, there's no way the Season 2 premiere won't be amazing. Here's hoping a lot of the questions Season 1 left us with will finally be answered... and that there will be plenty more Jughead and Betty where Season 1 came from.