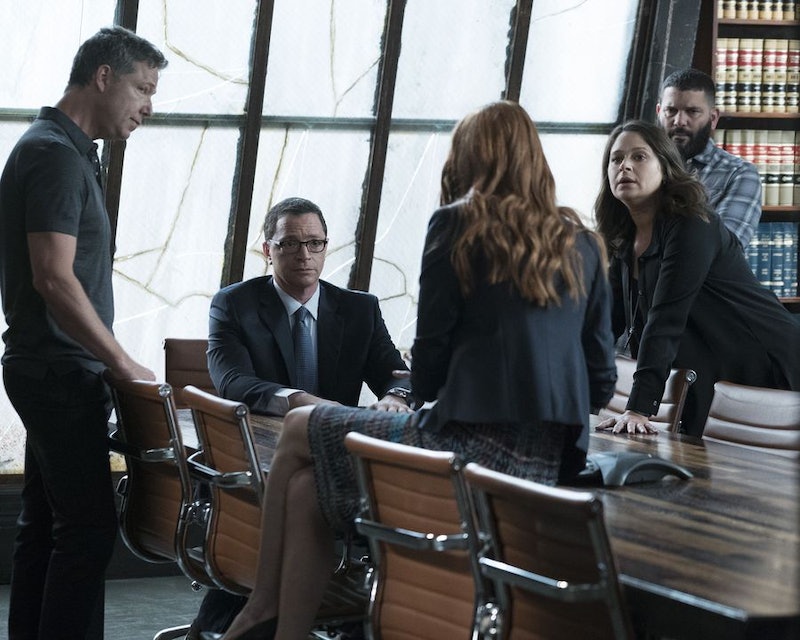 After more than six years of watching Olivia Pope don her white hat, Thursday is the beginning of the end. But before fans dive into Season 7, a Scandal Season 6 recap is necessary, because let's face it: A lot happened last season. It was 16 episodes jam-packed with so much political drama that it almost rivaled what's actually happening in the real Washington, D.C. these days. It's hard to keep it all straight.

With the aftermath of the presidential election, Frankie Vargas' assassination, and everything that happened in between, it was like every single episode of Season 6 packed a punch. Of course, some of those punches were a little over the top, but this is Scandal, and that's what has always kept fans coming back for more. It's impossible to think about saying goodbye to Olivia and her gladiators, but it's almost guaranteed that there's an awesome final season ahead — and after this, our beloved #TGIT nights will never be the same.

Here's everything you need to know before Season 7 kicks off on Thursday. Is anyone else super pumped to find out what the Shondaland version of life with the first female president is like?

However, he never actually got to be president, because he was killed during his victory speech... and that set off the plot for the rest of the season. At first, Cyrus was framed, but he wasn't guilty. Who was? Yeah, that isn't revealed until about a million episodes later, but let's just say that Cyrus was almost killed in his quest to prove his innocence.

There Was A Mystery Woman — & Man

Scandal is known for bringing out the scary side of humanity, and this group was the worst, specifically Samantha (or is it Grace?) and Peus. For a while, it was unclear what they were doing (or even what their names were), but then, their mission became obvious: They wanted to control the next presidency by whatever means necessary, including but not limited to murder and blackmail.

No one was shocked to find out that Rowan killed Frankie at the orders of Peus, but as it turns out, he was only trying to protect Olivia... since, you know, they were threatening to send him her head in a box. Normal.

A world without Huck on Scandal is a world that no fan ever wants to live in, so it's a good thing he survived, but things were pretty touch and go for a while there. You know that blackmailing duo that did all kinds of horrifying things this season? Huck's girlfriend, Meg, was actually working for them, and she shot him... a few times. Somehow, despite the fact that he looked like a sprinkler system and was locked into the trunk of a car that was dumped into a lake, he is still with us.

Yes, Maya is back... and unsurprisingly enough, she's the one Peus and Samantha were working for. She wanted to kill Mellie during her inauguration and made a solid attempt, but Rowan shot her before she had the chance.

After it was determined that Mellie Grant would be the next president, it quickly became obvious that it wouldn't be easy. She was confronted by Samantha, demanding to be her Chief of Staff, which would effectively allow her to run the entire country. To show how serious she was, she actually killed Elizabeth North with a golf club.

After faking a possible drone bomb flying over the White House (thanks, Huck), they were able to keep Samantha in a bunker while Olivia and Mellie took back the administration. Mellie took the opportunity to announce that Olivia would be her Chief of Staff, and Luna Vargas — Frankie's widow — would be her vice president.

Speaking of Luna Vargas? She wasn't just a grieving widow. In fact, Cyrus put the idea in her head that Frankie needed to die, so that she'd be able to use her newfound power to pass legislation. As soon as Olivia found out about that, she and Jake convinced Luna to commit suicide.

The Season Ended With A Transfer Of Power

As expected, Fitz left office to run his foundation, while Olivia handed over the keys to Pope & Associates to Quinn, since she'd be busy with her Chief of Staff duties, and Olivia took over Command. Plot twist!

With the way Season 6 left off, it's definitely going to be interesting to see what Season 7 has in store. You can't take Command, but you also can't take Olivia Pope... or can you?