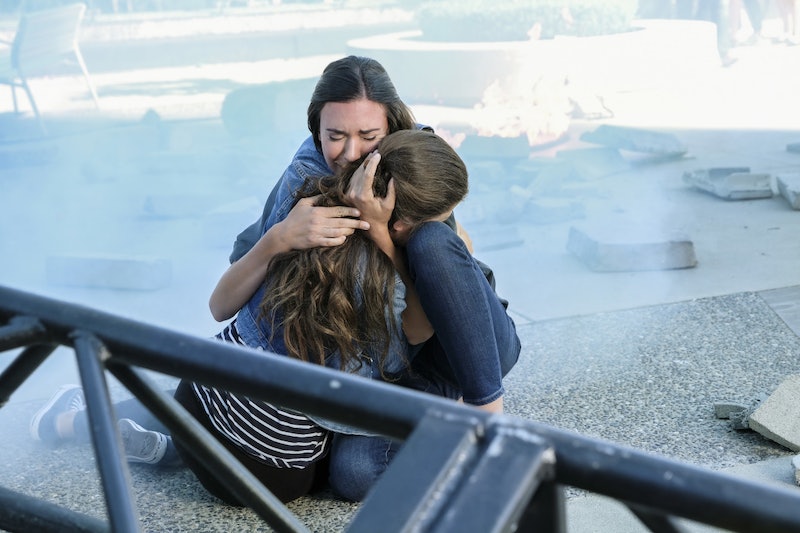 While Reign has yet to really make her television debut on Supergirl, fans may already know that she’s going to be this season’s big bad. (Thank you, pre-show press.) So, if you’re itching for Reign spoilers from the Supergirl comics to hint at what's ahead, I've got you covered.

In the comics, it’s known that Reign is one of a number of “Worldkillers,” living weapons bioengineered on Supergirl’s homeworld of Krypton, by none other than her own father Zor-El. The Worldkillers were then outlawed by the Kryptonian Science Council for being too dangerous, but survived the destruction of Krypton to awaken later, completely unsure of anything except their names. Lead by Reign, she and three other Worldkillers went about searching the galaxy for purpose, and when Reign found Earth with living Kryptonians on it, she figured that she would conquer the planet.

Before making her way to Earth, Reign found Supergirl and followed her to the remains of the Kryptonian city of Argo. The two battled and, surprisingly, the Girl of Steel was defeated. However, Kara didn’t know of the Worldkillers and couldn’t provide any information to Reign. Reign left Kara to go to Earth with the intention of still taking it over, but Supergirl recovered and followed her back home. Now with her other Worldkillers laying siege to New York City, Supergirl managed to secure a victory. Reign ordered a retreat to save her fighting force, although she promised to return for vengeance against Supergirl.

While ultimately defeated by Kara, it’s clear from their initial encounter that Reign has the ability to beat Supergirl — in large part, because of Reign’s array of superpowers. Besides having invulnerability, flight, and superhuman strength and speed, she also is lethal with her signature sword. However, since her introduction in Supergirl Volume 6 back in 2012, she has yet to reappear.

While the TV series has confirmed Reign to appear this season, there is nothing to suggest that the rest of the Worldkillers will join her. In an interview with Entertainment Weekly, Odette Annable (the actor who plays Samantha/Reign) was asked whether or not the rest of the Worldkillers will join her this season. Although she wasn’t particularly far along in the filming for Season 3 when asked, it was a no. But, she said she’d love to see them join her on the show. “Do I have a backup? No, that hasn’t come up,” she said. “So far, it’s just me, from what I know, but it would be cool if I was fighting and had this epic showdown and all of a sudden my buddies came along to play.”

Of course, there are already many differences with the way Reign will be depicted in the TV series versus the comics. That shouldn’t come as a surprise, though, since Supergirl has altered details about existing characters like Psi before. As for Reign, Variety reports that her costume will also be different than the comics. But, what is perhaps most unique about the television version of Reign is her alternate identity: Samantha Arias, the single working mother of one. In the comics, Regin never had a daughter, while on the show, Ruby is central to Samantha’s character.

Four episodes through the third season, Reign sure is taking her time to appear on Supergirl. So, when will fans see that iconic villain from the comics? Well, in an interview with Entertainment Weekly, Supergirl executive producer Andrew Kreinberg may have given a hint when he said that typically on superhero shows like this, “You meet [the big bad] at Episode 7 or 9.”

According to Spoiler TV, Episode 9 of this season will reportedly be titled, “Reign.” Clearly a reference to the titular super villain we’ve been discussing, it seems highly likely that Reign will finally appear in that episode. But, no matter when we see that grey scowling face, it will be a pivotal moment in the season. And, we'll just have to wait and see whether the comics prove to foreshadow an initial Supergirl defeat.

More like this
The 50 Most Powerful Characters In The Marvel Universe, Ranked
By Johnny Brayson and Nola Pfau
The New Grey's Anatomy Interns Have Fans Feeling So Nostalgic For Season 1
By Brad Witter
'The Rings Of Power' Episode 7 Will Feature An “Unlikely Pairing Of Characters”
By Grace Wehniainen
These Memes & Tweets About Alicent in 'House Of The Dragon' Prove She's The Queen Of Messiness
By Grace Wehniainen
Get Even More From Bustle — Sign Up For The Newsletter