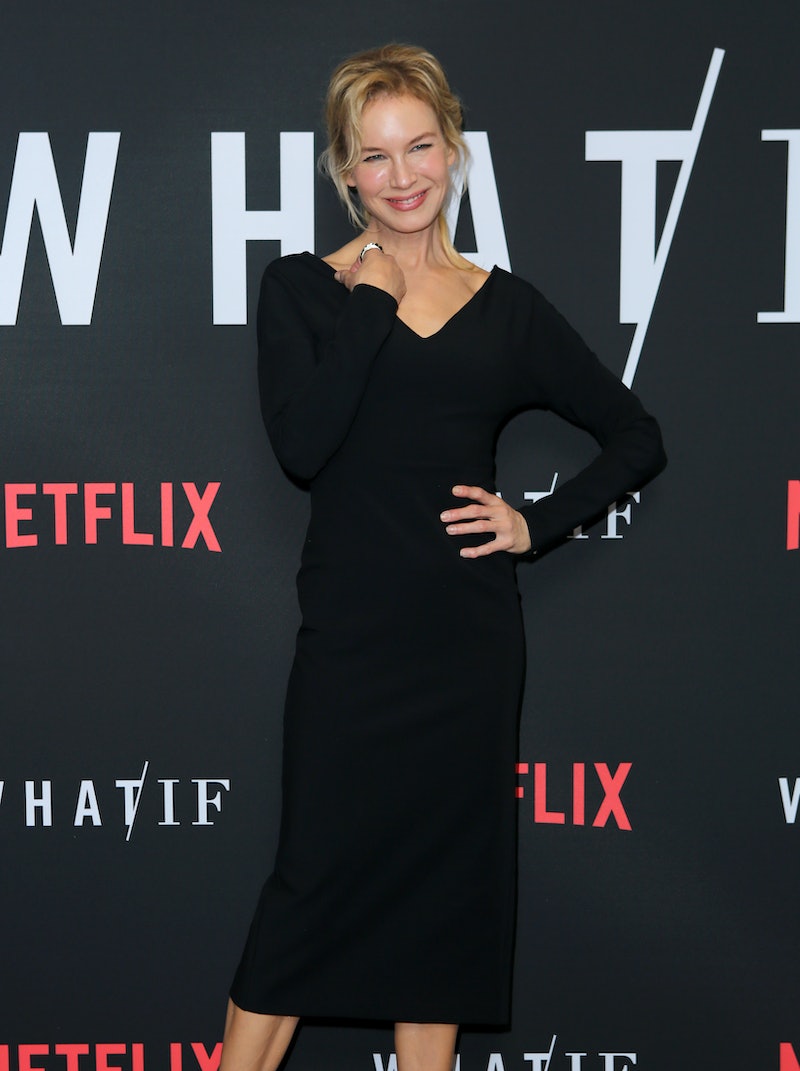 Get ready to pour a glass of your favorite chardonnay. During an interview on the Tuesday, May 21 episode of CBS' The Talk, Renee Zellweger said she'd reprise her Bridget Jones role, if given the opportunity. The actor, who originated the titular role on the big screen in 2001's Bridget Jones's Diary — and appeared again in 2004's Bridget Jones: The Edge of Reason, and the 2016 follow-up, Bridget Jones's Baby — even joked about where she thinks Bridget might be today.

When asked by co-host host Sheryl Underwood if she’d be up for a fourth movie, and, if so, where she would see her now, Zellweger joked, “Bridget Jones: The Menopause.”

In all seriousness, though, she added, “I know Helen’s [Fielding] written the book, and I love this character. So, I mean, if they call me, I’ll go running.”

It seems in all likelihood that Zellweger may get that call. British trade magazine, The Bookseller, reported that a film adaptation of Bridget Jones: Mad About the Boy, Fielding's 2013 book, is indeed, in the works. Per the publication, the author's agent, Clare Alexander of Aitken Alexander, confirmed they are in talks with production company Working Title about bringing a fourth installment of the popular rom-com to theaters.

Of course, this isn't the first time Zellweger has addressed the possibility of stepping back into character. Last January, Scottish newspaper The Daily Record asked the actor if fans could expect another film. Her response? “I really hope so. I do. I love her. She’s so much fun ... I really like the place she is at in her life, but it’s Bridget and there’s always going to be some drama. She’s so perfectly imperfect.”

After all, she was received with open arms when returning to the role in 2016, following a 12-year hiatus following the release of Bridget Jones: The Edge of Reason. “It was really special to see her so welcomed and loved after such a long time away because it can go either way," Zellweger added to The Daily Record. “This could have been the one I was finally found out on.”

In the meantime, she has plenty on her plate to keep fans entertained. On May 24, Netflix will debut her new 10-episode dramatic thriller What/If, in which she'll play a "mysterious investor" who makes a proposition to a couple (played by Jane Levy and Blake Jenner) in the vein of 1993's Indecent Proposal.

Then there's this fall's Judy Garland biopic, Judy. Jaws dropped when the Judy trailer dropped, showing Zellweger's amazing transformation into the movie icon. Set to Garland's The Wizard of Oz anthem, "Somewhere Over the Rainbow," the preview shows scenes from Garland's life and last performances, as she balances motherhood, her floundering career, and her struggles with substance abuse.

"It was such a joy learning about the magnificence of this person," Zellweger, who took music lessons and studied Garland's choreography, explained to People. "I always admired her. She was so quick and so funny. She could hit the ball back with the best of them."

With any luck, fans will soon see Zellweger step back into Bridget Jones' shoes too.