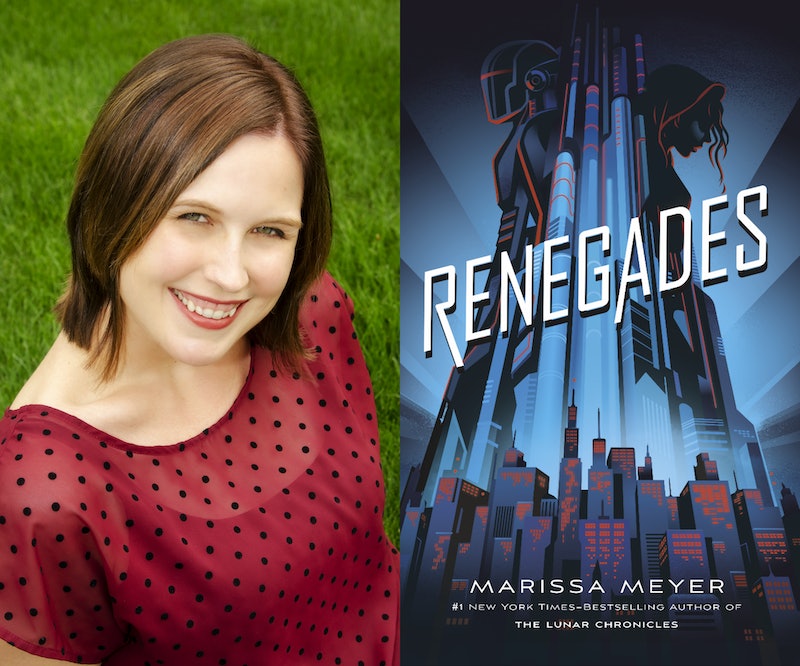 If you like YA sci-fi fantasy, chances are supremely high that you're also a Marissa Meyer fan. Meyer burst onto the scene in 2012 with Cinder, the first in her quartet of fairytale retellings, The Lunar Chronicles, and has since become one of the biggest, and most beloved, authors in the game. With The Lunar Chronicles and her Queen of Hearts standalone Heartless, Meyer has become synonymous with bad ass heroines, terrifying villains, and mythical worlds that tie-in classic fairytale stories with the futuresque settings. But with her latest release, Renegades, Meyer is turning toward a different, though equally remixed genre: superheroes.

"Superhero stories are something that I've loved since I was a kid, not unlike fairy tales, so even though this is a departure from the retelling genre, it felt like a natural transition for me to make," Meyer tells Bustle. "I loved how writing in this genre allowed me to draw on inspiration from so many of my favorite superhero stories, from X-Men to Sailor Moon, while still trying to create something that feels new and unique. And it pulled me back to my roots of writing Sailor Moon fanfiction when I was a teenager, too, which was a lot of fun!"

The book, which is the first in a new duology, follows The Renegades, who are a syndicate of prodigies — humans with extraordinary abilities — who emerged from the ruins of a crumbled society and established peace and order where chaos reigned. As champions of justice, they remain a symbol of hope and courage to everyone... except the villains they once overthrew. Nova has a reason to hate the Renegades, and she is on a mission for vengeance. As she gets closer to her target, she meets Adrian, a Renegade boy who believes in justice—and in Nova. But Nova's allegiance is to a villain who has the power to end them both.

Meyer is not the first author to find inspiration in superhero stories lately. In fact, superheroes are having a huge moment in 2017—not only on screen with blockbuster releases like Wonder Woman, but in books, too, especially in YA. From Jason Reynolds' Miles Morales to Rainbow Rowell's Runways and Gabby Rivera's America, young adult authors have been tackling these tales of heroism and villainy with vigor, and a whole lot of modernity.

"Superheroes are one of those things that never go out of style, and I personally think it has a lot to do with the vicarious nature of superhero stories," Meyer says. "Obviously, there is a huge appeal in the very idea of having extraordinary powers. Who doesn't want to be able to fly, or control the weather with our minds, or have super-strength? It's an irresistible fantasy. But I think it goes beyond that, too, to a very human desire to be gifted with the ability to change the world for the better. To help the weak, to seek justice, to see evil punished once and for all."

Refreshingly, too, not only has the superhero trend in YA been one of modern ideals and appealing plots, its been one that has championed diversity in every respect. And whereas superhero films are still catching up, YA readers are fully on board with Reynolds' black Spiderman, April Daniels' transgender crime fighter in Dreadnought, and Rivera's queer Latinx teenage Miss America. And Renegades can count itself among the diverse many; reps for different genders, races, and sexual orientations fit seemlessly into Meyer's world.

"But I think it goes beyond that, too, to a very human desire to be gifted with the ability to change the world for the better. To help the weak, to seek justice, to see evil punished once and for all."

"Diversity has always been important to me, though I wasn't as self-aware when I first started writing The Lunar Chronicles to be able to put into words why it's important. A lot of it comes down to authenticity — our world is full of unique, interesting individuals, of people who come from so many different backgrounds, cultures, and ethnicities," Meyer says. "To write a book in which everyone looks the same or comes from the same background would read false to me… and also boring! I want my books to feel as richly populated as the real world is, and I want readers to be able to connect with these characters and hopefully feel like there is at least one character they can relate to. We all should have the opportunity to be superheroes."

Another compelling aspect of Renegades is the exploration of that thin line between good and evil—and it's a place Meyer has gone before. In fact, it has become something of a hallmark in her work; creating characters, both heroic and decidedly not, who are neither one or the other. Just quickly running through some of her most beloved characters (even The Lunar Chronicles' Queen Levana, one of the scariest villains in YA) proves that Meyer has no interest in one dimensional docile heroines, wicked witches and white knights.

"I want my books to feel as richly populated as the real world is, and I want readers to be able to connect with these characters and hopefully feel like there is at least one character they can relate to. We all should have the opportunity to be superheroes."

"It really is a theme that I find myself drawn to over and over, but honestly, I'm not sure why I find it so compelling! Maybe because I've always found characters who were 'all good' or 'all evil' to be painfully dull," Meyer says. "The gray areas intrigue me. Does the end justify the means? Isn't 'justice' just another way of saying 'revenge'? Is a good deed motivated by personal gain still a good deed? I'm just so interested in that, and the way people think, and the reasons we act, and how our actions are interpreted as good or bad depending on any number of factors. So I guess I keep writing about it to see if I can answer any of my own questions, but I'm not sure I ever do!"

One question we don't need answered, though, is whether Meyer is as good as ever with Renegades; it's a fully realized new world with compelling characters and just enough edge-of-your-seat action to rival the biggest on-screen adaptations.

"Writing Renegades has been a very winding path. Never before has a book so challenged me in figuring out what the story was meant to be," Meyer says. "In the end, I'm so happy that it finally feels like I figured it out and was able to determine the right structure to tell Adrian and Nova's story. I hope that readers will fall in love not only with the two protagonists, but with all of the peripheral characters, too, who I had so much fun creating and writing."

More like this
This Episode 6 Moment Foreshadows Viserys' Fate On 'House Of The Dragon'
By Grace Wehniainen
Nicola Coughlan Shared A Lady Whistledown Excerpt From ‘Bridgerton’ Season 3
By Grace Wehniainen, Alyssa Lapid and Sam Ramsden
Alan Rickman's Diary Reveals Why He Considered Leaving 'Harry Potter'
By Darshita Goyal
The Most Anticipated Books Of October 2022
By K.W. Colyard
Get Even More From Bustle — Sign Up For The Newsletter