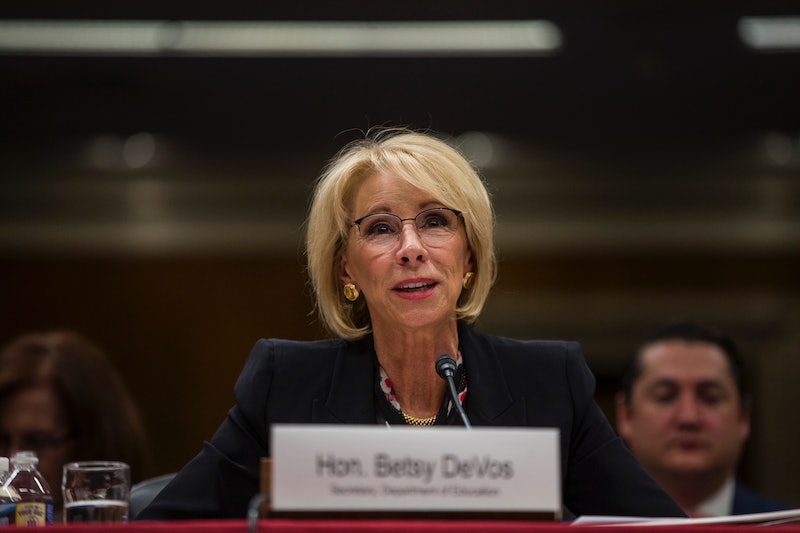 Last week was rather a rough one for the education secretary what with the president's about face on Special Olympics funding — and it doesn't appear as if this week is off to a better start. Democratic Rep. Katherine Clark said Betsy DeVos should resign, claiming Monday that the education secretary had failed in her basic responsibilities and "cherry-picked racist research" to support her policy decisions.

"I am calling for her resignation because she has failed to live up to her basic job responsibilities: making sure that our kids have fair and equitable access to a great public education and to keep them safe," Clark said Monday during an appearance on MSNBC's Morning Joe.

The Massachusetts representative went on to accuse DeVos of failing to "stick up for children" when she revoked an Obama-era policy in December that was aimed at eliminating racial disparities from how children are disciplined at school. "What Betsy DeVos did that so object to and find disgusting is she rescinded civil rights policy and cherry-picked racist research to back it up," Clark said. "What she did was roll back Obama-era protections for children of color who we know are disciplined at far greater rates than their white peers."

Clark argued that DeVos' "fundamental failure to stick up for children as secretary as education makes her unfit to carry on this job."

According to U.S. News & World Report, Clark took issue with DeVos citing portions of a 2014 paper that argued discrepancies in the discipline of white and minority students likely stemmed from pre-existing behavioral problems brought into the classroom by students. "Black children are just plain old more disruptive in the classroom — How did you come to that conclusion?" C-SPAN reported Clark had said to DeVos during a congressional hearing earlier this month.

"That's the research that you are citing in your report in concluding that, apparently, it is not racial discrimination in discipline, but there are some characteristics of black children that, from this report, start early in life – well before they get to the classroom," Clark continued. "And, in fact, the author of the report has many other writings where he says that it is the liberal fantasy that poverty and racism play into high rates of incarceration and criminal behavior."

In a statement provided to Bustle, Department of Education Press Secretary Liz Hill dismissed Clark's call for DeVos to resign as "political opportunism" and an attempt to put herself in the day's headlines. "The Secretary rescinded this guidance months ago because she heard repeatedly that it wasn't working for students or for teachers," Hill tells Bustle. "For the Congresswoman to show up today and try to grab headlines is nothing more than political opportunism at its worst."

Hill maintained that, "Secretary DeVos always has and always will fight to make sure every student is treated like an individual and has the opportunity to learn and grow in an environment that is safe and nurturing."

According to The New York Times, the Trump administration moved to roll back Obama-era school discipline policies in December, claiming they'd resulted in an increase in violence. The policies in question were put into place after the Obama administration unearthed what the Times called "strong evidence" regarding minority students being disproportionately disciplined for the same or lesser offenses when compared to their white counterparts.

In documents obtained by the Times, however, a school safety commission led by DeVos reported the policies to be "well-meaning but flawed" and claimed they "endanger student safety."

Clark isn't the first person to call for DeVos to resign. Last year, the National Education Association marked DeVos' one year anniversary as education secretary by asking for her resignation, according to the Atlanta Journal-Constitution. The teachers association has since continued to press for DeVos to step down with an ongoing petition.

But as Valerie Strauss of The Washington Post recently surmized, DeVos isn't likely to resign just yet. According to Strauss, DeVos said she was glad to be education secretary while speaking Friday at the National Review Institute’s Ideas Summit. "I am indeed," Strauss reported DeVos said when asked if she was "glad" to be working in her current post. "Yes, most days I am."