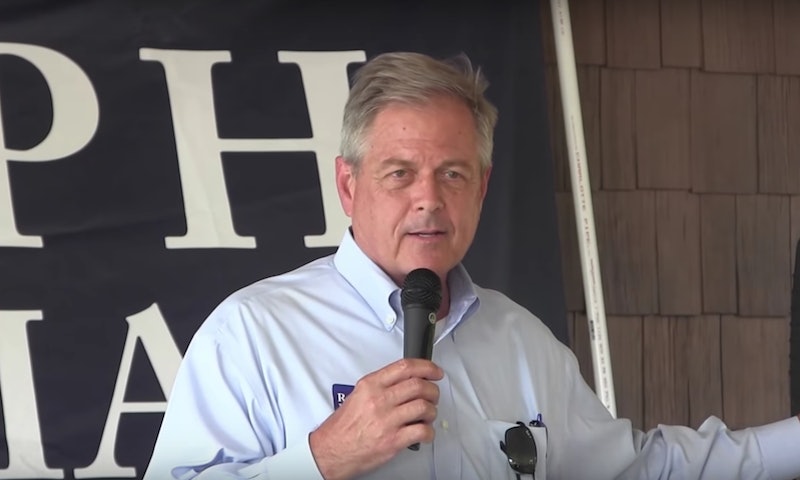 California professor Christine Blasey Ford has accused Supreme Court nominee Brett Kavanaugh of sexually assaulting her when she was 15 (an allegation he denies), injecting a degree of uncertainty into his confirmation hearings. Not everybody is concerned with Ford's accusation, however: At an event Thursday, South Carolina Rep. Ralph Norman "joked" about the Kavanaugh allegation — and was promptly rebuked by Twitter for doing so.

“Did y’all hear this latest late-breaking news on the Kavanaugh hearings?” Norman said at an election debate Thursday, according to the Post and Courier. “Ruth Bader Ginsburg came out saying she was groped by Abraham Lincoln.”

Ford alleges that Kavanaugh pinned her to a bed and groped her, attempted to forcibly remove her clothes, and pressed his hand against her mouth when she tried to scream; she says she was 15 at the time and he was 17. Kavanaugh denies the allegation.

With his comments, Norman seems to be suggesting that because the alleged assault of Ford is said to have taken place a long time ago, we shouldn't take the allegation seriously — a strategy that many of Kavanaugh's supporters on Twitter have used in an attempt to discredit Ford. Norman is also appearing to take a shot at Ginsburg's age and implying that Ford's claims are no more credible than a modern-day groping allegation against a 19th-century president would be. In actuality, there are plenty of reasons why sexual assault survivors don't go public with their allegations until years after the fact.

Norman's "joke" was not well-received on social media, with many criticizing him for using sexual assault as a punchline. Bustle has reached out to Norman's office for comment.

"Ralph Norman has revealed himself to be a monster," one user tweeted. "So in case anyone had any kind of misgivings about that."

"Nothing funnier than pinning down a teenage girl and trying to rape her," author Molly Jong-Fast wrote. "The optics on this are amazing."

"That @RalphNorman felt he had license to joke about A WOMAN SUPREME COURT JUSTICE GETTING SEXUALLY ABUSED truly tells you everything about the modern Republican party," activist and journalist Marisa Kabas wrote on Twitter. "How would you feel @RalphNorman if someone made a similar joke about your granddaughters whose faces you proudly display on your cover photo? Would you laugh?"

This isn't the first time Norman has been criticized for his conduct at a public event. In April, the first-term congressman pulled out a loaded gun while addressing constituents and pledged that he's "not going to be a Gabby Giffords" — a reference to the former Arizona congresswoman who was shot in the head at a campaign event in 2011. Norman was promptly scolded for making that comparison, and several of his constituents said that he made them feel unsafe by bringing out a loaded firearm at the event. However, Norman didn't apologize.

Ford's allegation against Kavanaugh has thrown a wrench in his Senate confirmation hearings. Although he's still likely to be confirmed, it's possible that the Senate Judiciary Committee may hold an additional hearing to allow Ford to testify regarding her experiences with Kavanaugh. Ford's lawyers say that she's willing to testify, but only conditions that are "fair and which ensure her safety." Senate Republicans attempted to schedule her testimony for Monday, but her lawyers say that's "not possible" given her schedule. As of this writing, it's unclear whether her testimony will ultimately happen before the full Senate votes on Kavanaugh's nomination.