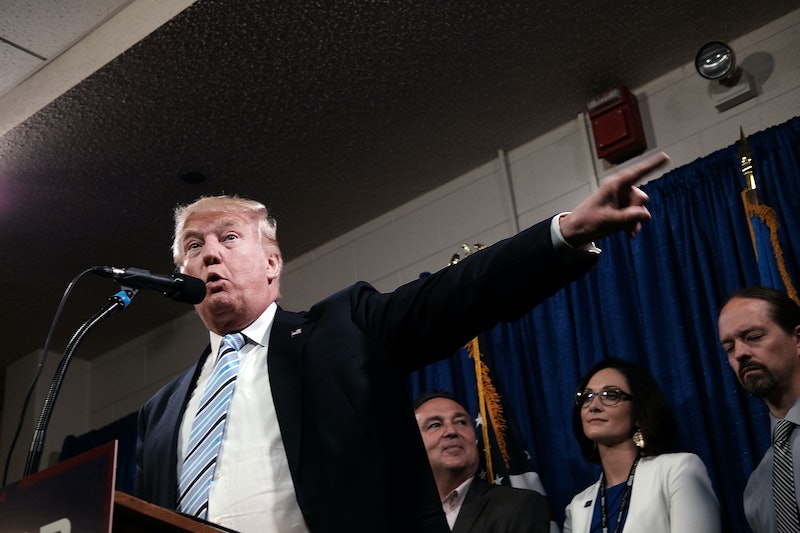 President-elect Donald Trump reignited talks of his proposed U.S.-Mexico border wall on Friday morning, tweeting that the "dishonest media" has failed to report that it will be Mexico, not America, that ultimately pays for "the Great Wall." But reports indicate what many feared all along — that it will be the American taxpayers who shell out their money for Trump's fever dream of a border wall. Perhaps this whole fiasco should just be called "the Great Irony," as Trump and Republicans ludicrously show that they would rather pay for a border wall than health care. In effect (but perhaps not surprisingly), Republicans would rather pay to keep non-citizens out of the country than pay for those citizens inside of it.

Further, Trump may be breaching one of his major campaign promises: the repeated, loud assurance that Mexico would pay for the wall, not the United States. According to a report from Politico, Republicans have walked back that plan, instead relying on passing a multi-billion dollar budget from Congress.

But Trump contradicted this plan from top Republican officials on Friday morning, tweeting: "The dishonest media does not report that any money spent on building the Great Wall (for sake of speed), will be paid back by Mexico later!"

All of this renewed talk regarding the border wall's finances seems even more tone deaf considering how hyper-focused the incoming administration has been on repealing the Affordable Care Act in the last few weeks. This move to erase Obamacare could leave some 20 million Americans without health insurance coverage, but at least we'd have the funds to pay for the border wall, dammit.

A tweet from @realDiabuddha exemplifies just how twisted this way of thinking is:

So while Trump may get his border wall after all thanks to a Republican-controlled Congress, American taxpayers will likely be footing the bill (for now, at least, Trump's tweet claims).

Instead of using taxpayer dollars to fund health care services, or even improve on the existing model, it seems Republicans are content to take money from American citizens for a border wall, then ask them why they can't afford health insurance when they get sick.

That way of thinking is clearly only going to hurt Americans in the long term, regardless if Mexico actually ends up paying for "the Great Wall" later on. But no matter, as long as Trump gets that nice, shiny, new wall.