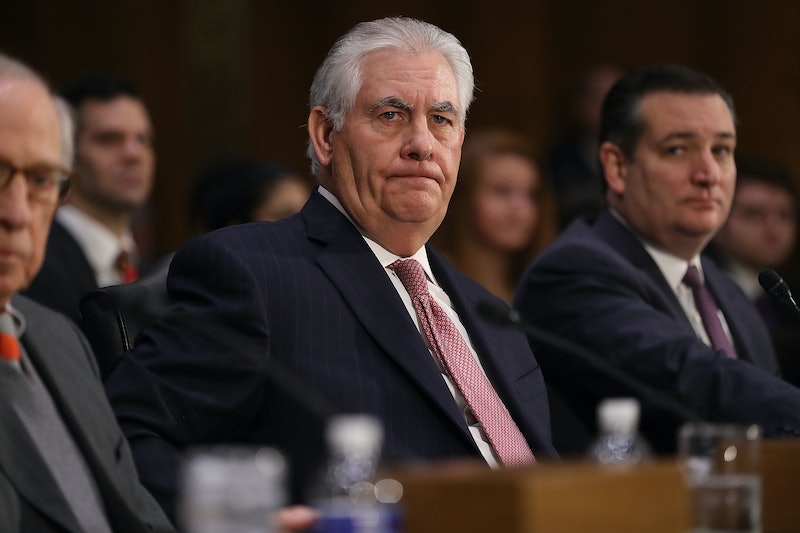 The first step to solving a problem is admitting there is one. But Donald Trump seems to have missed that day in rehab, and instead nominated former Exxon Mobil chairman, renowned climate change denier, and Russian Order of Friendship award recipient Rex Tillerson to be secretary of State. It's only fair to ask: Are people protesting Tillerson's confirmation hearing?

The lack of common sense and general wherewithal indicated in such a nomination is deeply troubling, and people are making their voices heard through protests in and around Tillerson's senate confirmation hearing.

He's been under the microscope for his ties to Russia and the wild conflict of interest those ties present. To be fair, in a relatively (which isn't saying much) encouraging move at the hearing today, Tillerson admitted that Russia “poses a danger.” It took some pressing from Sen. Marco Rubio, and even though he attempted to dodge the question at first, Tillerson finally came around, admitting that his Order of Friendship comrade likely knew about Russia's hack into the U.S. election.

But it's not just that. Having been a chairman for Exxon Mobil, the gravity of climate change is in danger of being swept under the rug. Although the official site for Exxon acknowledges that "the risk of climate change is clear and the risk warrants action," the Sierra Club, an environmental group, isn't buying it. In a statement, Sierra Club Executive Director Michael Brune says:

At a time when the climate crisis is deepening, both the United States and the world deserve much better than having a fossil fuel tycoon run U.S. foreign policy. Rex Tillerson has been knee-deep in the oil and gas industry for more than four decades, working for Exxon, which not only deliberately concealed its knowledge of climate change for decades, but pushed climate science denial while being responsible for one of the costliest environmental disasters in history. Tillerson can't be trusted to protect the health and interests of all Americans when he has demonstrated over and over again he is more invested in Exxon’s massive profits and the dirtiest fuels known to humanity. His blatant disregard for the law and his unabashed pursuit of profits over the needs of people have more than disqualified him to be America’s top diplomat. The Senate Judiciary Committee and all Senators who care about their constituents should stand up for families across the nation and oppose this nomination.

And he's not the only one who's not taking the bait, as per the variety of protests happening around the nomination.

Multiple times during the hearing, testimony halted as protesters yelled from the gallery in opposition to Trump's choice for secretary of state.

From Fossils To Fossil Fuels

Tillerson isn't the only Cabinet nominee who's a climate change denier. You can add Sen. Jeff Sessions and ex-Gov. Rick Perry (the guy who's ironically up for secretary of the Department of Energy) to the list, to name a few.

Suffice to say, people are not happy about Tillerson's nomination, and these protests at his confirmation hearing prove just that.