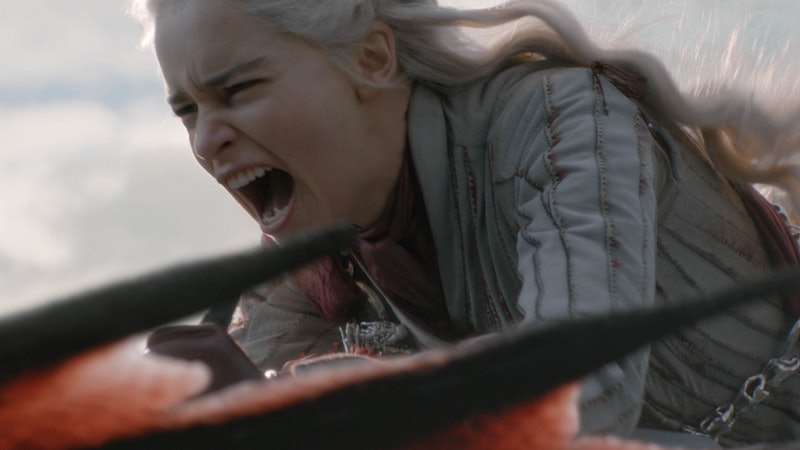 The North has just begun their journey to King's Landing, but things have already gotten very bloody. As she made her way to King's Landing to take the Iron Throne, Euron Greyjoy killed Dany's dragon Rhaegal, proving that the Last War is going to be incredibly violent.

As Tyrion (Peter Dinklage) outlined in his plan, most of Dany (Emilia Clarke)'s army — including the Unsullied and Dothraki — would head to King's Landing in ships, with the Queen and her dragons flying above to keep an eye on them, and Jon (Kit Harington) and the North's army following behind on land. Unfortunately, things took a very violent turn when they were surprised by Euron Greyjoy and his navy, who shot arrows through the sky to attempt to take down Dany and her dragons, and managing to kill Rhaegal in the process.

The dragon's shocking and bloody death signaled that Cersei (Lena Headey) and her army would not be playing fairly in their attempt to hold onto power and to wipe out any threats to the Iron Throne from the North. It also gave Dany an even more personal reason for wanting to take control of King's Landing — where before, she was fighting to redeem the Targaryen name and take back the Throne, now she's fighting to avenge the death of one of her children, who was brutally murdered in front of her.

Dany's title as "Mother of Dragons" isn't just a cool nickname; the dragons truly are her children, hatching from a set of eggs after she survived being burned alive by the Dothraki in Season 1. Over the past seven seasons, she has raised, trained and tamed the dragons, traveling with them across the Seven Kingdoms to arrive in the North. And now, she finds herself with just one dragon left, after having watched the Night King kill, revive, and use Viserion against her in the Battle of Winterfell, and seen Rhaegal shot out of the sky.

Dany's emotional reaction to losing anther one of her dragons is understandable, and her plan to use Drogon to set fire to Cersei and King's Landing would likely be an effective one. However, as Tyrion pointed out, doing so would make her the enemy of the people of King's Landing, and thus, make it even harder for her to win them over as the new Queen of the Seven Kingdoms. Because the only thing that Dany cares more about than her dragons is taking back the Iron Throne, she was willing to listen to Tyrion and Varys' plan to appeal to Cersei.

At the end of the episode, though, Dany lost another loved one who has been with her since the beginning of her journey: Missandei (Nathalie Emmanuel), who was her handmaiden when she was with the Dothraki, and has become her right hand woman. Now that Cersei and Euron have demonstrated a willingness to murder everyone that Dany loves in cold blood, it seems as if there really will be nothing that the Mother of Dragons will stop at in order to make Cersei pay. Just like Tyrion noted that the only people Cersei truly loved were her children, Dany has been given a reason to ignore politeness and propriety and fight with everything she has.

The Battle of Winterfell might be over, but Rhaegal's brutal and bloody death proves that the fighting has truly just begun as Game of Thrones enters its final episodes. Clearly, the Night King wasn't the only murderous ruler the North needed to watch out for.