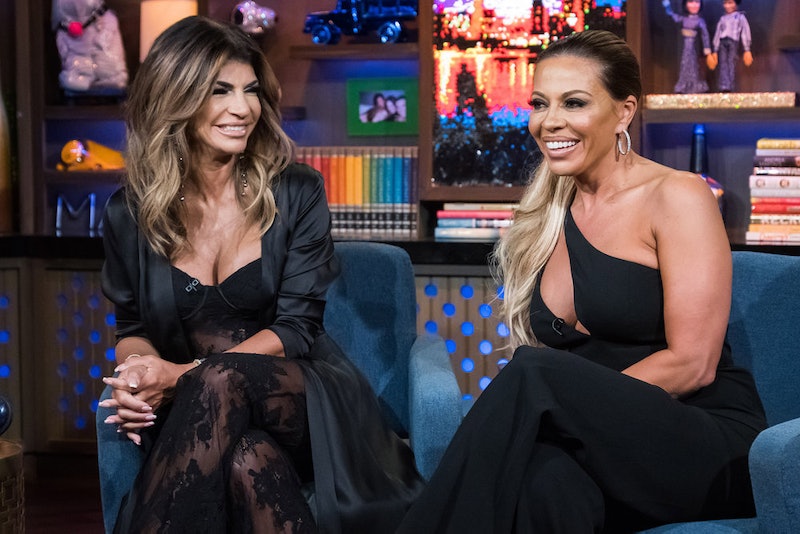 Real Housewives of New Jersey stars Teresa Giudice and Dolores Catania have always said that they're like family. This makes sense since they have known each other since they were teens. Even their children are close. And on May 30, Teresa Giudice and Dolores Catania's kids went to prom together, as Teresa shared on Instagram. That's right. Frankie Catania was Gia Giudice's date at the milestone event. And no, there are not classmates at the same school.

Twenty-year-old Frankie is a student at Sacred Heart University and Gia is a high school senior going to Rutgers University in Fall 2019. Teresa documented the pre-prom party with photos and videos on her Instagram Story. In one video, Teresa said, "Hi, Frankie, that's my daughter's prom date. Look how handsome he is." Wow. What does this mean? Does this even mean anything? Or is it simply two family friends attending an event together?

Thankfully, it's very likely that this will be shown on Real Housewives of New Jersey Season 10 since Teresa mentioned the "filmers" in another video that she shared to her Instagram Story. Not only that, but who wouldn't want to see this? Even if they did just go as friends, the viewers have watched Gia since Season 1. Meanwhile, Dolores' son Frankie became an instant fan favorite in Season 7 thanks to his sweet demeanor and passion for fitness.

Even though Frankie is very into his healthy lifestyle, Teresa shared a glimpse at him enjoying the snacks before prom.

Frankie also posted a solo selfie showcasing his prom look. Where was Gia though? Oh, yeah, taking photos with her friends. Teresa shared a bunch of those too.

The Giudice family hosted a pre-prom event that was full of parents and kids. Just look at all the parents documenting the big night. Clearly, Teresa was not the only one taking photos and videos.

The RHONJ OG also shared a group photo that included Gia and Frankie. Standing with each other in coordinating outfits.

In one of her Instagram Stories, Teresa shared a video of Gia and Frankie waving to her from the top of the stairs.

Go-to Bravo makeup artist Priscilla DiStasio, who glammed up Gia for the big night, shared a photo of the dates beore they went to the dance.

Whether this friendship or something more, it's still exciting for the avid RHONJ fans to see Frankie and Gia hanging out.

This isn't the first time that fans suspected that the RHONJ offspring could be more than just friends. On May 3, Gia posted a photo with Frankie from her aunt Melissa Gorga's fashion show for her clothing Boutique Envy. In the caption she joked "snagged a picture with one of the @envybymg models."

Frankie posted that same photo on May 4, along with a shirtless photo, of course. After thanking Melissa for asking him to walk in the fashion show, Frankie remarked, "Was also great catching up with @_giagiudice, congrats on Rutgers!"

That sounds like a sweet sentiment a long time family friend would share. However, there were people in the comments were hoping for romantic combination between the two of them.

One Instagram user wrote "You kids should date, I'm just sayin." Another commented, "You guys would make the cutest couple... just saying!" Someone even declared that they were "perfect for each other."

It makes sense that fans are happy to see two beloved RHONJ fixtures hanging out. Nevertheless, there has not been any confirmation or denial of a romance, but if this ever did happen, it does seem like the New Jersey Housewives would be on board. They have been very open about their close bond since Dolores joined the show for Season 7.

During that season, Teresa remarked, "Dolores and I are cut from the same cloth. We're true Italians. We'll stick with you until the end."

In a 2016 interview with Bravo's The Daily Dish, Dolores dished on some of her memories with Teresa. Dolores shared, "I was the first to get married and here's my cousin Tanya and Teresa Gorga coming over to hang out at my Shore house, getting ready to go to Temptations. I mean, OK, if that's not a flashback." Yes, she said Teresa Gorga. She's known her for so long.

They've known each since they were sixteen and they've known each other's kids since they were born. Whether Gia and Frankie are dating or not, Teresa and Dolores have to be so happy that their two children get along so well! In the mean time, the RHONJ fandom will continue revel in their closeness... and to hope that there's a love connection there.

More like this
Teresa Giudice Flipped A Table — Again —  On The 'DWTS' Season 31 Premiere
By Jake Viswanath
'RHOSLC’s Newest Cast Member Has Tried To Become A Housewife Before
By Jake Viswanath
‘RHOSLC’ Star Jen Shah’s Arrest & Legal Drama, Explained
By Brad Witter and Jake Viswanath
Bachelorette Gabby Kissed Her New Fiancé On 'Dancing With The Stars'
By Jake Viswanath
Get Even More From Bustle — Sign Up For The Newsletter