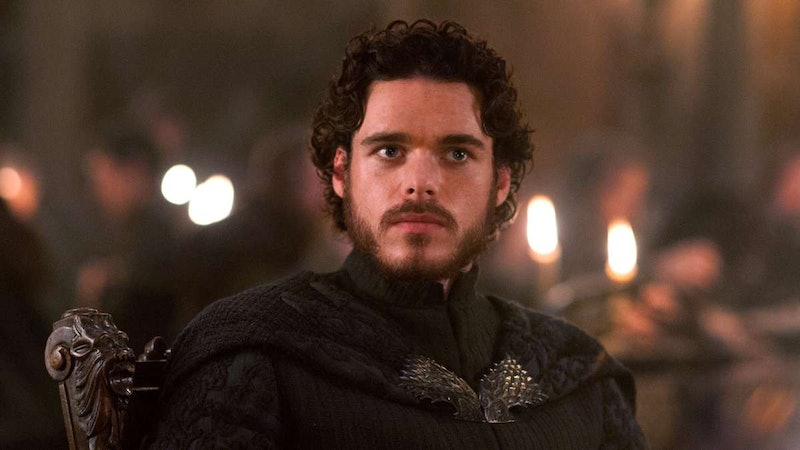 Everyone's got opinions on the Game Of Thrones finale including Richard Madden. Spoilers for Game Of Thrones finale ahead. Unlike many fans, though, Robb Stark himself, Madden hasn't seen the GoT finale. But don't be too mad at him, he's been a little busy saving lives on The Bodyguard and starring in the Elton John biopic The Rocketman to keep up with what's going on in Westeros.

No surprise, when Madden stopped by Good Morning America on Thursday, May 23, everyone wanted to talk to him about his old show Game Of Thrones. Turns out, though, the actor, whose character was killed off at the Red Wedding back in Season 3, hasn't actually seen it yet. And yes, he knows he's in the minority. "I haven't watched it yet," Madden shouted, sounding rather disappointed in himself. "I've not done it yet."

He plans to, but first he needs to find the time in his currently busy schedule. "I've been busy running about doing things, I haven't had the chance to," he said, which is a very valid answer. But, like anyone else who hasn't yet watched the finale in the past five days since, it's already been spoiled for him.

So, when GMA asked him if he's surprised about Bran ending up on the Iron Throne, the actor was prepared with an answer that was the epitome of making lemonade after being handed a whole bunch of lemons. "Yeah, I'm totally surprised," Madden said. "I'll have to watch it now to see how he ended up there."

Madden is now prepared to work backwards. Some fans might argue he still won't understand how the Three-Eyed Raven ended up the ruler of the realm (because they don't either). So, yes, once Madden's watched the finale, fans are going to have to ask him to explain that finale to them with that accent of his. Maybe it'll once and for all put an end to the Game of Thrones petition asking HBO to remake Season 8. Lady of the North Sansa Stark herself, Sophie Turner would probably like that.

Of course, this GoT ending is far less brutal than the one Madden shared last year. In a 2018 interview, Madden revealed his Game Of Thrones finale prediction. "Jon Snow saves the day and kills everyone," he told iNews at the time, before admitting he had no idea what would happen in the finale.

You know who did, though? Gwendoline Christie. During an Extra interview with Mario Lopez back in July 2017, the actor who plays Brienne of Tarth predicted Bran Stark would end up on the Iron Throne. It was a pretty bold guess. Most assumed it would be Jon Snow, Daenerys Targaryen or worst case scenario, the Night King. Even her partner in the interview, Nicolaj Coster-Waldau, better known as Jaime Lannister, went with Dany and the Night King. "I'm wondering if it might be Bran," Christie said nonchalantly.

While it might have seemed like a real out of left field guess, Christie admitted that's what she thought it could happen. "But don't you think it's going to be someone out of left field?" she told Extra. "Don't you feel that those seem like the obvious choice and what we know about the show is that it constantly surprises you?"

Seriously, Christie knows her stuff. Game Of Thrones' final season left fans surprised and full of questions. Fans will just have to check in with Madden once he's watched to see if he has some answers.