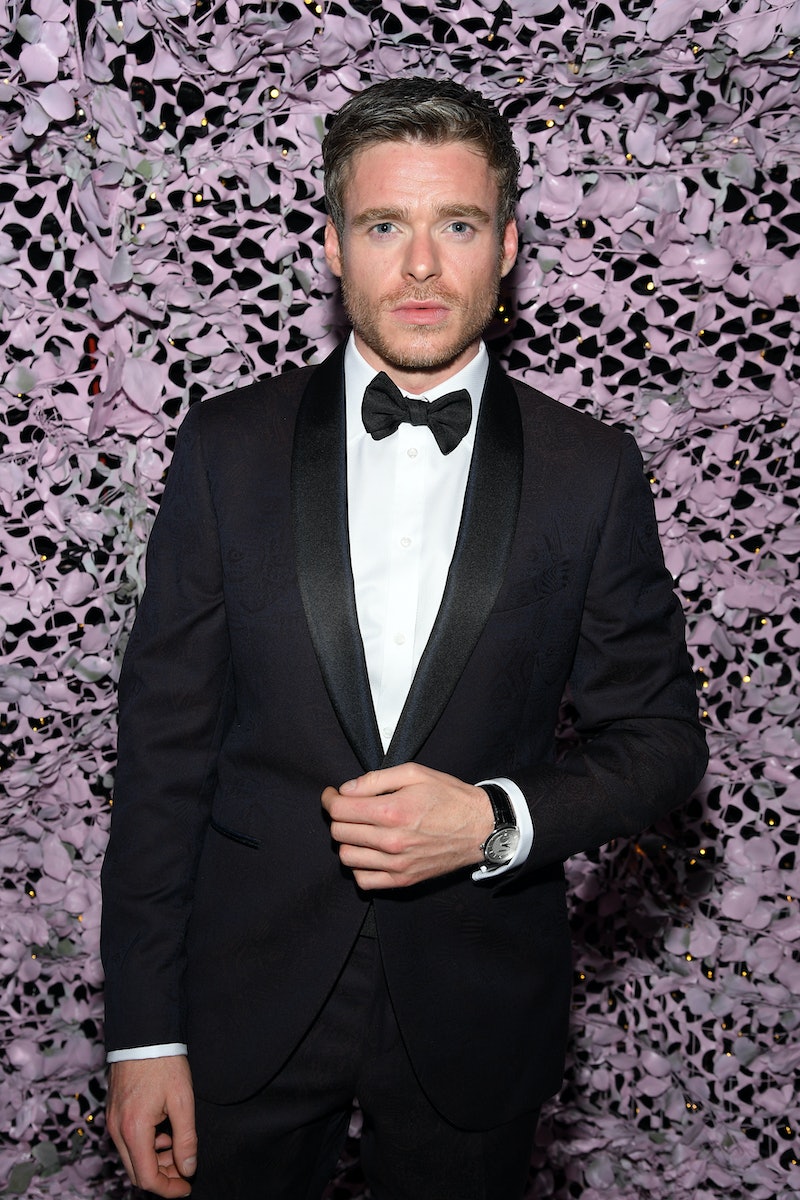 The former King of the North is now playing Elton John's manager. But, Richard Madden's Rocketman role has a Game Of Thrones connection that will surprise anyone who's seen Bohemian Rhapsody. Specifically those who remember which GoT star played Queen's music manager.

In the upcoming Elton John biopic Rocketman, in theaters May 31, Madden plays John Reid, John's manager and boyfriend who isn't exactly painted in the best light. Reid also briefly appeared in Bohemian Rhapsody, directed by Dexter Fletcher, who also did Rocketman. But in that film he was played by Aidan Gillen, who Game of Thrones fans might know better as Petyr "Littlefinger" Baelish.

Surprise, two Game Of Thrones actors have now played Reid at different points in his life. The 32-year-old Madden plays him when he was just starting out in the early 1970s — John was his first client — while the 51-year-old Gillen plays him just a few years later in 1974 when Reid became Queen's second manager.

For those that were thoroughly shocked by this discovery, don't worry, you're not alone. "Robb Stark growing up to become Littlefinger truly is a Game of Thrones twist I did not see coming," Mashable's deputy entertainment editor Angie J. Han tweeted. And honestly, that's saying something after all the unexpected turns GoT's final season took, only some of which Madden is aware of since he hasn't seen the Game Of Thrones finale yet. And yes, he knows he has to watch, but he's been a little busy, you know, promoting Rocketman.

For those who plan on seeing Rocketman, know that Madden's Reid is cast as the villain of this story. In the film, Reid and John have a complicated relationship in which Reid cheats on John, who is struggling with drugs and alcohol. At one point, Reid punches John in the face for being late to a show.

Reid, who is still alive, has not yet commented on how he's portrayed, but, according to Elle, Reid told the Daily Mail. "I'm...proud of the work I did with him. One day I'll bump into him and there may be hugs and kisses. Or maybe not."

In real life, Reid's professional relationship with John lasted longer than the movie shows. Their romantic relationship only lasted five years in the early '70s, but Reid was actually John's manager until 1998 when the two broke ties after John became suspicious that Reid was stealing from him. In a 2000 court case, John claimed Reid had stolen millions of pounds from him throughout his career, according to the Telegraph. "I never thought he would betray me but he has betrayed me," John stated in court. Reid later paid John £3.4 million in a settlement.

While it's unclear what is fact and what is fiction when it comes to John's relationship with Reid, Game Of Thrones fans might want to know that Madden has a nude scene in Rocketman. The actor also assumed his mom would want to know this, too.

In a May 23 interview with Good Morning America, Madden said, "She got a warning this time. She was told it was coming.... not making that mistake again." That mistake, as he told Ellen DeGeneres last year, was when he didn't tell his parents about a steamy Bodyguard sex scene.

Now, those going to see Rocketman have also been warned that they'll see a lot of Madden and maybe just a little of the real John Reid.